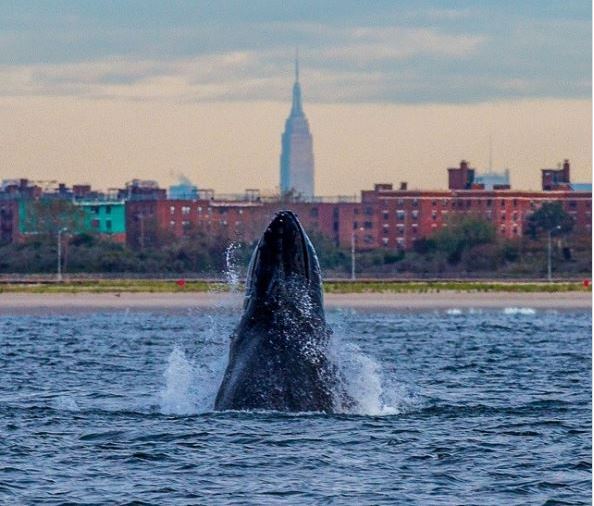 I am on a boat, a white 95-foot double-decker aluminum cruising vessel zooming across the New York bight—an indentation along the Atlantic Coast which makes New York City especially prone to storm surges like those that accompanied Hurricane Sandy. But we’re not hunting storms: we’re stalking whales. Urban whales.

For the first time in a century, humpback whales have returned to the waters of New York harbor. And not just occasionally, either. They’re coming in enough numbers that a company can reliably trot tourists out to the ocean—within sight distance of Manhattan’s skyscrapers—to see them. 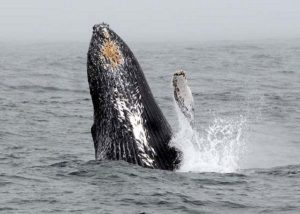 “Because of the improvement of the water quality, algae and zooplankton have multiplied, giving good food for the menhaden [a small oily forager fish beloved by whales], which have returned in numbers that the fishermen say they have not seen in their lifetimes,” says Paul L. Sieswerda.

Once a curator at the New York Aquarium, Sieswerda has since founded Gotham Whales, an organization that conducts tours and monitors the presence of whales, seals, and dolphins in NYC. “Our surveys show an exponential increase in the number of whales since 2011 when we first began our studies,” he said. “Prior to that, whales were only seen intermittently.”

Once all but extinct in New York City’s waters, the whales are undeniably back. The same year that the curious humpback captured our attentions, Sieswerda counted 106 whales in the waters off New York City.

In November of 2016, a whale was caught swimming near the Statue of Liberty. And it’s not just whales: dolphins and seals have also come along for the ride. It’s shocking to longtime New Yorkers, who remember when the city’s rivers and beaches were an ecological punchline. 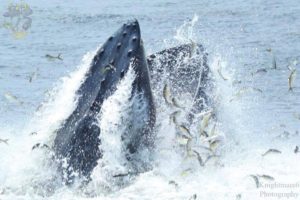 The mission of Gotham Whale is to study, advocate for, and educate about the whales and marine mammals of New York City, through Citizen Science. As the largest city in the United States, New York has a long heritage of maritime history. From colonial times its waters have been exploited, depleting its fisheries and diminishing its population of marine mammals.

Recently, the efforts of regulators, environmental groups, and New York citizens have greatly improved the conditions of the Hudson River and waters in and around New York Harbor. With these improvements, the biological food chain has rebounded, supporting a diverse ecology, from oysters to whales. The waters of New York now are a feeding ground for seals, dolphins, and whales.

Gotham Whale intends to inform and contribute to the public knowledge as whales meet New Yorkers. The juxtaposition of wild populations of marine mammals; seals, dolphins, and whales, with the millions of people that inhabit The City, can be the source of intriguing knowledge, incredible enjoyment, and sometimes, tragic disruption. Gotham Whale will be a source of education, advocacy, and science for the inhabitants of New York, terrestrial and marine. 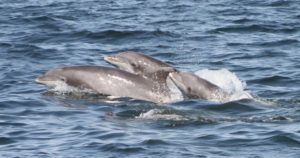 Citizen Science is a movement to include average citizens in scientific research allowing them to make systematic observations, to collect and process data, and provide general support for scientific study. The Audubon Society’s Christmas Bird Count, running since 1900, is an excellent example.

Gotham Whale will emulate that model with the vast citizen pool that is New York City. The whale watching activities of the American Princess and other boatmen provide a platform to collect data and make observations. The many eyes of the pubic make sightings more probable. Gotham Whale will serve as a depository for that data.

Participants provide photographs of the flukes of humpback whales that have unique patterns, serving as individual identification markings much as fingerprints do in humans. These data will be combined, evaluated, and shared with the scientific community through publications, cooperative studies, and the New York Humpback Whale Catalog. ​ By working closely with other concerned organizations, Gotham Whale will contribute to the improving health of New York’s marine environment, for the betterment of both humans and whales.