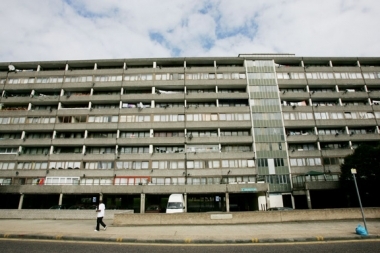 Note from Storm: The Aylesbury Estate is a large public housing project (somewhat ironically called “estates” in Britain) located in the Walworth are of South East London, England. [Just a few miles from where I grew up in Wanstead.]

Major structural problems with the buildings, combined with the poor perception of public housing in Britain as a whole, have led its becoming widely perceived as one of the most notorious estates in the United Kingdom.

Tony Blair made his first speech as Prime Minister here, hoping to demonstrate that the government would care for the poorest in Britain. The Aylesbury Estate is often cited as a typical example of urban decay.

Now, a long-planned Aylesbury Estate regeneration project is finally getting underway. It will produce 3900 new homes, and is designed to greatly enhance quality of life by adding green space. Completion is scheduled for 2032.

From the article: Councillor Mark Williams, cabinet member for regeneration and new homes, said: “Our residents need better quality affordable homes with more open green space and better community facilities. The regeneration of the Aylesbury Estate has been discussed for over 15 years and progress is now finally underway on the next phase, our first with partners Notting Hill Housing Trust, with the first steps in the demolition process now happening on site.”

Kate Davies, chief executive of Notting Hill Housing, said: “The agreement confirms our pledge to provide 50 per cent affordable homes in the regeneration. This will allow us to help existing residents stay within the footprint of the Aylesbury Estate and also provide homes to families who need them.”