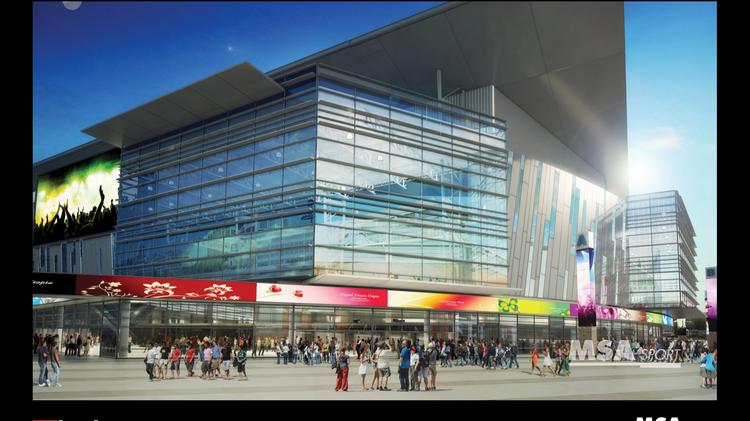 The owners of Cincinnati, Ohio‘s U.S. Bank Arena are planning a huge renovation that will expand the arena’s capacity and premium seating while tying it in to the riverfront and the Banks. The facility is largely cut off form those areas now.

Nederlander Entertainment and AEG Facilities, the downtown arena’s owners, announced plans Tuesday and released renderings designed by Cincinnati architect Michael Schuster’s MSA Sport firm. Click on the image above to take a look at the plans.

The renovation involves increasing capacity to 18,500 from about 18,000 it can hold for concerts now. The key is that it would have up to 1,750 club seats, far more than it has now.

It will also add a new suite level closer to the stage. That will create space for 40 to 60 suites. And it could add more suites on other levels in the future, the owners said in a news release. That’s a big deal. Cincinnati lost out on its bid to host the 2016 Republican National Convention, and the need for more suites was a key reason for that.

This could kill talk of a new arena being built in Cincinnati, at least for the time being. That had been discussed as a potential solution to draw big-time acts and serve as a home for University of Cincinnati basketball.

The U.S. Bank Arena renovation news comes as UC is discussing a $70 million renovation of its on-campus Fifth Third Arena. Those plans, which UC’s board of trustees still has to approve, call for potentially reducing its 13,176-seat capacity. UC would likely play basketball games off-site for a season during construction if that renovation takes place.