In the pastures of the Jemez Mountains of New Mexico, where meadows act like sponges for snowmelt and monsoon rain, lies a small oasis. And in a time of drought, it’s this brook stemming from the Rio Cebolla that provides a glimpse of hope for local wildlife and nearby communities.

Employees from various departments of the U.S. Forest Service and volunteers spread out along a narrow streambed just north of the Jemez Pueblo last week to construct nine beaver-style dams as part of a long-term restoration project. Under an open sky, outfitted in water boots and mud-splattered T-shirts, they weaved willow tree branches through wooden fence posts planted underwater, then proceeded to stack rocks on the upstream side of the handmade walls.

The goal: to restore pasture land and the environment that surrounds it. “By putting in these structures, it mimics the beaver dams that were here historically,” said Cecil Rich, Fish and Aquatic Programs Manager for the Santa Fe Forest.

And by recreating formations that once existed, Rich said, the dams can help replenish vital wildlife habitats — and at an astounding rate. “Immediately,” Rich says, “it makes the water deeper and improves the floodplains.”

Building the dams is just part of the Southwest Jemez Mountains Collaborative Landscape Restoration Initiative. Since the first eight dams were constructed in October 2017, Rich has gathered workers to plant willow trees and build sets of dams twice this year. He hopes that in June workers will create at least eight more dams, totaling 26 for the year and 34 in total.

Already, wildlife is returning to the area where dams were built just a couple of weeks ago — and chewed markings reveal that beavers are among them.

The Southwest Jemez Collaborative Forest Landscape Restoration Project is a long-term forest and watershed restoration strategy to increase the landscape’s resilience to severe wildfire and other large-scale disturbances.

The landscape area is approximately 210,000 acres in the Southwest Jemez Mountains (SWJM) comprising the entire upper Jemez River watershed and including 110,000 acres on the Santa Fe National Forest, the 86,000-acre Valles Caldera National Preserve, the Pueblo of Jemez Pueblo, and additional parcels of state, private, and tribal lands. 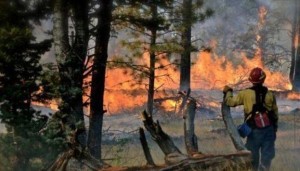 Prescribed fires are helping to restore forests damaged by decades of Smokey the Bear-style fire-suppressing mismanagement.

The project area includes ponderosa pine, mixed conifer, aspen and piñon-juniper forests as well as grasslands, meadows, riparian areas and aquatic habitats. The effect of human activities has significantly changed the ecological complexion of the landscape within the Jemez Mountains. Over time, the suppression of natural wildfires has dramatically altered the diversity, age, and productivity of native plant species.

The forests have experienced dramatic increases in tree densities, thick understories, and ground litter. Decades of livestock grazing have left river and creek embankments without enough vegetation to hold the soil and shade the waterways to provide optimal temperatures for native trout and other aquatic species. Invasive plants and noxious weeds have encroached across the landscape, diminishing the quality, quantity and diversity of native forage for both wildlife and livestock.

The overall goal is to restore the forest to conditions that were common to this geographical area prior to the first European contact. The SWJM project was designed to meet four primary purposes:

Prescribed fire is one of the most effective tools available to resource managers for restoring fire-adapted ecosystems like the Jemez Mountains. These fires mimic natural fires by reducing forest fuels, recycling nutrients and increasing habitat diversity. Learn more about other forest restoration activities.

Nearly 40,000 acres have been treated with prescribed fire, managed wildfire and mechanical thinning since 2010. Archaeologists have overseen site protection on approximately 850 cultural sites to date, and work has begun on the first task orders under the stewardship contract.