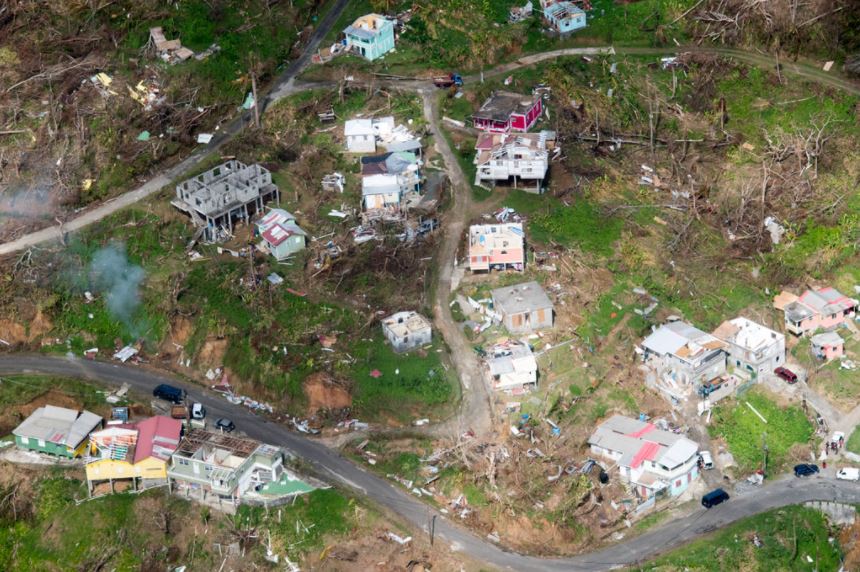 On September 18, 2017, the category-5 Hurricane Maria made landfall on one of my (Storm) favorite places on the planet: Dominica, which is truly the gem of the Caribbean.

Maria thrashed the country with extreme winds and rain. It left people without electricity and water, destroyed homes and health clinics and isolated communities on the mountainous island. The UN and its partners recently launched an appeal for $31.1 million to reach over 90 per cent of Dominicans – some 65,000 people – in the next three months. 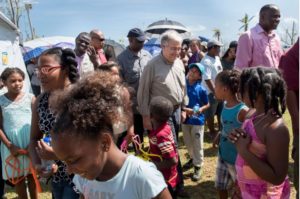 If there’s any good news to be derived from this tragedy, it’s that Dominica has decided to become a global model of climate resilience. One would think that such a declaration would have already been made in the United States, after the devastation in Texas and Florida. The difference is that, unlike the U.S. Congress, Prime Minister Skerrit’s election campaigns are not paid for primarily by fossil fuel companies. (A U.S. Senate seat costs about $50 million, which buys a lot of willful ignorance.)

On October 8, 2017, United Nations Secretary-General António Guterres visited Dominica, taking stock of the immense damage caused by Hurricane Maria last month and the relief efforts underway, as well as paying tribute to its leaders for their vision to not only rebuild but to become the world’s first climate-resilient nation.

“I have never seen anywhere else in the world a forest completely decimated without one single leaf on any tree,” said Mr. Guterres, who flew by helicopter over some of the most affected areas. “In every community, most of the buildings are destroyed or heavily damaged.”

Speaking at a joint press conference with Prime Minister Roosevelt Skerrit in the capital, Roseau, Mr. Guterres echoed concerns similar to those expressed during the previous day’s visit to Antigua and Barbuda, where he witnessed the destruction caused by Hurricane Irma, and met with displaced persons. “One is to make sure the international community fully recognizes that the intensity of hurricanes and multiplication of hurricanes in the Caribbean in this season is not an accident. It is the result of climate change.”

Prime Minister Skerrit responded, “And so we have a unique opportunity to be an example to the world, an example of how an entire nation rebounds from disaster and how an entire nation can be climate resilient for the future. We did not choose this opportunity. We did not wish it. Having had it thrust upon us, we have chosen actively and decisively to be that example to the world.” 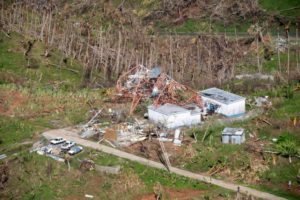 Citing research by the UN World Meteorological Organization (WMO), the Secretary-General said that natural disasters had tripled, while the economic damaged caused by them has increased five-fold. “Today, there is scientific proof that climate change is largely responsible for the dramatic increase in the intensity and devastation caused by the hurricanes in the Caribbean and by many other phenomena around the world.”

In addition to seeing the destruction by air, Mr. Guterres, accompanied by the Prime Minister, visited Salybia in the Kalinago territory, where they met with local authorities and members of the community during a distribution of relief aid.

“We thank you for taking the time to walk with us on this battlefield of shattered lives,” he added at the October 8 press conference. “Our devastation is so complete that our recovery has to be total,” Mr. Skerrit said.

He added that the UN has an important role in guiding Dominica on its journey to become the world’s first climate-resistant nation, with good analysis on how to achieve and monitor national climate resilience.

Together, the Secretary-General and the Prime Minister also met with UN staff and non-governmental partners, who have set up a coordination centre at a local hotel that suffered heavy damage during the hurricane.

Noting the difficult circumstances under which they are working, Mr. Guterres expressed his appreciation to the staff, adding: “I’m very proud to be your colleague in these circumstances.”