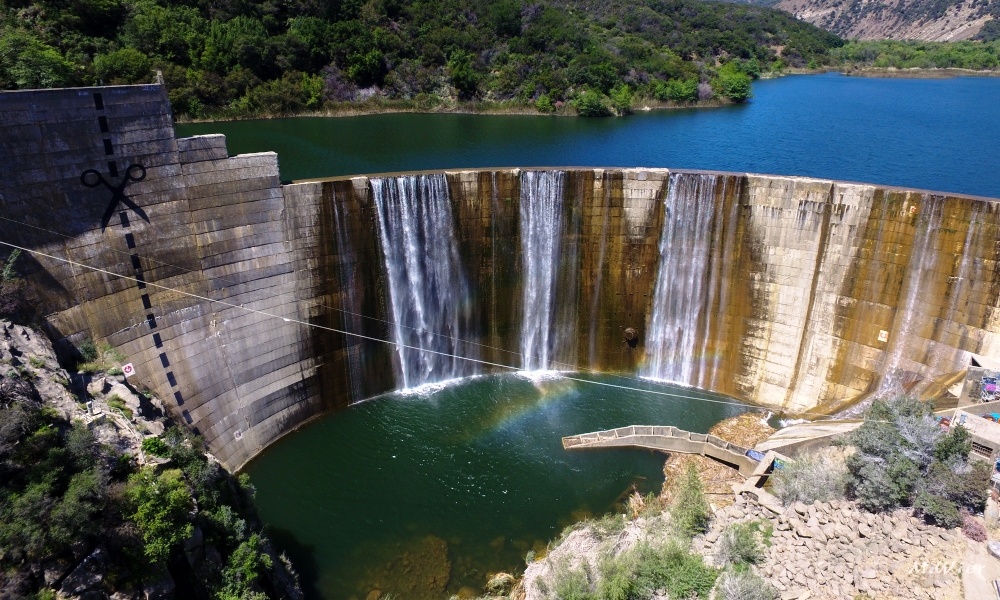 In the Ventura River watershed north of Ojai, California, the Matilija Dam has been identified as one of the Top 5 California Dams to remove in CalTrout‘s latest report.

The dam was built in 1947, originally designed for water storage and flood control.

Today, the reservoir behind Matilija Dam is nearly completely clogged with sediment, rendering the dam non-functional. This sedimentation happens to almost all dams, and is just one of the many reasons that hydropower is far less “clean” than most people think.

The useful lifetime of most dams is far too short to offset the human, economic and ecological damage done by the dam’s creation. Massive amounts of carbon dioxide and (worse) methane are related by the rotting trees and other plant life when valleys are flooded, thus exacerbating the climate crisis.

Removing Matilija Dam will restore a free-flowing river from the headwaters to the ocean, re-establish access for steelhead trout to required habitat, revitalize a healthy, native ecosystem, and expand opportunities for outdoor recreation.

With no fish ladder or bypass structure present, it is a complete barrier to the migration of endangered Southern California steelhead. Dam removal will restore access to 17 miles of fish spawning, rearing, and foraging habitat in the headwaters above the dam.

The dam also causes degraded water quality, an altered flow system, and a disorder to the sediment flows going to the lower watershed, the estuary, and beaches, which they need to replenish themselves.

Matilija Dam has impounded approximately 8 million cubic yards of sediment; the physical condition of the dam continues to deteriorate. Historically inhabiting the Ventura River watershed, Southern California steelhead are an incredibly important species because they evolved in seasonally disconnected river systems and are an adaptable species, able to survive in warmer waters than other steelhead populations.

With only an estimated 500 individual species remaining, this unique life history trait makes them a particularly valuable population to protect in the face of climate change and shifting weather patterns.

Removal of Matilija Dam will reconnect access for steelhead to their important prime habitat, 17 miles in fact of spawning, rearing, and foraging locations above the dam. This is all critical to the hefty task of recovering steelhead throughout Southern California.

A broad coalition of community groups and resource agencies have been advocating for the removal of Matilija Dam for over 20 years.

Construction is currently happening downstream to help create the pathway to total dam removal and funding for the processes is being secured- slowly but surely. Once Matilija Dam is removed, a free-flowing river from headwaters to sea will finally be restored.

The specific project CalTrout is currently implementing, the Matilija Dam Ecosystem Restoration Project, will cost millions of dollars. Unfortunately, they’ve experienced a lack of dedicated funding, which has been a major impediment to action.

Other factors, such as determining an appropriate release strategy for all the sediment build-up, needing to modify downstream roads, levees, and bridges, and impacts from the Thomas fire on the surrounding landscape, have all added to the challenges of the dam removal undertaking. In 2021, however, we saw immense progress.

With funds from the California Department of Fish and Wildlife (CDFW), construction began to replace Santa Ana Bridge, a downstream structure that must be modernized before the river can be set free since the current bridge’s span is undersized.

The new bridge will improve the ability to transport the sediment, while also expanding fish migration opportunities for Southern steelhead at a critical location and providing greater flood flows passage. This pre dam removal work is moving forward and on-schedule for completion in 2022.

Ventura County also is in the process of finalize funding awards with the State Coastal Conservancy and the Wildlife Conservation Board to fully fund final designs to update Camino Cielo. This part of the project will replace an undersized box culvert with a full span bridge, achieving similar ecologic and community benefits as the Santa Ana Bridge replacement.

With no uncertainty, Matilija Dam is set to come down; each of the construction projects downstream is creating the pathway to achieve total dam removal. Ventura County officially made the decision in 1998 to officially remove the dam. In March 2016, the group overseeing design alternatives voted in favor of a removal plan. The approved alternative will use two bore holes at the base of the dam to remove and transport the impounded sediment.

This concept represents a “natural transport” alternative that concentrates the downstream movement of the built-up sediment during the first storm events that follow. This alternative will minimize ecological impact downstream and lower the overall project cost by reducing the need to truck material in and out of the reservoir.

Current projections estimate that once the bore holes are opened, complete dam removal and a free-flowing river will be achieved in 2 to 5 years. In 2020, Ventura County was awarded $5 million from the Wildlife Conservation Board to fully fund securing Final Designs and engineering approval. The county is currently working to finalize the 65% design plan and technical analysis for dam removal.