With his flats of saplings and a red planting tool, Jon Asgeir Jonsson is a foot soldier in the fight to reforest Iceland, working to bring new life to largely barren landscapes.

The country lost most of its trees more than a thousand years ago, when Viking settlers took their axes to the forests that covered one-quarter of the countryside.

This all used to be heavily forested.

By most accounts, the island was largely deforested within three centuries. “They removed the pillar out of the ecosystem,” said Dr. Gudmundur Halldorsson, research coordinator of the Soil Conservation Service of Iceland.

Now, Icelanders would like to get some of those forests back. Doing so would improve and stabilize the country’s harsh soils to restore agriculture, and it would help fight climate change.

But restoring even a portion of Iceland’s once-vast forests is a slow and seemingly endless task. Despite the planting of three million or more trees in recent years, the amount of land that is covered in forest — estimated at about 1 percent at the turn of the 20th century, when reforestation was made a priority — has barely increased.

“It’s definitely a struggle,” said Mr. Jonsson, a forester who works for the private Icelandic Forestry Association and plants saplings with volunteers from the many local forestry groups in this island nation of 350,000 people. “We have gained maybe half a percent in the last century.” As wonderful as restoration is, preventing destruction is always better.

Iceland’s farmers struggled with erosion and windblown soil for centuries. But in the decades that followed a particularly destructive sandstorm east of the capital, Reykjavik, in 1882, the government established reforestation and soil conservation efforts. 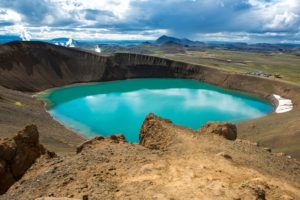 Reforesting more of the Icelandic countryside would have benefits beyond helping farmers and stopping sandstorms. As climate change has become a greater concern, Iceland’s leaders have viewed reforestation as a way to help the country meet its climate goals.

The Soil Conservation Service of Iceland (SCSI) was founded in 1907. It’s a governmental agency under the Ministry for the Environment. The main tasks of the SCSI include combating desertification, sand encroachment and other soil erosion, promotion of sustainable land use and reclamation and restoration of degraded land. The work is on different levels, from policy making and research, to extension services and management of large- and small-scale reclamation projects.

Ecosystem degradation is by far the largest environmental problem in Iceland. Vast areas have been desertified after over-exploitation – the speed of erosion magnified by volcanic activity and harsh weather conditions. SCSI is dedicated to the prevention of erosion and to reclamation of eroded land.

The Icelandic Forestry Association (IFA) is a national umbrella organisation for local and regional forestry associations throughout Iceland, who together form one of the largest non-governmental organisations in Iceland. The IFA was founded in 1930.

The IFA is an advocate of all the forestry associations, guards their interests and speaks and acts on their behalf when needed. The goal of the IFA is to further the interests of forestry in Iceland and encourage all kinds of environmental improvements.

All photos of Iceland via Adobe Stock.