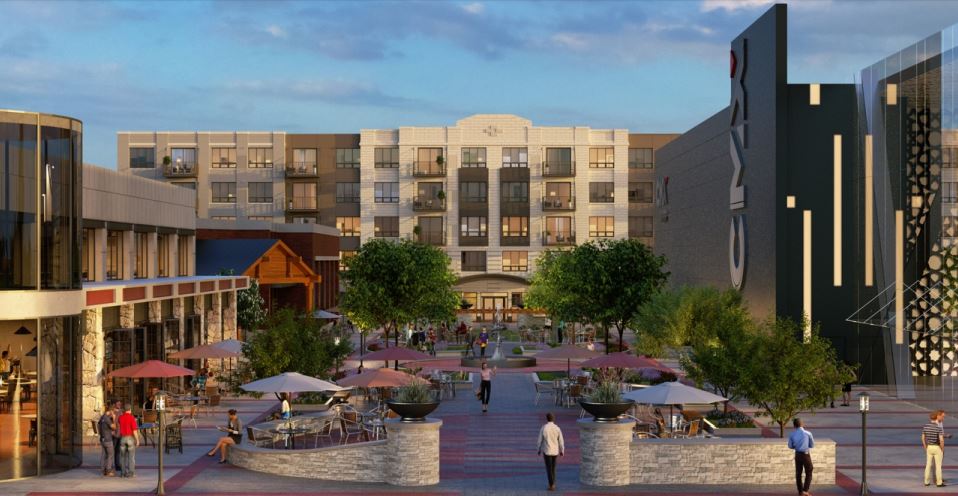 In most small towns, the bankruptcy of a major local business would be very bad news. For the town of Wheeling, Illinois, it’s a major revitalization opportunity, because the 124-year-old town is about to get a critically-important feature they’ve always lacked: a downtown.

Wickes Furniture was a national chain of furniture stores, and their headquarters was in Wheeling (population: about 39,000), a suburban community about 30 miles north of Chicago.

The company was founded in 1971, and operated 43 stores in California, Illinois, Indiana, Michigan, Minnesota, Nevada, and Oregon at its peak. Wickes declared bankruptcy in 2008, leaving behind a 16.2-acre dead zone in the heart of Wheeling.

The business’ collapse was painful at the time, but a decade later, that vacant property (the buildings have been demolished) has become the key to the town’s revitalization. After years of planning and overcoming obstacles, the construction of a downtown is finally underway, an investment of some $110 million. 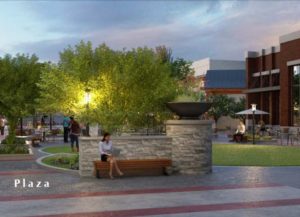 “The town center will revitalize the community and become a destination for the area,” said Patrick Horcher, Wheeling village president.

The site is surrounded by existing structures that set the stage for a long-needed downtown area, such as the village hall, police and fire stations, park district recreational building, aquatic center, ball fields, a lake, and a commuter rail station on Metra‘s North Central Service line. 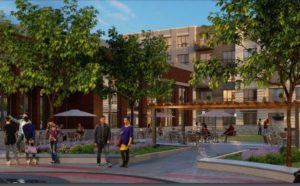 As this is being written, the foundation is being laid, and the grand opening is scheduled for late 2018. A five-story, 300-unit apartment building will wrap around a 25,000-square-foot plaza with a pool, putting green, bocce court, fire pit, barbecue grills, and a gazebo.

The courtyard is intended to provide a central gathering place for residents and the surrounding community. All towns and cities need a readily-perceived center: Wheeling will finally have one.

“The town center will enhance property values and be a catalyst for future development,” said John Melaniphy III, Wheeling’s director of economic development. “It will change Wheeling’s image, which has previously been known as blue collar because of our industry.”

All renderings courtesy of the town of Wheeling. 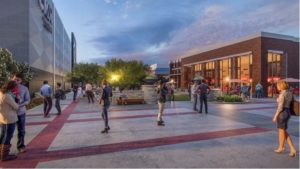 The center’s 100,000-square-foot retail area will be anchored by a 10-screen CMX movie theater with reclining seats, plus dining and cocktail options. Chicago-based City Works Eatery and Pour House has already committed to a site across from the theater, and additional restaurants and shops will emerge just a short walk from the new apartments.

“It has been a long time in coming,” Horcher continued. “After the village bought the Wickes property in 2008, it was a challenge to find a developer to do the town center. The site stood vacant for a while and was costing the village in lost property tax revenue.”

“I can’t wait for the opening. It will be a huge new focal point in the village,” said Neal Katz, a 30-year resident of Wheeling. He believes that “People will be moving back.”