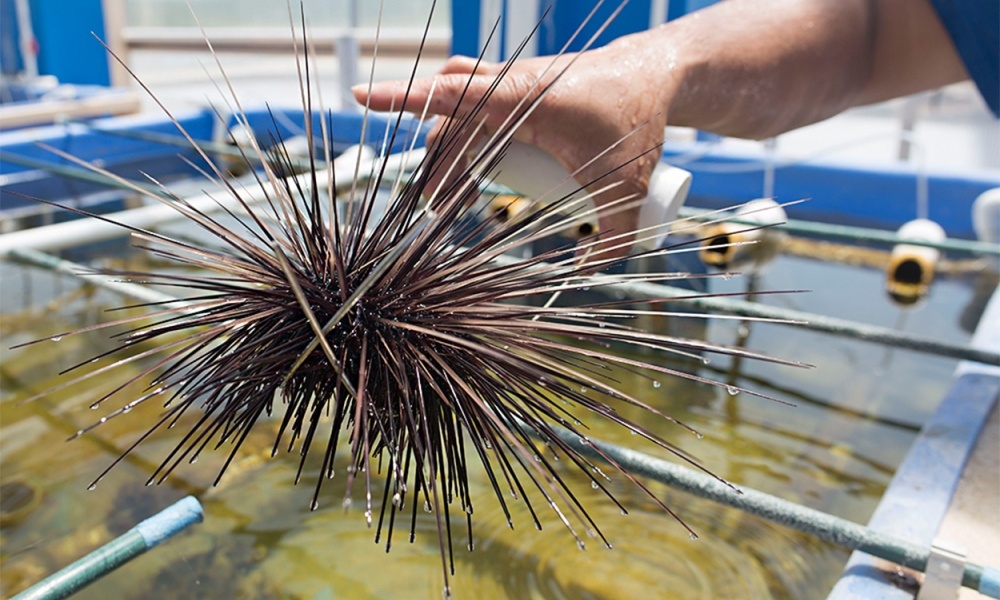 In a significant achievement for reef restoration, researchers at The Florida Aquarium in Tampa—along with the University of Florida and the Florida Fish and Wildlife Conservation Commission—successfully reared and released nearly 200 Long-Spined Sea Urchins (Diadema antillarum) off the coast of Florida.

The timing is especially good, because on March 29, 2022, a group called Atlantic and Gulf Rapid Reef Assessment—which monitors reefs in the Atlantic Ocean and the Gulf of Mexico—warned that the Caribbean appears to be facing a rapid widespread die-off of long-spined sea urchins. The die-off extends over one thousand miles, from the U.S. Virgin Islands to Jamaica, and possibly beyond.

“With their long black spines, these urchins are instantly recognizable as one of the most striking creatures in the Atlantic Ocean,” said Alex Petrosino, Biologist I at The Florida Aquarium. “What is less commonly known is these urchins provide a vital service, living out their lives, eagerly scouring over the reef surface and feeding on the fleshy algae that is fueled by pollution and can suffocate healthy coral reefs.”

Coral reefs around the world are dying off at an alarming rate. The Florida Aquarium (TFA) is playing a key role in researching and breeding dozens of coral species found along Florida’s Coral Reef, that stretches from the Dry Tortugas to north of Palm Beach, in hopes of restoring coral populations with diverse offspring that may be more durable to threats such as disease and climate change.

Simultaneously, TFA researchers are helping discover ways to rear volumes of urchins and other grazers that clean coral reefs so they can thrive.

Though urchins like these were once abundant in the Caribbean, the world nearly lost its entire long-spined sea urchin population in the 1980s due to an unknown disease that was likely linked to human-caused pollution or other stressors.

For several years, TFA researchers have been working collaboratively with the University of Florida (UF) developing ways to rear and foster urchins that help clean algae from reefs.

The adult urchins were transported to The Florida Aquarium’s Center for Conservation in Apollo Beach, Florida. In the laboratory, researchers at TFA and UF spawned these individuals and collected the fertilized eggs. Urchins are broadcast spawners and each adult can produce millions of eggs and sperm in each spawning event.

Around 400,000 fertilized eggs were then selected for grow-out and were placed into custom designed containers called kreisels, which have a circular flow of water that keeps the urchin larvae floating constantly in the water column while they develop.

After about 35 days, the urchins were able to settle out of the water column and were moved into larger tanks and raised for another six and a half months until they could be relocated to the ocean environment in the Florida Keys.

“We are in a race to help the world’s coral reefs, and this release of critically important algae grazers is a huge step forward,” said Keri O’Neil, MS, The Florida Aquarium’s Manager & Senior Scientist, Coral Conservation Program. “I am immensely proud of our team, and our partner institutions, who came together to find healthy and supportive methods to foster hundreds of urchins and release them into the wild.”

This project is considered the largest restocking effort known in the last 20 years and aims to learn more about how to successfully transport, outplant and monitor these sea urchins. These areas of the Florida Keys have lacked long-spined sea urchins in recent decades.

Colleagues at FWC designed a multifaceted research project, where each reef site included six different research plots, where experimental plots were enhanced with urchins, corals and/or artificial shelters. The FWC staff designed the experiment to see how the urchins will respond at the different treatment levels and will monitor these sites frequently over the next several months.

Importantly, UF gained state-approved health certification to release aquarium-raised animals back into the wild. Such work must be conducted by an approved veterinarian. This process is developed separately for each species released into the wild, based on their particular health concerns.

The health certification process ensures that only healthy animals are released and do not put wild populations at risk. The Florida Aquarium, University of Florida, and the Florida Fish and Wildlife Conservation Commission worked closely together to develop the health certification process for diadema sea urchins and tested the process for the first time with this release.

Dr. Roy Yanong from the University of Florida conducted the inspection along with Dr. Lindsey Waxman from The Florida Aquarium. This work lays the foundation for all future releases of aquarium-reared sea urchins into the wild.

Partners include The Florida Aquarium, University of Florida, and Florida Fish and Wildlife Conservation Commission. A peer-reviewed paper by Florida Aquarium researchers on the topic can be found here.

Photo of Diadema broodstock courtesy of The Florida Aquarium.

Read more about the breeding technique.