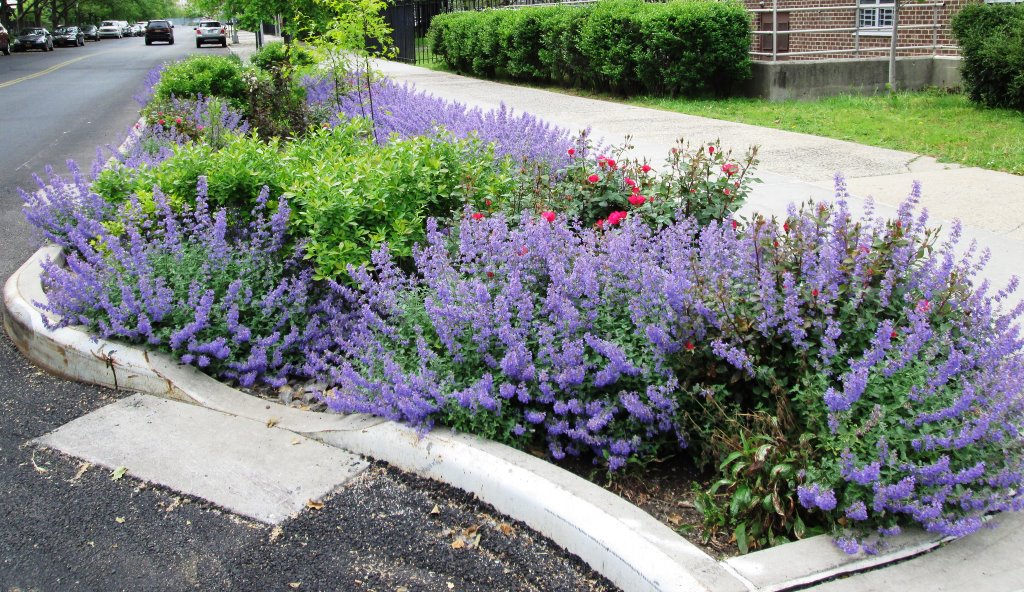 “New York City is a national leader in protecting the environment and at the forefront of this work is the largest and most aggressive green infrastructure program in the country,” said Sapienza. “New York Harbor is cleaner today than it has been since the Civil War and expanding our use of green infrastructure will help us continue to improve the health of all the city’s waterways.”

The city has already begun construction of more than 5,000 specially designed curbside rain gardens in Brooklyn, the Bronx and Queens, building upon the more than 4000 rain gardens that have already been built. 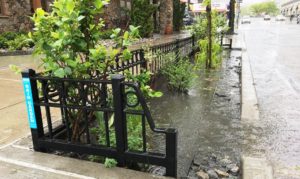 “Today we are experiencing the best water quality in over a hundred years and this has resulted in a resurgence of large marine life including dolphins and seals returning to the waters of Jamaica bay. One of the last great challenges is addressing rain event sewer overflows and these rain gardens will have a huge impact on such events. We commend Commissioner Sapienza and DEP for devising this innovative approach to addressing this critical issue,” he added.

This construction will bring a total of more than 9000 curbside rain gardens to New York City, helping to prevent flooding and reduce Combined Sewer Overflows into local waterways by more than 500 million gallons each year, thereby further improving the health of New York Harbor and its tributaries.

“We are deploying all of the resources at our disposal to tackle the challenge of global warming head-on,” said Mayor de Blasio. “We are doubling the size of the largest green infrastructure program in the country, creating green oases in our neighborhoods and protecting our waterways for all New Yorkers to enjoy.”

More than 70 percent of New York City’s land mass is covered by an impervious surface, which creates tremendous volumes of stormwater entering the sewer system during rainstorms. Curbside rain gardens help to soften the city’s landscape and allow the stormwater to be naturally absorbed into the ground, therefore reducing flooding that can impact roadways, homes and businesses. 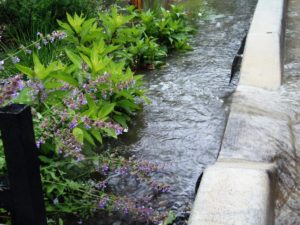 “DDC works with DEP on various types of infrastructure projects to improve harbor water quality, and integrates other types of innovative stormwater management tools into its public buildings projects,” said NYC Department of Design and Construction Commissioner Lorraine Grillo. “Each rain garden has the capacity to reduce stormwater runoff by thousands of gallons each time it rains, and is a cost-effective way to use natural drainage to help improve our environment.”

In addition, some of the neighborhoods getting these rain gardens currently have less than average street tree counts and higher than average rates of asthma among young people. The increased tree canopy and vegetation created through the addition of the rain gardens will help to improve air quality, provide shade during hot summer months, and beautify the neighborhoods.

“The expansion of the Green Infrastructure Program supports Mayor de Blasio’s vision for a sustainable and greener city,” said NYC Parks Commissioner Mitchell J. Silver, FAICP. “Rain gardens will introduce new green spaces to communities in Brooklyn, Queens and the Bronx. The storm water captured by these gardens will improve the health of our waterways and provide an appealing green amenity for surrounding areas.”

Rain gardens are built in city sidewalks and do not result in the loss of any parking spaces. They resemble standard street tree pits, except that they vary in size, have curb cuts that allow stormwater to enter and overflow if it becomes saturated, and have been engineered in a way that will allow them to manage up to 2,500 gallons each during a storm.

“The Trust for Public Land is proud to be working with DEP to create new parks and playgrounds that provide multiple benefits: absorbing stormwater, shady places to escape the summer heat, neighborhood gathering places for friends and families, and outdoor recreation areas that improve public health,” said Carter Strickland, New York State Director, The Trust for Public Land. “With dozens more green infrastructure sites in the pipeline, we look forward to working with DEP and the City to create a healthier and more climate resilient New York.”

In partnership with the Departments of Transportation and Parks and Recreation, DEP conducts an extensive site selection process that includes geotechnical investigations and surveys. The rain gardens are designed so that all the stormwater is absorbed in less than 48 hours and dedicated maintenance crews ensure that they are functioning properly, including removing any trash that may have accumulated and pruning the trees and plants.

“As DCP prepares for New York City’s next Comprehensive Waterfront Plan to envision a more active, accessible and resilient waterfront, we applaud DEP’s commitment to reducing combined sewer overflows. These rain gardens will result in a better waterfront experience for all,” said Brendan Pillar, Deputy Director of Waterfront and Open Space at the Department of City Planning.

The crews are active seven days a week, visit each rain garden approximately once a week and additional crews will continue to be added as the program expands.

“There’s no denying New York City has seen more and more rain every year, which puts us at greater risk of releasing of raw sewage from our Combined Sewer Outfalls,” said Council Member Costa Constantinides, Chair of the Committee on Environmental Protection. “Curbside rain gardens are a vital tool in combatting this excess stormwater. Our homes, roads, and waterways will be safer as these gardens absorb millions of gallons of stormwater, while keeping our neighborhoods beautiful.”

DEP has expanded its green infrastructure portfolio to include additional types of installations to be sited in even more locations along streets and sidewalks, such infiltration basins, which have a concrete or grass top depending on the existing sidewalk, rain gardens with pre-treatment devices, and porous pavements.

“New York City continues to invest in the critical green infrastructure that will transform our streets for the better, improve water and air quality, and keep New Yorkers safe,” said Deputy Mayor Laura Anglin. “These rain gardens will help mitigate the threat of heavy amounts of stormwater entering our sewer system, ultimately enhancing the health of our waterways across the city.”

“We applaud DEP for its significant investment in the expansion of the curbside rain garden program,” said Emily Nobel Maxwell, Cities Program Director for The Nature Conservancy in New York. “Rain gardens provide a host of benefits for people and nature; they soak up stormwater to improve the health of New York Harbor and local waterways, improve air quality, create habitat for butterflies and other pollinators, and serve as additional green space that helps our neighborhoods become more beautiful and climate resilient.”

This strategy includes constructing long-term coastal resiliency projects in all five boroughs, implementing a $106 million strategy to address extreme heat, partnering with utilities to harden critical infrastructure, increasing the resiliency of small businesses, and much more.

These efforts will build a New York City that is better prepared for the impacts of climate change while creating stronger and more equitable communities, better access to the waterfront, and revitalized natural ecosystems.

“The implementation of green infrastructure, such as the rain gardens being installed by DEP, have and will continue to improve the quality of the Bronx River,” said Maggie Greenfield, Executive Director of the Bronx River Alliance.

“Through decades of ecological restoration work, recreational programming, and advocacy by the Bronx River Alliance, our committed partners, and local leaders, the river has come a long way and we look forward to continued progress in reclaiming the river for its wildlife and Bronx communities,” she concluded.

All photos courtesy of NYC DEP.

Watch a Brooklyn bioswale in action in this 30-second video.