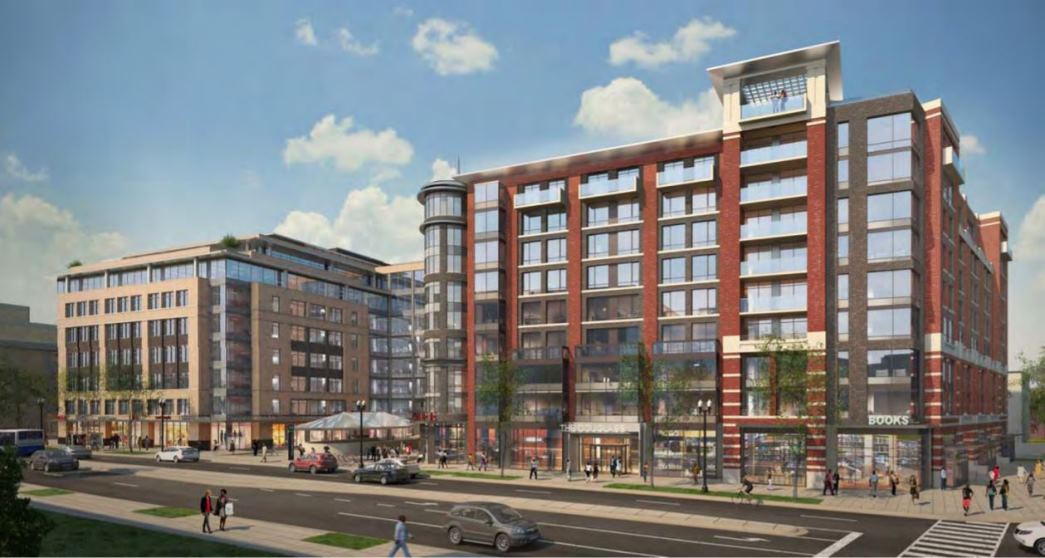 In one fell swoop, the Metro system gains both much-needed revenue and additional ridership, the District gains badly-needed affordable housing without an increase in car traffic, and a minority-owned real estate developer wins a profitable new project.

The land, which is just under an acre, is located at the southern entrance of the station. The lot will become part of a larger two-acre mixed-use redevelopment, with plans for a 240,000 square foot office building and 179 affordable housing units at 30-80 percent of area median income levels that are supported by the District’s Nonprofit Affordable Housing Developer Tax Relief program.

“Mayor Bowser has carefully led the transformation of St. Elizabeth’s East, so it reflects the interests and needs of the Congress Heights neighborhood,” said Deputy Mayor for Planning and Economic Development John Falcicchio. “This mixed-use development across Alabama Avenue SE will complement that work and ensure that both entrances to the Congress Heights Metro Station bring vibrancy to the neighborhood while also advancing DC’s goal of 36,000 new homes by 2025.”

Metro is a national leader among transit agencies in fostering private sector development on transit properties. To date, joint development projects at 27 stations have delivered more than 13 million square feet of office, residential, hotel and retail space. Metro’s transit-oriented developments contribute more than $42 million in annual tax revenue to local jurisdictions and have increased property values within a half mile by more than $160 billion.

“We are pleased to be a part of this project that generates new economic vitality to the community and affordable housing, as well as new ridership,” said General Manager/CEO Paul J. Wiedefeld. “The sale of this land will support reinvestment in our core business and provide more access to transit in the communities we serve.”

“Through this intricate transaction we take a giant step toward unlocking the benefits of this extremely well-located site through the office project we’ve planned with Trammell Crow Company and the affordable housing units that National Housing Trust will develop,” said Jerome Nichols, President of Standard Real Estate Investments.

Development of the land will support efforts by the District to enhance and stimulate growth at the former St. Elizabeth’s Hospital site, which is immediately adjacent to the Congress Heights Metro Station.

The sale delivers about $3.1 million to Metro to support its transit operations. Metro will retain full operational control of the station including the entrance, tunnel and related facilities. The main entrance to Congress Heights Station, bus loop and Kiss & Ride areas located across Alabama Avenue from the development site will not be affected by the project.

The Washington Metropolitan Area Transit (Metro) was created by an interstate compact in 1967 to plan, develop, build, finance, and operate a balanced regional transit system in the national capital area. Metro began building its rail system in 1969, acquired four regional bus systems in 1973, and began operating the first phase of Metrorail in 1976. Today, Metrorail serves 91 stations and has 117 miles of track. Metrobus serves the nation’s capital 24 hours a day, seven days a week with 1,500 buses.

Metrorail and Metrobus serve a population of approximately 4 million within a 1,500-square mile jurisdiction. Metro began its paratransit service, MetroAccess, in 1994; it provides about 2.3 million trips per year. Metro has a long—standing commitment to transit-oriented development. To date, developers in Metro’s joint development program have completed 42 buildings at 27 stations resulting in more than 13 million square feet of office space, residential units, retail space and hotel accommodations. Metro’s transit-oriented developments have contributed more than $42 million in annual tax revenue and increased property values by more than $160 billion within half a mile of jurisdictional sites.

NHT created NHT Communities (“NHTC”) in 1999 as the real estate development arm of NHT, building off our early technical assistance to other real estate owners. Since its creation, NHT Communities has participated in the preservation and improvement of over 10,000 affordable units in 13 states and the District of Columbia. NHTC maintains an ownership interest in nearly 4,000 units in 34 apartment communities including notably 1,000 units in Washington, DC.

Founded by Robert Jue and Jerome Nichols, Standard Real Estate Investments (Standard) is a minority-owned and controlled real estate private equity firm that manages capital on behalf of institutions and allocates joint venture equity to developers. The firm operates nationally across property sectors and risk profiles with an initial focus on the development of market rate attainable housing while also accelerating positive socio-environmental impact. The leadership team at Standard has invested in assets valued at $7 billion in total.