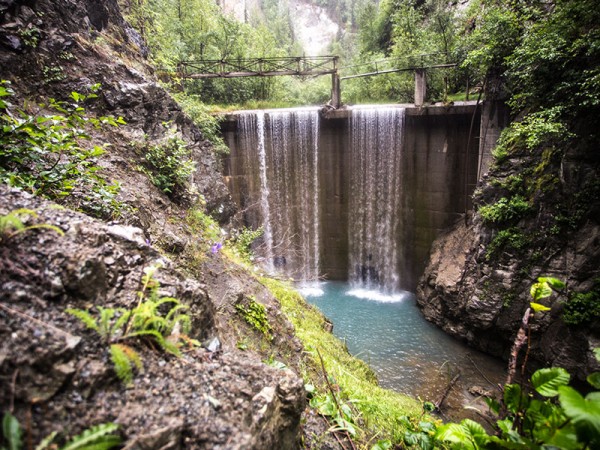 Near Anchorage, Alaska, the initial Eklutna Hydroelectric Dam, built in 1929, blocked the migration of spawning salmon, and was the first of two severe impacts that degraded the Eklutna River system and natural resource economy via hydroelectric projects.

Over the course of 2017 and 2018, the defunct lower Eklutna dam was successfully removed in the most ambitious river restoration project ever attempted in Alaska. The Conservation Fund, the Native Village of Eklutna and Eklutna Inc. completed that 5- year, $7.5 million effort to remove the Lower Eklutna River dam. 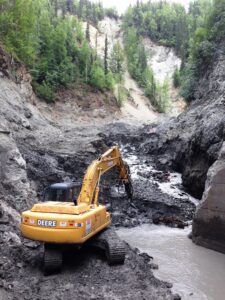 Known to its ancestral inhabitants as Idlughet, this area is among the traditional lands of the Eklutna Dena’ina who would overwinter along the shores of Eklutna Lake (Idlu Bena). The Eklutna River, Idlughentnu, and its wild salmon runs have long supported the Eklutna Dena’ina, however historic hydroelectric development on the river has greatly diminished the formerly flourishing salmon fisheries.

The Lower Eklutna River dam was built in 1929 as part of Alaska’s first hydroelectric project. Located in a dramatic 400-foot deep canyon, access to the dam site was a severe challenge during the construction and later demolition of the dam. In construction, a tram cart delivered concrete down the cliff face to the workers below. Workers toiled throughout an entire Alaskan winter to complete the dam in a year’s time.

The dam was 70 feet wide, 100 feet tall and 9 feet thick at its base. This structure pooled and diverted water through a half-mile tunnel to a generating station nearby. Power ran by wire to Anchorage until the early 1950s when it was decommissioned. 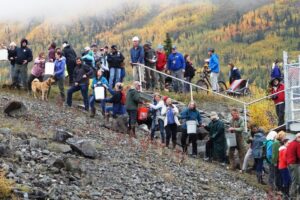 During a celebration of the dam removal, 200 people formed a bucket brigade to get water back into the river.

The lower Eklutna dam was ultimately abandoned after a second hydroelectric project was built at Eklutna Lake to provide additional electricity to the growing city of Anchorage. Completed in 1955, the currently operating Eklutna Hydroelectric Project diverts all of the water from Eklutna Lake and doesn’t release any water into the Eklutna River Repeated studies over several decades recommended the removal of the Lower Eklutna River dam as an essential first step in restoring the Eklutna River.

With removal of the lower dam, for the first time in nearly a century, salmon can access the 8 miles of habitat up to the Eklutna Lake. However the diversion dam at the out flow of Eklutna lakeblocks fish passage and prevents the release of water to support salmon and alklow their full and adequate use of the recently reconnected habitat.

The Eklutna HydroelectricP roject owners are legally obligated to make up for impacts to fish and wildlife, and stakeholders are engaged to help return salmon and water to the Eklutna River.Native Village of Eklutna, The Conservation Fund, Trout Unlimited and The Alaska Center formed the Eklutna River Restoration Coalition, together the coalition is working to bring back a healthy and fully functioning river by ensuring free passage for fish and enough water in the river to support five species of salmon.

All the water that would flow down the Eklutna River is currently diverted from its natural course. 90% of the water in the lake is pumped through the Eklutna Hydroelectric Project to create 3- 6% of electricity for the area. The remaining 10% of the water provides the majority of Anchorage’s drinking water.

It is believed that there is enough water to meet Anchorage’s drinking water needs, create electricity, and support all five species of wild salmon in the Eklutna River. That is what these partners are now working toward, in order to complete this historic ecological restoration effort.

All photos courtesy of The Conservation Fund.