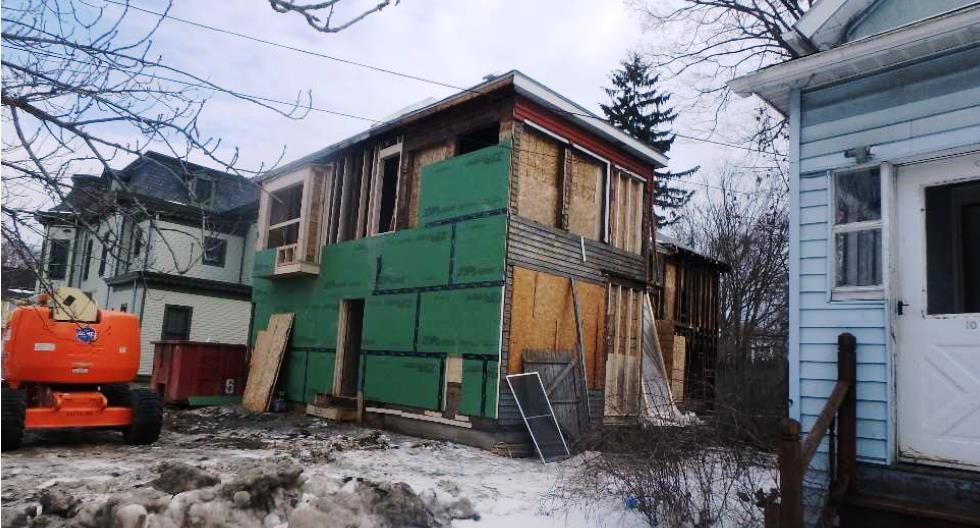 March 15, 2022 saw the start of construction on a $8.4 million affordable housing development in Binghamton, New York‘s North of Main neighborhood.

Known as the North of Main Revitalization, the scattered-site project will create 23 modern and energy-efficient affordable homes across seven separate locations north of Main Street.

Six existing historic buildings constructed in the late 19th and early 20th centuries will undergo substantial renovations and a new building with four apartments will be constructed on a vacant lot at 95 Walnut Street. The seven sites are within a four-block area of each other.

“The revitalization efforts in the North of Main area will replace blighted structures and vacant lots with modern, secure and comfortable homes in energy-efficient buildings. By working together with our local partners, we can continue to fund projects across the state that strengthen and rebuild our communities from the ground up,” Governor Kathy Hochul said.

Priority for four of the apartments will be given to veterans with physical disabilities.

NYSERDA President and CEO Doreen M. Harris said, “NYSERDA is pleased to support the North of Main Revitalization project, which showcases energy efficient features and materials that will ensure the comfort of Binghamton’s low-income residents and veterans who will call this neighborhood home. As this project and many others across the state break ground, we are seeing Governor Hochul’s clear commitment to making affordable housing accessible and healthy for all New Yorkers.”

Governor Hochul is building on this successful effort with a proposal for a new $25 billion, five-year Housing Plan that will create and preserve an additional 100,000 affordable homes in urban and rural areas across New York including 10,000 with support services.

All 23 apartments will be affordable to households earning at or below 60 percent of the Area Median Income. Four apartments will be designed to accommodate individuals with physical disabilities who will also have access to services provided by the Southern Tier Independence Center. Priority for these homes will be given to persons who have served in the armed forces of the United States.

Homes and Community Renewal Commissioner RuthAnne Visnauskas said, “Binghamton’s North of Main neighborhood is undergoing a transformation that will improve quality of life for both longtime residents and the next generation. In partnership with the First Ward Action Council, we are renovating buildings in disrepair across the neighborhood, creating 23 new high-quality homes on vacant lots which will expand access to affordable housing opportunities for more New Yorkers, including for those who have served our nation.”

Each building will meet green design standards and will include energy-efficient features such as Energy Star appliances, Energy Star lighting and low-VOC building materials. The six existing buildings will be weatherized to improve heating and cooling efficiency.

Executive Director of First Ward Action Council Jerry M. Willard said, “We are very pleased to be celebrating construction today eliminating blight and rebuilding housing block by block in the North of Main neighborhood with the crucial support of NYS Homes and Community Renewal, the City of Binghamton, development team members and friends and neighbors.”

State Senator Fred Akshar said, “Safe, stable and affordable housing is an essential step in helping those in need in our community get back onto the path to success. Our veterans have sacrificed so much, and the least we can do as a grateful community is to help meet their most basic needs when they return home.”

In 2020, construction was completed on the Crandall-North Street Revitalization project that created 37 affordable homes and commercial space at scattered locations on Crandell Street and North Street. The developer for both projects is the First Ward Action Council.

Assemblywoman Donna Lupardo said, “I’d like to thank NYS Homes & Community Renewal, the First Ward Action Council, and the City of Binghamton for their ongoing effort to revitalize the North of Main neighborhood. As an advocate at the state level for affordable housing, I am delighted to see this level of state and local investment in the City of Binghamton’s housing needs. The focus on disabled veterans for several of the units is especially appreciated.”

State financing for North of Main includes Federal and State Low-Income Housing Tax Credits that will generate $5.4 million in equity and $2.4 million in subsidy from New York State Homes and Community Renewal.

County Executive Jason Garnar said, “I’m pleased to see this project that creates 23 new units of affordable housing get underway and am especially appreciative that four units will be designated for disabled veterans. This development complements the work we’re doing at the County level to increase the availability of affordable housing. Thank you to NYS HCR, First Ward Action Council, and my partners in State and local government for their support of this project.”

The New York Weatherization Assistance Program awarded $76,000 to the project. The New York State Energy Research and Development Authority will provide $23,000 in support. The City of Binghamton will provide $355,000.

Mayor Jared M. Kraham said, “This project furthers the revitalization of Binghamton’s North of Main neighborhood and adds to the growing number of new affordable housing units in the City. Few neighborhoods in the Southern Tier have seen as much investment or transformation in recent years as NoMa, which has become a statewide model for neighborhood revitalization. The City is proud to partner with the First Ward Action Council and New York State to continue investing in our neighborhoods, reducing blight and creating much-needed quality, affordable housing for families in Binghamton.”

This year, the State is poised to reach the goal of its current Housing Plan of creating and preserving 100,000 affordable homes and 6,000 with support services.