When Brazilian photographer Sebastiano Salgado expected to take refuge in the tropical forest home he knew and loved after returning from covering the horrific Rwandan genocide in 1994, what he found instead was a different sort of horror.

The trees were gone. A barren wasteland was all that remained where the forest once stood.

Seeing the destruction of his home environment spurred the Minas Gerais native, along with his wife, Lélia, to replant some 1,502 acres of forest over the next 20 years, restoring his home to its former glory. 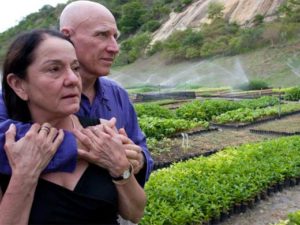 “The land was as sick as I was—everything was destroyed,” Salgado told The Guardian in 2015.

“Only about 0.5 percent of the land was covered in trees. Then my wife had a fabulous idea to replant this forest. And when we began to do that, then all the insects and birds and fish returned and, thanks to this increase of the trees I, too, was reborn—this was the most important moment,” he added.

The couple created the Instituto Terra, and hired some 24-plus workers to help replant the forest tree by tree. Many volunteers joined in the efforts.

Over the course of two decades, they completely transformed the area. The results are breathtaking and surprising.

Now, the replanted forest is anything but silent. Among the flora and fauna that have repopulated the area, there are 172 species of birds, 33 mammal species, 293 species of plants, 15 reptile species, and 15 amphibian species. The thriving, biodiversity-rich zone was recently declared a Private Natural Heritage Reserve.

Here’s the Instituto Terra story, in their own words:

Thanks to the work of the Instituto Terra—now a Private Natural Heritage Reserve (PNHR)—some 17,000 acres of deforested and badly eroded land in a broad stretch of the Valley of the River Doce have undergone a remarkable metamorphosis.

More than four million seedlings of the multiple species native to Brazil’s Atlantic Forest have been raised in the institute’s own nursery. Those plants are now reforesting what was long known as the Salgado family’s Fazenda Bulcão, or Bulcão Farm, and are also contributing to similar environmental restoration programs in surrounding areas.

Once in a state of advanced natural degradation, this former cattle ranch has been transformed into a fertile woodland, alive with flora and fauna which for millenniums had made the Atlantic Forest one of the world’s most important repositories of natural species. The experience shows that, with the return of vegetation, water again flows from natural springs and Brazilian animal species at risk of extinction have again found a safe refuge. 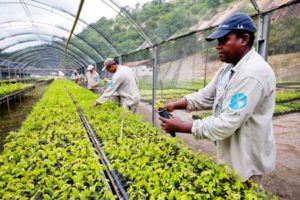 Founded in April 1998, the Instituto Terra is a community non-profit non-governmental organization that operates in the whole territory of the valley of the River Doce between the states of Minas Gerais and Espírito Santo. It is a region that for centuries has suffered from rampant deforestation and uncontrolled exploitation of natural resources, notably iron ore. The resulting droughts and severe land erosion have also had a devastating impact on the living conditions of the region’s rural population.

The institute has defined its objectives as restoration of the ecosystem, production of Atlantic Forest seedlings, environmental outreach programs, environmental education and applied scientific research.

The Instituto Terra manages the 1,754-acre Bulcão Farm, 1,502 acres of which have been declared a Private Natural Heritage Reserve. It is the first such PNHR in a ravaged area of the Atlantic Forest. Inspired by Bulcão Farm’s success as a pilot project, in 2004 the state of Minas Gerais established the category of the Private Reserve for Environmental Restoration (PRER) to encourage other private property owners to follow suit.

With the reforestation of the Bulcão Farm, where the first planting took place in December 1999, the Instituto Terra is nearing completion of recovery of a single uninterrupted section of the Atlantic Forest. This is an unprecedented achievement in modern Brazil.

All images courtesy of Instituto Terra.