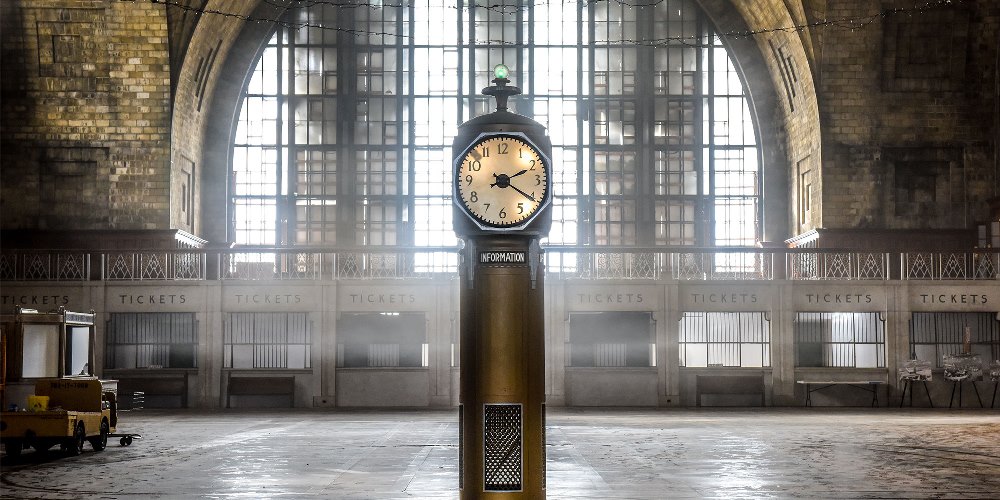 On August 9, 2021 in Buffalo, New York, the Central Terminal Restoration Corporation (CTRC) released their Master Plan for the long-awaited reuse of the iconic Buffalo Central Terminal. It claims that some $100 million is needed to clean and stabilize the site, and another $200 million will be needed to fully redevelop the site.

“Whether it is $10 or $10 million dollars, this is worth it. It’s worth every penny of it,” says Assembly Majority Leader Crystal Peoples-Stokes. “And I think we should fight tooth and nail to make sure it happens.” 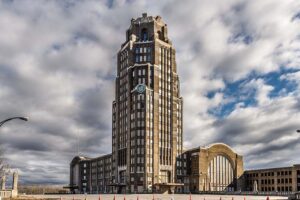 This master plan, developed over 12 months, redefines the Buffalo Central Terminal’s future as a vibrant local and regional destination supporting economic and social opportunities to the Broadway-Fillmore neighborhood, Buffalo’s East Side and the City of Buffalo and Western New York. 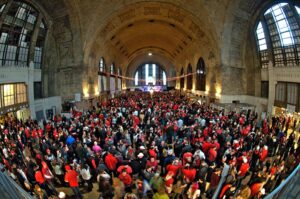 The development of the Terminal plan has been steeped in listening and understanding, with three well-attended public meetings with hundreds of community stakeholders participating, five Community Advisory Group meetings, focus groups, and web-based activities; all designed to gather feedback and ideas from those who are familiar with the building and the neighborhood. There have also been interviews and analysis with developers, potential users and industry leaders, precedent studies, and an assessment and analysis of the property conditions.

It is the most in-depth study ever completed on the Central Terminal for the future reuse of this historic building and property. This Master Plan positions the Terminal as an economic, social and cultural hub – accommodating large-scale events, local businesses and institutions, as well as cultural and community functions and programming.

“The adaptive reuse and redevelopment of the Buffalo Central Terminal presents a once-in-a-lifetime opportunity to build the future envisioned by the community where the rising tide of investment, innovation and opportunity is realized by the very people who have made the community what it is today,” said Dan Kinkead, AIA at SmithGroup.

“From the dedicated stewardship of long-time residents, to the impact of young entrepreneurs and dynamic businesses, the larger arc of this community in transition means the Buffalo Central Terminal Master Plan offers an opportunity to outline a shared strategy for an integrated and collective recovery,” he added. 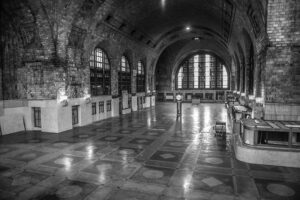 The Plan calls for a long-term approach that is pragmatic, yet still able to respond to strategic opportunities over time, beginning with a focus to create a shared Civic Commons that serves as a year-round venue for events and activities centered around the Concourse — and a public plaza with adjacent grounds.

This initial focus on a revived, shared Civic Commons will position the Terminal as a premier destination for diverse public events and programs that leverage the grand spaces of the passenger concourse, waiting room and restaurant, as well as the plaza and great lawn.

These core spaces will create a nexus for public life, connection and activation where cultural, educational and commercial activity can thrive. Companion to the Civic Commons will be the creation of a Great Lawn as a welcoming green space for year-round public use, including recreational activities and events of various sizes. A signature feature will be a grand staircase that connects the lawn to the plaza. Landscape improvements will include trees, pedestrian pathways, and power access to support events, creating an outdoor destination that is enjoyable and functional for visitors.

Improved circulation and access with a welcoming street entry, seamless parking, pedestrian access, and an interior circulation system ready the Terminal for easy navigation to and within the building and grounds. Visitors and tenants will have access to user-friendly parking and non-motorized pedestrian and bicycle access. The current approach drive will have a plaza level porte-cochere drop-off at the tower entry and new direct vehicular access to underground parking, with the addition of elevators to bring visitors and tenants up to the plaza and into the Terminal.

Green space and returning window openings will connect the outside of the parking garage to the neighborhood. To ensure an accessible, engaging and cohesive overall campus, the grounds will be interconnected with pedestrian and other non-motorized circulation paths that link with paths existing today in Broadway-Fillmore.

“When this building is finally redeveloped and brought back to its useful life, we will all be celebrating not only in Broadway-Fillmore, but across the entire City of Buffalo,” Mayor Byron Brown said.

These early phases will support a range of complementary creative, entrepreneurial and civic enterprises such as:

Use of sustainable systems and practices and respect for the historic identity of the buildings and grounds will be woven through all aspects of the project, including a geothermal field below the grounds to support cooling in the summer, and heating in the winter by utilizing the ambient temperature of the earth, and south-facing photovoltaic panels.

“From its opening almost a century ago, the sprawling Buffalo Central Terminal has wowed its users with civic grandeur, its magnificent Passenger Concourse and soaring deco tower,” said James Lima at James Lima Planning + Development.

“Its past economic, social and cultural value was mostly as a gateway to travel and discovery somewhere else. Our team’s contribution to the Terminal’s next chapter capitalizes fully on this ‘Architecture of Awe’. Grounded in market reality but aspirational in program and plan, the Terminal will be a place where everyone feels welcome to come again and again to connect, discover, linger and celebrate. It will be both a destination and a beloved and integral part of the local community,” he continued.

The Central Terminal is currently executing a $5+ million Capital Project to ready an event space, focusing on the 8,000-square-foot former restaurant area adjacent to the main Concourse. In order to achieve a tempered event space, roof replacement and associated asbestos abatement and electric upgrades were required in order to stem the significant water infiltration.

As this Capital Project nears completion, efforts are underway to secure funding to fuel the next steps in the Terminal’s dramatic transformation.

“The future of the Terminal is bright, but the time is now and there is much work to be done,” said Pellegrino-Faix.

“The building has been lovingly cared for by volunteers for more than 20 years, but despite this effort it is in a significantly deteriorated state, with safety and security issues. Information from the Capital Project and the Master Plan Property Conditions Assessment makes it clear that we need additional support to continue the momentum: $100 million will make this iconic building safe and secure, and ready for the dynamic development and exciting reuse,” she concluded.