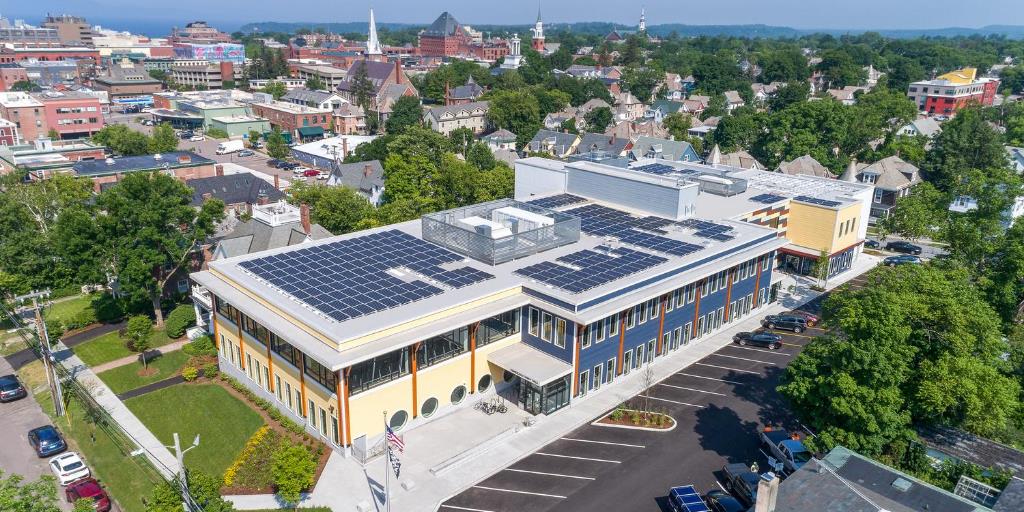 On August 20, 2020, Encore Renewable Energy and the Greater Burlington YMCA announced the completion of a new rooftop solar array in downtown Burlington, Vermont.

Encore is a Burlington-based leader in commercial renewable energy with a proven track record in solar development from concept to completion. Founded in 2007 as Encore Redevelopment, their team specializes in the design, development, financing, permitting, and construction of solar and energy storage projects on landfills, brownfields, rooftops and carports. As a values-led company, Encore is committed to revitalizing communities and creating a cleaner, brighter future for all.

Encore worked extensively with the YMCA’s management team and construction contractors to integrate the solar project into the new facility that was constructed on a redeveloped property, which had been vacant for a decade.

The property had previously hosted the Ethan Allen Club, which ceased operations in December 2010 after 115 years. The club had been started by volunteer firefighters in the city of Burlington. For most the club’s existence, it was located at 298 College Street. An old home that housed the club for many years burned in 1971. A new building opened in 1972, the structure that was on the lot when the Y purchased the property in 2015.

In 2008, the Ethan Allen Club put the property on the market. The Greater Burlington YMCA was interested at the time, but Champlain College had the winning bid on the property ($2,627,000). The College was looking to the lot as a location upon which it could build student housing. That plan was met with resistance in the residential neighborhood and ultimately scrapped.

In the time that Champlain College owned the property, they used it briefly for a temporary art gallery, made it available for use as the temporary home of a YMCA early childhood when space in a nearby church was suddenly unavailable in the wake of a 2013 fire, and in its final year of ownership (2015), Champlain College joined forces with the City of Burlington and others to use the space over the winter for a temporary homeless shelter.

After many years of searching for a location for a new Y, the organization now had a home . . . well, at least a parcel of land. The Greater Burlington YMCA, which since its founding had been in downtown Burlington had been intent upon remaining downtown and it now had a location. The capital campaign to raise funds to construct the new Y was named the “Staying in the Heart” campaign.

“From the beginning, the quest to build a new Y has always been about the benefit to the community,” said Kyle Dodson, President & CEO of the Greater Burlington YMCA.

“Although not our core business, clean energy is important to the health of Burlington, and it felt like a squandered opportunity to not take advantage of our large, flat new roof. With all of the design and financial challenges of the building itself, we were struggling with attending to a solar project. We are deeply grateful to Encore for solving the funding and logistical issues and making this project work!” he added.

The Y had significant fundraising to do to bring this project to completion, but in a desire to make use of the existing structure, in the summer of 2016 it opened the space for limited use with two group exercise studios, one devoted for cycling classes and the other largely for yoga. This helped relieve pressure on the aging Y home at 266 College Street and helped ensure the structure did not lay fallow until construction could start on the Y. The Y used the studio space at 298 College Street, which it dubbed “The Y Annex” until August of 2018.

In September 2018, site work began for the construction of the new Greater Burlington YMCA. The Y received the conditional certificate of occupancy from the City of Burlington in December 2019 and opened its doors to members on January 1, 2020, with a formal grand opening held January 2, 2020.

“Partnering with the Burlington YMCA on this project offers value alignment on multiple fronts,” said Sarah Valdovinos, Founder of Golden Sail, the project’s main investor. “Providing the funding solution for a project like this goes above and beyond the financial value that the project offers, given the Y’s mission, we’re achieving various ESG metrics by supporting the sustainable development of Burlington in addition to participating in healing the climate.”

The project will provide approximately 25% of the building’s energy requirements with clean solar power. In addition to the economic benefits in the form of energy savings, the project also supports the YMCA’s commitment to social responsibility by offsetting the carbon equivalent of the fuel consumption associated with 35 passenger cars annually or nearly 17,500 gallons of gasoline consumption.

“The Encore team worked in close collaboration with the Greater Burlington YMCA to deliver this renewable energy project on a challenging site and under tight construction timelines. It’s always exciting to continue to support our home city’s ambitious climate and clean energy goals. This project is another great example of the triple bottom line, win-win-win nature of clean energy projects,” said Chad Farrell, CEO and Founder of Encore Renewable Energy.

The new rooftop solar array will provide the YMCA cost savings on the facility’s electric bills and the opportunity to acquire the asset at a future date, while also complementing their sustainability goals to be energy efficient. It also furthers Burlington’s position as a national leader in solar installed per capita and supports the city’s ambitious clean energy goals.