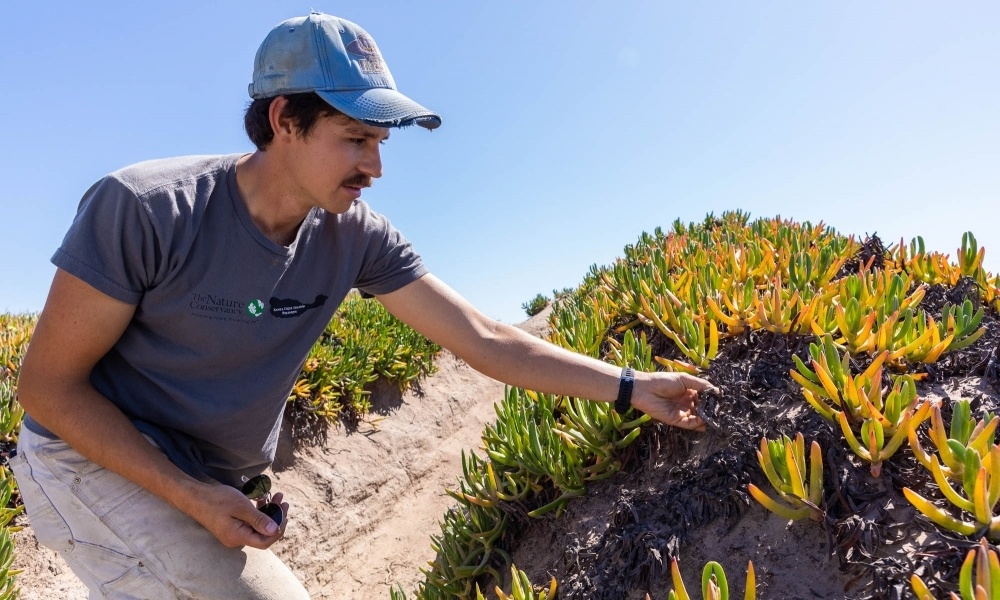 Perched upon the Pacific Coast in sunny Goleta, California, UC Santa Barbara has an enviable campus that provides a unique suite of opportunities to the community, including dorm-side surfing, on-site marine research and scenic views of the Santa Barbara Channel. 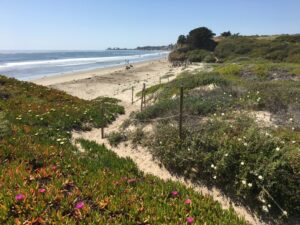 This was not always the case. The seaside location was originally home to thousands of Chumash Indians and later served as agricultural land and a World War II Marine air base.

The military presence left an especially pronounced impact on Campus Point — the headland adjacent to the campus beach — which still bears asphalt and concrete foundations as well as carpets of invasive ice plant from that time.

The university’s Cheadle Center for Biodiversity and Ecological Restoration (CCBER) plans to restore the bluff’s native flora — and has just received funding to do so. A grant from the state will support the removal of the asphalt pad and the replacement of invasive plants with native flora.

CCBER will also work with the Barbareño Band of Chumash Indians to ensure the integrity of the site’s cultural resources, and collaborate on signage that highlights the location’s ecological, geological and cultural heritage. Work is set to begin in summer 2022, with excavation likely to commence by autumn. 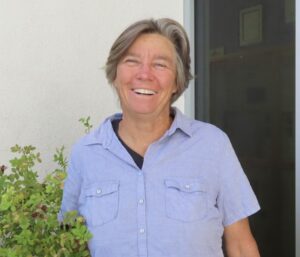 “Campus Point has so much potential,” said project lead Lisa Stratton, CCBER’s director of ecosystem management. “It’s this iconic headland that sort of defines UCSB, but it still bears the imprint of degradation from the military era.”

Restoration efforts first began in 2012 with the construction of a boardwalk stairway using money from UCSB, the Coastal Fund and California Coastal Conservancy. Since then, CCBER has been working on reclaiming the area from invasive ice plant.

However, the task of removing the asphalt pad and restoring the rest of the nearly 7-acre bluff required a beefier grant.

The California Natural Resources Agency delivered with an award of $491,000, which will cover four-years of work to ensure the area is stabilized and fully restored. 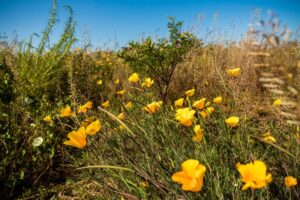 The money comes from the California Department of Transportation, and is part of an effort to mitigate the effects of the new Goleta Beach Bridge, which impacted habitat around the Goleta Slough.

The university plans to restore the mixture of habitat types that the site once featured, including beach dune, coastal scrub and woodland. Ice plant has overgrown the bluff since it was introduced in the 1950s.

The monoculture smothers native plants and provides little habitat or food to the region’s wildlife. CCBER staff use tarps to starve the plants of sunlight and convert them into fertile mulch for the local shrubs that now grace the site’s eastern extent.

The team will remove some of the fallen trees and add native fruiting trees like toyon, elderberry and lemonade berry to support the small woodland on the lagoon side of the headland. Acorns planted in 2005 have already begun to restore the canopy in that area.

It’s one thing to try and bring back native plants — which promote the health of an ecosystem — but the team also plans to take the added step of determining the unique and historical character of Campus Point’s ecology. 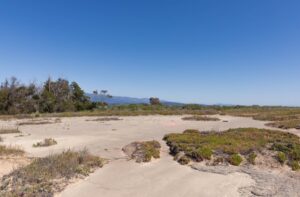 “Coastal sage scrub is a broad plant community, but I’d say there’s a specific flavor to it in the varying regions of California, such as coastal Goleta,” said Chris Berry, CCBER’s Campus Lagoon steward.

Stratton and Berry are particularly excited by the center’s ongoing success reintroducing increasingly rare native wildflowers and annuals. These plants are incredibly important for supporting native bees, butterflies and other components of the food web.

CCBER has seen a lot of success with their controlled burns on Lagoon Island. A survey of the burn plot in 2020 found 84% native plant cover comprising 33 different species.

In contrast, invasive plants accounted for barely 1% of the burned area, according to Berry. While there is no plan to carry out controlled burns at Campus Point, CCBER will expand burns on Lagoon Island in August.

The team will invite local community members to help in the restoration. School groups, student workers and interns will all contribute to the project, as will members of the Barbareño Chumash community. 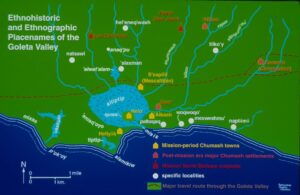 “Part of our role is to diligently watch the work as it happens, and to keep an eye out for any significant resources and make sure that they are handled with the utmost dignity and respect,” said Eleanor Fishburn, chairwoman of the Barbareǹo Band of Chumash Indians.

The whole area around Goleta Slough is environmentally and culturally sensitive, with a long history of Chumash presence.

Campus Point was undoubtedly a familiar location to past Chumash people. Historic notes and maps preserve the site’s Chumash name, Sismikiw. The nearby Goleta Slough (Sitiptip in Chumash) was once a sizable shallow bay that hosted many villages. It was among the most densely populated areas in all of pre-contact California: a veritable metropolis.

Natural processes and human activity dramatically reshaped the area around campus over the past 200 years, altering the ecology and cultural record. Large debris flows in November 1861 turned the bay into more of a shallow lagoon.

Then in WWII, government airfield construction filled in most of the Goleta Slough, leaving the saltmarsh we see today. This process destroyed half of Mescaltitlan Island (or Helo’), the historical site of a major Chumash village.

While Fishburn laments the damage done long ago, she sets her sights on the future. “We cannot erase the past,” she said. 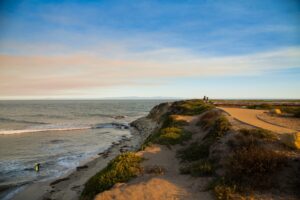 Her sentiment was that our actions going forward are more impactful. She appreciates CCBER’s commitment to restoration and hopes the Campus Point project can return the headland to its original condition and prevent further ecological and cultural impacts.

“The site is really accessible to the campus community,” Stratton said, “and the project will restore this amazing headland for generations to appreciate and enjoy.”

Of course, learning from the past is an important part of building a better future. In this light, CCBER plans to install interpretive signs as part of the restoration effort. The placards will inform visitors about the site’s flora and fauna, geological processes and cultural heritage. The goal is to foster a connection with the ecology, culture and history of the location.

Unless otherwise credited, all images are courtesy of CCBER.

This article by Harrison Tasoff originally appeared on the UCSB website. Reprinted here by permission.