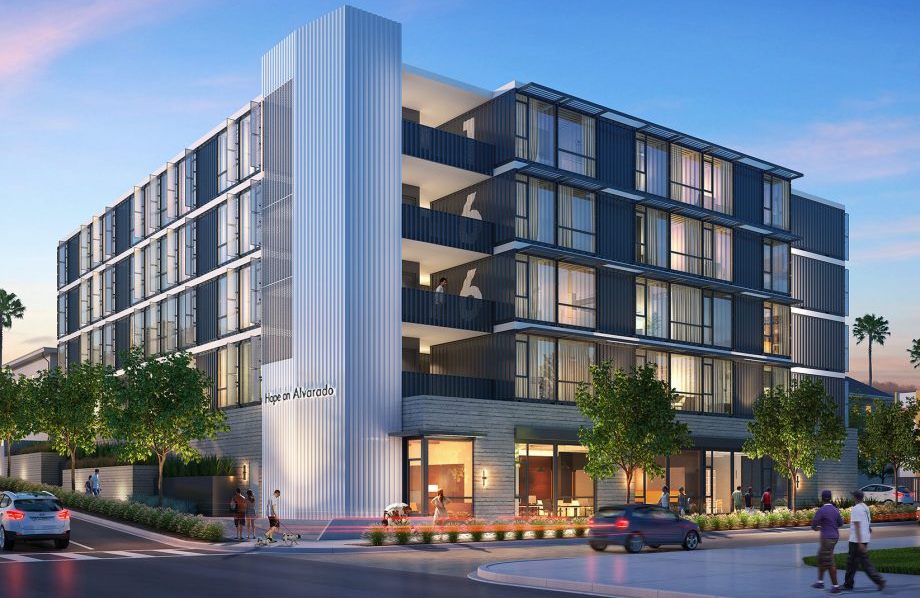 In Los Angeles, California, KTGY has announced groundbreakings for a series of pioneering modular redevelopment projects with the potential to transform housing for the chronically homeless.

The system leverages the dimensions and material of shipping containers for efficient transporting and construction. The set of three buildings, with more to come, may be the largest modular housing series in Los Angeles.

With wrap-around supportive services for homeless individuals, the development places multiple steel sections together, with interiors pre-installed. ULI Los Angeles recently offered a case-study walk-through of Hope on Alvarado, with the team demonstrating its efficiencies. Formerly homeless individuals are now living in the attractive apartments. 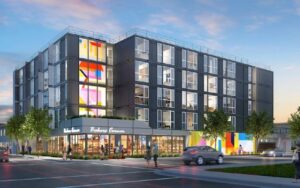 Hope on Hyde Park – at 6501 Crenshaw Boulevard, at the intersection with Hyde Park and near the Crenshaw Line light rail – also uses steel modules to create modern and affordable supportive housing. The five-story, 96-unit Hope on Hyde Park offers studios and one-bedroom apartments on a 0.49-acre site.

A central courtyard brings privacy, safety and a deepened sense of community. Floor-to-ceiling glazing along the amenity space engages the community and brings movement to the street. Parking spaces are available for social-services staff, while each resident has a bike-storage space.

This building will help reinforce a pedestrian-friendly character along the Crenshaw corridor while creating a quiet home for those who have previously experienced homelessness. Hope on Hyde Park is scheduled to open Q2 2022. 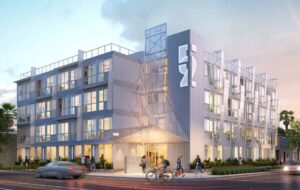 Hope on Broadway rendering by KTGY.

Hope on Broadway – at 52nd and South Broadway in South Los Angeles – will offer 49 residential units on a quarter-acre lot in a transit-oriented community (TOC). As with the other Hope Street Developments, the ground-floor podium will house supporting services, and resident amenities include an interior courtyard and roof deck.

Large expanses of glass allow sunlight into the residential units, expanding the spaces and providing visual connectivity to the city. Expected completion is Q2 2022. 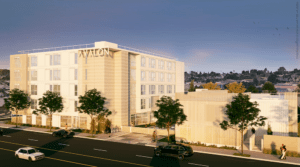 Hope on Avalon rendering by KTGY.

A fourth Hope Street Development, Hope on Avalon in Los Angeles County, across from Magic Johnson Park, is now in development.

Both Hope on Broadway and Hope on Hyde Park have received City of Los Angeles Measure HHH funding, created to build approximately 10,000 units of supportive housing.

All four of the projects are bringing new life to derelict sites.

All of the sites had vacant buildings of no architectural or historic value, making their regeneration into affordable housing a truly revitalizing transformation:

“Site work and foundations are done on site, while the modules – including customized interior finishes and fittings – are manufactured off-site and craned into place. As the housing crisis continues, these projects are efficiently delivering new residences and services to people very much in need,” he added.

1. Modules are transported by truck to the site, crane-lifted and stacked into a single building.

2. Each apartment is composed of several modules, modified specifically for the project.

3. Floor-to-ceiling windows are completed off-site, as are interior fixtures and finishes such as drywall, tiling, bathrooms.

The design is centered on a central courtyard, providing privacy and encouraging safety and a sense of community. Floor-to-ceiling glazing distinguishes the support-services office space on the street-level. The developments employ LEED standards.