There’s an old adage in real estate: Location, location, location. And Connecticut College’s, with its sweeping views of Long Island Sound, 750-acre Arboretum and position along the mighty Thames River, was once dubbed “the finest college site in the world.”

The college’s riverfront location in New London is even reflected in the motto that appears on its seal: Tanquam lignum quod plantatum est secus decursus aquarum, a Latin phrase that translates to: “Like a tree planted by rivers of water (that bringeth forth its fruit in its season.)”

Now, that riverfront is getting a huge makeover, after having been originally designed in 1911. 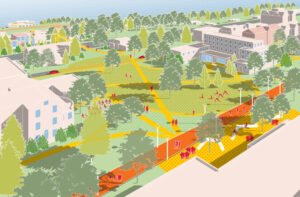 “Our waterfront is a tremendous asset, but we haven’t been taking full advantage of it,” said Dean of the College Victor Arcelus. “This project is changing the relationship between the campus and the waterfront in a way that will benefit the entire community.”

The Waterfront Revitalization Project, a goal of both the College’s strategic plan and Conn’s Action Plan for Competitive Success, will further redevelop the College’s terraced waterfront property and provide new spaces and facilities for sailing, rowing and recreation, as well as marine science.

With part of the first phase complete, the landscape is already dramatically changed. Previously, the view of the river from the athletic complex was almost completely blocked by invasive and common tree species that are not part of the College’s Arboretum collection. A plan was devised to remove them In consultation with Conn’s Arboretum team of experts.

“We thought the tree clearing would take years and be a great expense,” Arcelus said. “But when COVID-19 hit in March 2020 and students vacated the campus, our grounds team was able to focus on this project and clear the hillside down to the water.”

With a leadership gift from champion rower and Athletics Hall of Fame member Jessica Archibald ’95, the College is now working to complete the first phase, which includes a new floating dock system for sailing, as well as a new roadway, sidewalks and lights. That work is expected to be complete by spring of 2022.

Also planned in the near future is an addition to the Athletic Center that will capitalize on the expansive views of the athletic property out to the Thames River. That addition will include a new space for strength and conditioning, sports medicine, a new squash center, reception and event spaces, offices for coaches, and stadium seating for 500 overlooking Silfen Field.

Future phases of the Waterfront Revitalization Project will include a new waterfront center to support sailing, rowing, marine science and outdoor recreation; a second turf field; and an event plaza.

“The goal is to introduce our students to this wonderful natural resource and open up this beautiful piece of property to the entire community for kayaking, stand-up paddle boarding, sailing, and other recreational, educational and research opportunities,” said Director of Athletics and Chair of Physical Education Mo White.

“The riverfront is now a wonderful, safe and inviting place for our students, faculty and staff to learn to sail, go for a walk, or just sit and unwind,” she continuerd.

White added that the project strategically invests in what is already one of the best sailing and rowing venues on the East Coast.

“To be able to sail and row directly from campus is very rare,” she said. “Our nationally ranked sailing program is a crown jewel of Conn athletics, and the Thames has a wonderful history of rowing that is rich in tradition. It’s great to focus on and invest in these two varsity programs.”

The Thames also serves as a living laboratory, and the expanded access will allow for more research and sustainability projects. Already, George & Carol Milne Assistant Professor of Biology Maria Rosa has received a $10,000 grant from Kenny Chesney’s No Shoes Reefs to partner with The Reef Ball Foundation to pilot a reef ball program in the Thames near the new docks.

Rosa’s students will help build and place the reef balls, which are artificial reefs that serve as restored habitat for local fish, help rebuild shoreline by minimizing erosion and promoting the growth of plants, and create a protective barrier in the water that minimizes wave action that will protect the docks.

“The reef balls themselves are a living classroom,” said Rosa. “They will be built and monitored by students, and will provide a site for snorkeling and diving and other independent investigations for years to come.”

She added, “From a facilities standpoint, the structures serve to decrease wave action which will protect any docks built in the area. They work like living reefs, creating a buffer to wave activity, including boat wake action which can cause millions of dollars in damage to docks and sailing boats once they are in the water.”

Arcelus said he is thrilled to see the new, open waterfront—long envisioned as part of a campus master plan—come to fruition.

“There was a beautiful moment this semester when I was at the Athletic Center and I could see the rowers and the sailors on the water, the track and field athletes throwing on the middle terrace, the runners running on the track, and the lacrosse players playing on the turf field—all at the same time,” he said. “There was this great sense of energy and connection.”