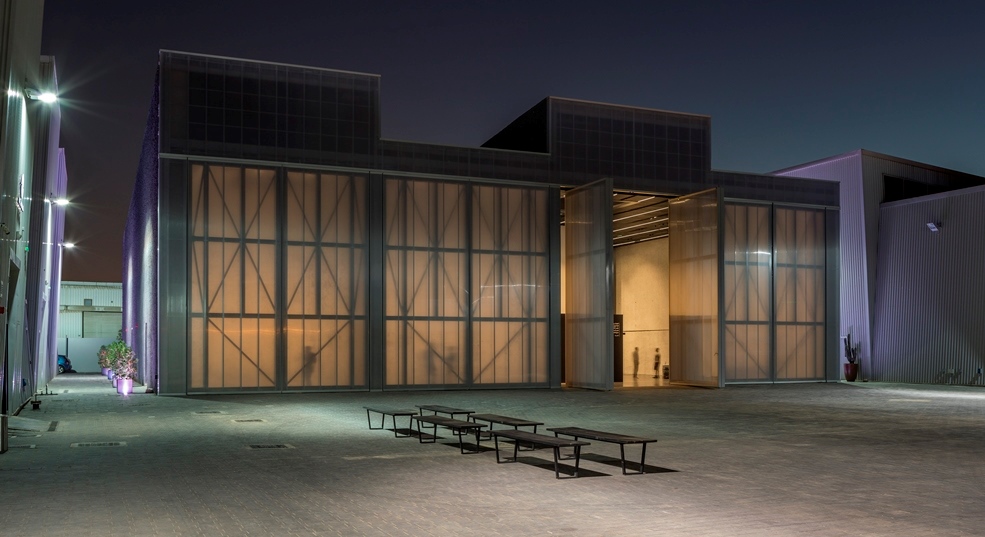 In the United Arab Emirates, Concrete is the name of a multi-functional cultural space in an abandoned warehouse on Alserkal Avenue in Dubai. It was designed by Rotterdam-based architectural firm OMA, and is a rare example of adaptive reuse in a city known almost exclusively for creating shiny new objects. 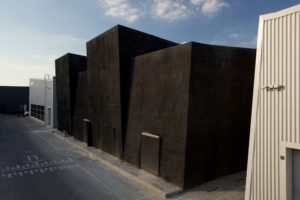 Located in Dubai’s Al Qouz industrial area, Alserkal Avenue was founded in 2007 with the aim of promoting cultural initiatives in the region. Since then, it has become Dubai’s most important art hub with twenty-five galleries and art spaces. Concrete addresses the district’s growing need for a centrally located public space which can host a diverse program.

Rem Koolhaas, OMA’s founding partner, says “Dubai is one of the cities that has had a deep impact on our work, and I am very happy that this particular building is our first effort here. In Concrete, we are not introducing a new shape but instead were able to infiltrate an existing building with an arts institution. This building is totally produced in Dubai; it is not a foreign ideal, and that I think is significant.”

The 1,250 square meter former warehouse provides a multi-purpose space to accommodate public events, exhibitions, performances and lectures, and continues OMA’s work in the preservation and repurposing of existing buildings.

Allowing multiple configurations, the industrial-scale space has 8 meter-high ceilings, pivoting and sliding walls, and a translucent façade with full-height doors which can seamlessly connect Concrete’s interior with the complex’s large, central courtyard. 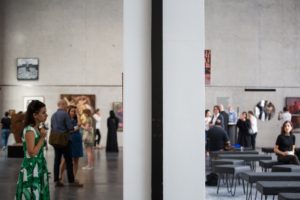 Abdelmonem Bin Eisa Alserkal, patron and founder of Alserkal Avenue, explained “Over the last decade, Alserkal Avenue has grown and evolved organically with the arts and culture scene of the United Arab Emirates. The introduction of Concrete marks a new milestone as part of the cultural advancement of the region.”

This is OMA’s first built project in the United Arab Emirates, and was and led by Iyad Alsaka and Kaveh Dabiri. The interior design and engineering was completed by Dubai-based companies.

Vilma Jurkute, director of Alserkal Avenue says “The OMA team has brought their unique aesthetic and thoughtful approach to urban architecture to the Avenue, and, in doing so, they have created a space that has started a dialogue for architectural evolution in the UAE.” 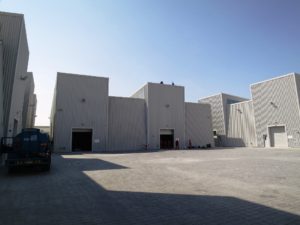 Before repurposing: The building when it was still a warehouse.

The planning strategy focused on maximizing the event area. All the services were consolidated on one end of the building, allowing the entrance and event spaces to be situated closer to The Yard, the district’s main outdoor public square.

The design for the interior introduces a flexible floor plan to accommodate the required program diversity. Four 8.10 meter pivoting and sliding walls can create multiple space configurations depending on the type of event.

To maintain a fluid space, all the major interior equipment has been integrated into the ceiling, leaving the walls and floors free of any components.

Two linear skylights have been positioned above the movable walls to allow either thin blades of light or full daylight depending on the configuration. 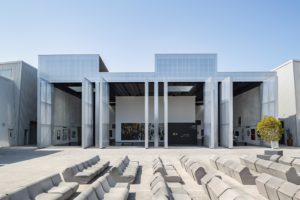 The original front façade of the warehouse has been replaced with polycarbonate cladding and full height operable doors. When the doors are open, the exterior and interior space can merge, activating the courtyard. The connection to the exterior is reinforced by the translucent polycarbonate, which brings the view, daylight and outdoor activities into the interior space.

Iyad Alsaka, OMA’s partner in charge of the project, concluded “The Gulf is an important region for OMA, and we are happy to have been able to collaborate with an organisation like Alserkal Avenue, whose vision is so similar to our own. With this project we wanted to keep the interior as neutral and flexible as possible, while transforming the existing exterior so that it would stand out from the surrounding buildings.”