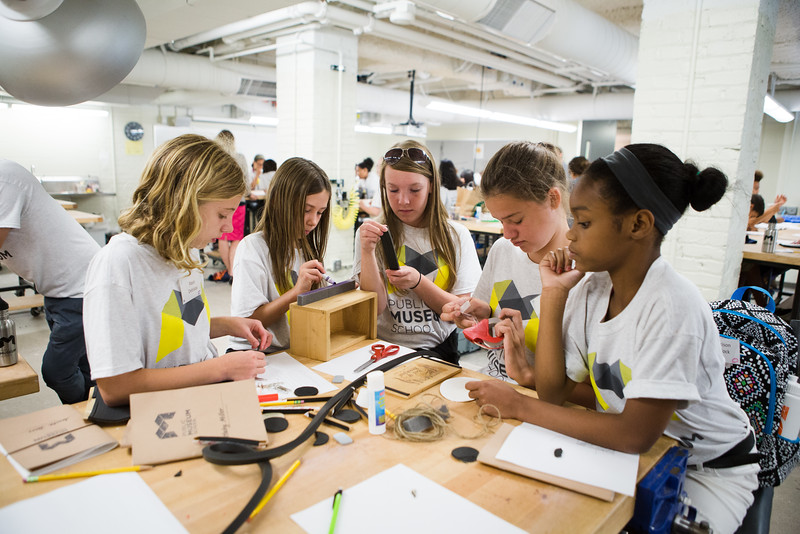 The old Public Museum building in Grand Rapids, Michigan is being repurposed and renewed as a state-of-the-art high school.

By the Fall of 2018, the ninth grade of Grand Rapids Public Museum School will begin classes there, expanding the program that now houses 180 sixth- through eighth-graders at the Van Andel Museum Center overlooking the Grand River.

Construction is due to be completed by August 1, 2018 on the high school, which will transfrom the historic building on Jefferson into a state-of-the-art school for students learning from their surroundings and applying knowledge to solutions. 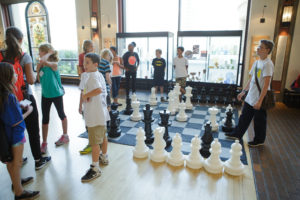 The $10 million renovation is being partially funded by a $10 million grant from the XQ Super School Project, which in 2016 chose GRPS as one of 10 districts nationwide for support of innovative schools. Another $2 million from a taxpayer-approved bond and a capital campaign are also supporting the project and other Museum School improvements.

The museum high school developed from a cooperative effort between the City of Grand Rapids and GRPS, which founded the public museum in 1854 and once housed it in a mansion on the Jefferson site. The Depression-era museum building was deeded to the city in 1937 on one condition – that it be used for museum purposes, and that it revert back to the school district if it ever stopped being used for that purpose.

For the past four years—before the Museum School opened its doors in September of 2015, KCAD faculty Gayle DeBruyn, chair of the Collaborative Design and Furniture Design programs, and Dr. Cindy Todd, chair of the Art Education program, worked cohesively with GRPS Museum School staff in designing an innovative curriculum that stretches the minds of its students and blends Common Core and additional K-12 standards with the design thinking process.

“You have to know what your constraints are—just as you would with any design problem,” DeBruyn says. “You know that you have to teach Common Core and 21st-century skills and all the accreditation requirements that exist within GRPS. You have to meet all those expectations. But it’s the ‘how’ you’re going to do it that is being reimagined.”

Dr. Todd explains that staff and students alike have learned to pace themselves through this innovative process, focusing on mastering one component at a time. “Everyone is learning with each other and because of each other— and that dynamic has been phenomenal,” she says. “Students here are having a very different learning experience than the average student. The city has become their classroom.”

The objective of the Museum School is to nurture authentic learning and let the students drive the process as much as possible, according to Rowland. Rather than teaching “siloed” subjects, Museum School faculty commonly weave various subjects together within the same lesson to create a fluid learning connection.

Each school project stretches the students’ independence and critical-thinking skills and helps them “unlearn” previously ingrained habits, such as the constant need to succeed and a tendency to refrain from taking risks. “One of the hardest things for them to learn is to think outside the box,” Rowland says. “We’re teaching them that failure is okay and taking risks is okay.”

Museum School staff attribute the school’s risk-taking and uncustomary culture to Hanks, a former associate professor at GVSU’s College of Education who has a background in education philosophy and school reform and experimentation. He believes the negative perception of failure has been a flaw in the traditional education setting.

Since September, Hanks has seen his students become more confident about stepping outside their comfort zones and dreaming up ideas that some might consider unconventional. “I’ve watched them grow significantly, make connections with each other, and be willing to speak up and question each other,” he says.

The school’s first year has been an experimental learning environment for everyone, including Hanks and the entire Museum School staff. Despite first-year challenges, staff and students have gained significant insight and knowledge that will lead the Museum School into the future.

“We’re putting everything on the table,” Hanks says. “Our partnership with KCAD helps us take a look at everything and ask, ‘Is there a different way to accomplish these goals?’”

As Museum School staff look forward to seeing this year’s students become 7th graders next fall, they are excited to welcome a new crop of 6th graders and strengthen the partnerships among GRPS, KCAD, and the school’s other collaborators.

“We’re building something brand new and we’re hoping this school is truly a new model for American education. And we can’t do that without KCAD as a partner,” Hanks says. “The relationship between GRPS and KCAD is fantastic. The KCAD faculty and staff we work with are completely supportive.”

Along the way, the curriculum has been tweaked, parents have given feedback, and the school’s lottery admission system has undergone changes—all to improve the Museum School’s nontraditional education setting and its mission.

“I think it’s one of the most interesting schools that we have. The school has become a true community school that belongs to KCAD, GVSU, the Public Museum, and GRPS. We all own this school,” GRPS Superintendent Teresa Weatherall Neal says. “What KCAD brings to the table in terms of art and design is helping students and will literally change the lives of these children. There are no boundaries for these kids.”

“There are opportunities for these schools in every corner of a community,” she says. “As KCAD has stepped up, it’s allowed other institutions in the community to ask, ‘How can we play a part in students’ learning?’”

Looking ahead, Hanks hopes the Museum School will blur the lines between high school and college. He would like to see future high school students have the ability to dual enroll at KCAD.

“We’ve learned a great deal about KCAD and the deep pool of talent among KCAD’s students and faculty,” he says. “I hope our partnership becomes tighter and the Museum School becomes a meaningful place for GRPS and KCAD students alike to have a great experience.”

XQ: The Super School Project is a competition that invites America to reimagine high school. People across the country have self-assembled into teams, and launched a movement to transform high school education in their local areas.

Much of this article originally This article and photos originally appeared on Kendall College of Art and Design website. Reprinted with permission.