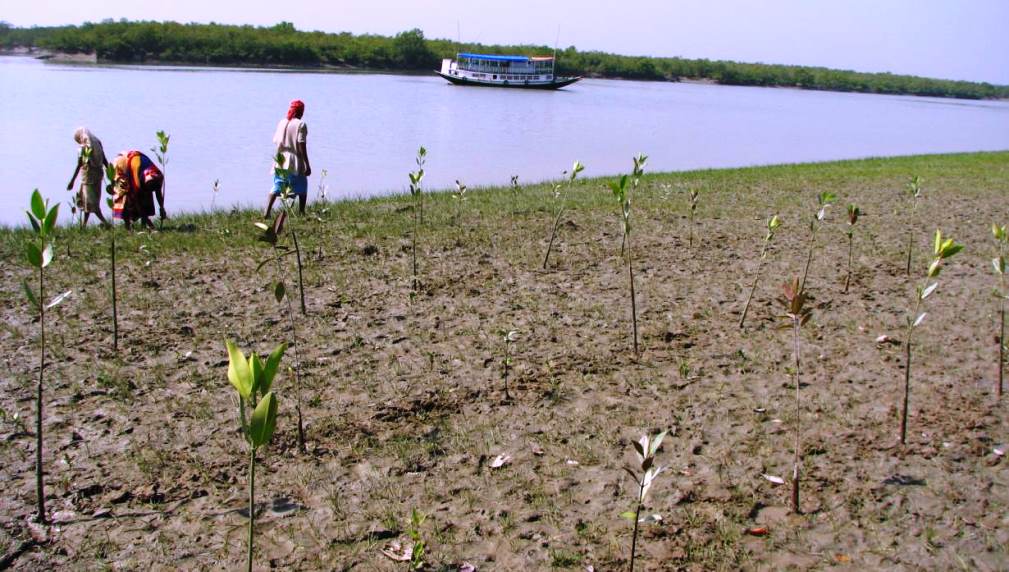 In Gosaba, India, Pushpo Mandal still remembers the day, nine years ago, when Cyclone Aila struck and the slender creek at the southern edge of her village swelled into a watery monster.

Tall tidal waves broke through the earth embankment, rushing into homes and fields, “gulping down everything that came their way“, recalled Mandal from Patharpara village on the coast of India’s West Bengal state. 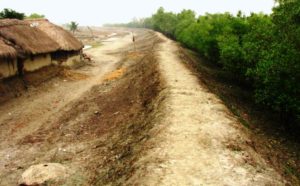 Patharpara, in the Gosaba block of South 24 Parganas district, near the border with Bangladesh, was among the many Sundarbans villages devastated by the ferocious 2009 storm.

Yet while the memory still haunts them, villagers have learned lessons from the destruction, planting mangroves to reinforce the embankments that protect their homes and fields from tidal surges.

Similar initiatives are also underway in other parts of India’s coastal states, such as Odisha and Tamil Nadu, as well as in Bangladesh, Thailand, Indonesia and Sri Lanka.

Sitting on the embankment that borders Patharpara, Pushpo’s husband Santosh described the earth ridges, 3-4 feet (0.9-2.1 m) tall, as “lifelines” that “stand as sentinels against the incursion of this saline tidal water into our villages”.

Without them, fields would be flooded by brackish sea water, making the soil saline and unfit to grow staple crops or vegetables. Surges of water into villages also damage homes and possessions, he added.

Abhijit Mitra, former head of the marine science department at the University of Calcutta, said mangrove forests next to embankments act as “bio-shields” against storms and tides.

“It has been studied that a strip of 50 metres (55 yards) of mangrove forests reduces wave energy by at least 50 percent,” he said, referring to research by scientists in Asia-Pacific.

The trunks, branches and above-ground roots growing from the stems of mangrove trees dissipate wave energy and reduce coastal erosion, functioning as a natural braking mechanism on the water – a phenomenon known as “wave attenuation”.

The aerial roots that protrude from the soil – enabling the trees to breathe during high tide – also exert frictional drag on waves, lessening their force further, he added. 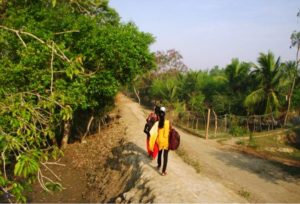 To keep the Gosaba block embankments in good shape, from 2012 a dozen villages got together to restore about 20 hectares (49 acres) of empty land adjacent to their embankments, planting community mangrove forests that run along tidal streams.

At first working as volunteers, they were later sponsored by local environmental groups that have funded the purchase of materials and logistics for the project.

The villagers said 30-35 km (19-22 miles) of embankments are now better protected as a result of their efforts.

With the Sundarbans regarded as one of the world’s climate change hotspots amid rising sea levels, locals recognise their growing vulnerability to the impacts of global warming.

“The tides are higher today; storms and cyclones too are more frequent since the past decade,” said Gopal Mandal, a teacher from the village who shares the community surname.

That has left the earth walls protecting local homes at greater risk of being breached by the water that lashes against them, but the mangroves help diminish the threat, he added.

Leading the community plantation drive, Arjun Mandal from Rajat Jubilee village said his team begins by collecting mangrove seeds that are dispersed by tidal waters from the forests and deposited on banks when the tides recede.

The gathered seeds are planted in small gunny bags, where they develop into 3-foot saplings, looked after by local women. 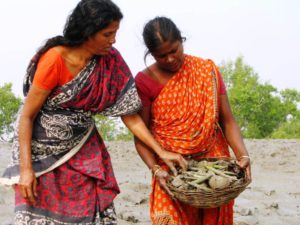 Women collecting mangrove seedlings along river banks, after the tide recedes in Gosaba on May 22, 2018. Photo by Thomson Reuters Foundation / Moushumi Basu.

Before the annual arrival of the monsoon, the villagers select appropriate sites to plant the trees. These are mostly inter-tidal zones next to river banks ideal for the growth of salt-tolerant mangroves.

The saplings are planted about four feet from one other, leaving enough space for development of the roots that rise above the soil surface.

The plantation sites are home to at least a dozen mangrove species. They are nurtured by the villagers who keep the areas clean and protect the saplings from cattle.

Santosh Mandal said local people had co-existed with mangrove ecology for generations, and their knowledge about the species had become “a part of our tradition, which is coming in handy to protect our villages today.”

With growing awareness among experts and environmental groups of how mangroves can cut the risk of disasters, villagers are now being encouraged to use their expertise to restore forests that have become degraded over time.

“Mangroves have proved to be our true friends in need,” said Pushpo Mandal.