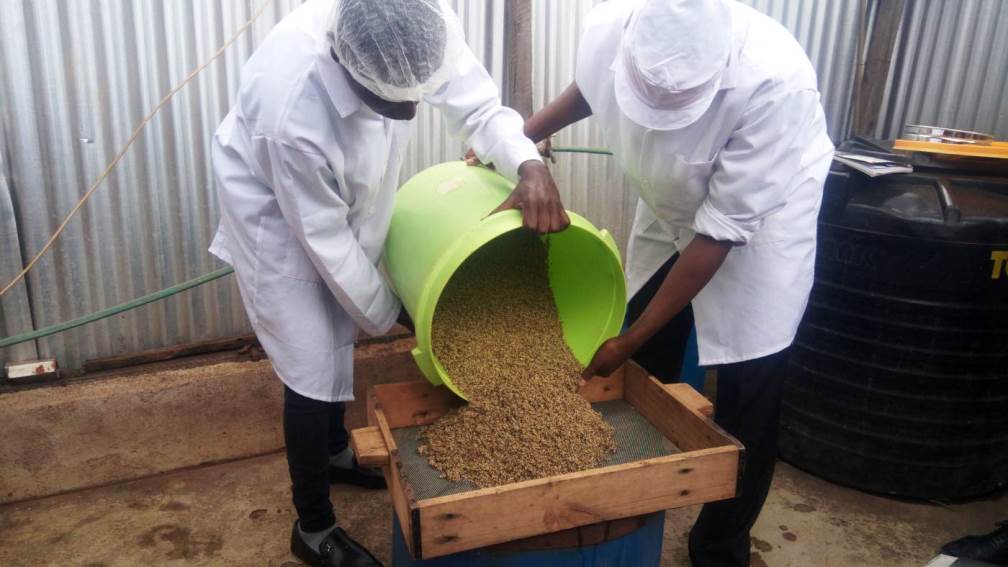 Using a $1,000 machine he bought, he pops millet—a drought-tolerant grain, but one not as widely eaten as staple maize—and turns it into a popular snack.

Over the last two years he has sold about $1,500 worth of the popped grain, and is the first in the district to have one of the machines, he said.

The combination has won particular approval from students looking for an after-school snack, he said, and is now sold at the local Embu market.

As many households in sub-Saharan Africa struggle with poverty and food insecurity, climate change is hitting harvests and making life even harder.

But finding new markets for hardy grains that can better stand up to extreme weather and changing pests, and produce a reliable harvest, can help, agricultural scientists say.

Gichangi’s effort began when he joined a women-led agribusiness group in his village and started buying and selling traditional cereals such as millet, sorghum and green gram, all more drought-resilient alternatives to maize.

Previously, maize dominated farming in the area – but that dominance is gradually declining as weather extremes linked to climate change make getting a harvest more difficult, he and others said.

Patrick Maundu, an ethnobotanist at the National Museums of Kenya and an honorary fellow with Bioversity International, an organisation that promotes agricultural biodiversity, said millet is a traditional Kenyan crop – just one that, over the years, lost ground to maize (corn).

The change came as a result of the intense promotion of maize production by governments, research groups and multinational companies selling products in Africa, he said.

“Millet is well adapted to dry parts of Africa but has been neglected because of … key policies focused on maize, taking over indigenous cereals,” he said in an interview with the Thomson Reuters Foundation.

But in the recent years, wilder weather linked to climate change and the high cost of farm inputs—which farmers can struggle to pay if harvests fail—has made maize farming less reliable, particularly for small-scale farmers like those in Embu, Maundu said.

That has pushed many farmers to diversify back into drought-resistant traditional crops.

The amount of farm acreage planted with maize in Kenya has fallen by about a quarter in recent years, according to data from Kenya’s Ministry of Agriculture.

Still, finding a ready market for crops like millet – and getting people to resume eating them – can be a challenge.

Gichangi, an entrepreneur and millet farmer, said he realiZed that the key to making the new crops pay was adding value to what was harvested – hence the popping machine.

The puffed millet, besides being tasty, has boosted employment opportunities in Embu and helped reduce food waste because it can be stored longer, he said.

Stella Gathaka, 30—who formerly worked as a food vendor—is now one of four workers at Gichangi’s small factory.

She said that, besides earning a salary, her new job allows her children to eat the millet snacks, which are more nutritious than their previous snack of sweet wheat biscuits.

These days, “I’m very knowledgeable on the importance of millet as a nutritious crop,” she said.

Daniel Kirori, operations director at DK Engineering Ltd., which assembles the popping machines, said his company had sold about 15 of them so far to women’s groups and other entrepreneurs around Kenya.

According to a 2017 United Nations report on the state of food security and nutrition, climate change pressures, from worsening droughts to floods, heatwaves and storms, are a key reason about 800 million people still lack access to enough food.

Liz Young, a senior researcher with the International Food Policy Research Institute noted in an interview with the Thomson Reuters Foundation that Africa’s farmers urgently need help to adapt to the threats and grow enough to feed the continent’s rising population.

Producing more millet and other traditional hardy crops, and finding ways to process them to produce more income, is one way of doing that, Young said.

Emily Wawira, a small-scale millet farmer in Embu who sells her produce to Gichangi, said she sells 10 to 20 sacks of grain each year, each weighing 90 kilos, and earns $25 to $30 per sack. That income “is enough to pay school fees,” she said – and an improvement on her former loss-making maize farming.

Now, however, Gichangi has partnered with four local schools and an agricultural show to offer his healthier snacks.

Anthony Sawaya, Embu County‘s director of trade and chief executive of the county Investment and Development Corporation, said his office is keen to help innovators like Gichangi access markets.

The county government, for instance, is promoting local foods at nearby and international trade fair exhibitions, he said.

This article by Wesley Langat (edited by Laurie Goering) originally appeared on the website of the Thomson Reuters Foundation, the charitable arm of Thomson Reuters. Reprinted here (with minor edits) by permission.