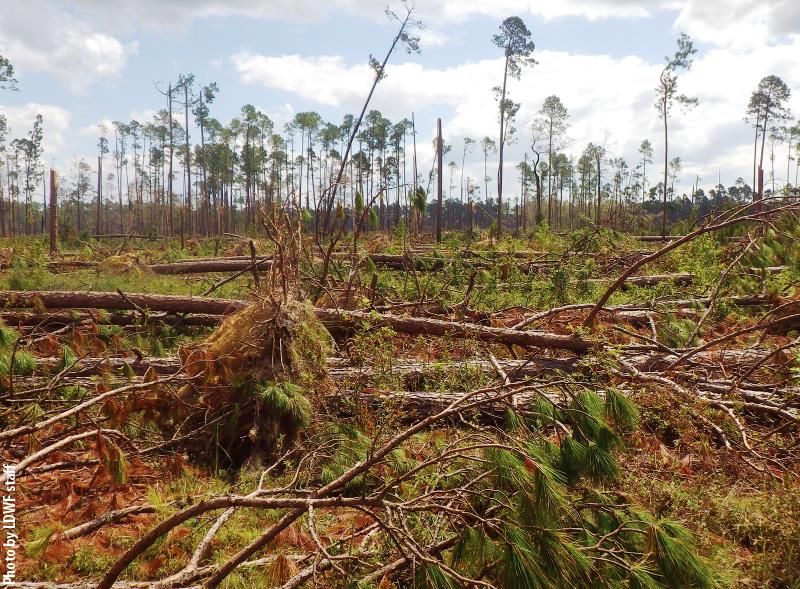 The Kisatchie National Forest, in collaboration with the Louisiana Department of Wildlife and Fisheries, has initiated the Longleaf Pine Flatwoods Savanna Restoration Project.

The flatwoods savanna project area has been set aside for intensive ecological restoration and research due to its high biodiversity and distinct geology as well as the extensive damage it sustained from past human activities and recent severe wind events.

This project encompasses approximately 7,324 acres on the southern end of the Vernon Unit of Kisatchie National Forest. Prior to U.S. Forest Service ownership, this site was clear-cut for timber production in the 1930s. With a timber production focus, the Civilian Conservation Corps converted open longleaf pine flatwoods savannas to dense forests of slash pine (Pinus elliottii), which is not native west of the Mississippi River.

The Forest Service has reintroduced fire to the landscape, opened up some of the dense slash pine stands to restore a savanna habitat, and begun replacing slash pine with native longleaf pine.

Longleaf pine flatwoods savannas are ancient landscapes that have been formed over millennia by many very complex interactions between fire, water, wind, and wildlife. These longleaf pine systems occur on the outer coastal plains of the southeastern United States (see range map below).

Historically, lightning strikes ignited natural fires which shaped the biota, structure, and distribution of longleaf pine communities. These lightning strikes occurred throughout the year, but were most frequent during the early growing season (April-June) and typically occurred once every one to three years on average. Many of the savannas in the surrounding areas are fire-suppressed which has led to minimal groundcover and dense brush encroachment. 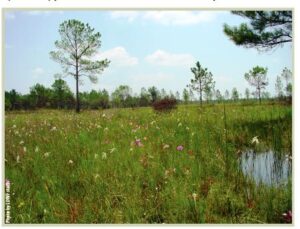 The high species diversity and richness of this site is in part due to the unique and complex topography. Characteristic features of this community type include slight rises in elevation in the shape of small circles or ovals called pimple mounds, depressions called ponds, and wet to dry flats.

These ancient landscape features formed during an arid period when vegetation was sparse and winds shifted sediment across the landscape. These winds scoured out depressions and redeposited sediment at the base of remaining sparse clumps of vegetation, forming ponds and pimple mounds.

Pimple mounds are generally 1.5 to 6 feet high and 30 to 90 feet in diameter. The ponds range from 0.1 to 20 acres but typically are 1-5 acres. They vary from several inches to about 3-5 feet deep and fluctuate between seasonal to nearly year-round inundation.

Historically numbering in the millions, the pimple mounds covered large sections of western Louisiana and East Texas. Site preparations and leveling for agriculture, pine plantations, and urban development have erased a staggering proportion of these unique features from the landscape.

Longleaf pine natural communities are among the most threatened ecosystems in the United States.

Restoration of this ecosystem is increasingly important to avoid continued decline or complete loss of the ecosystem and the benefits it provides.

The longleaf pine flatwoods savannas and upland savannas on the southern portion of the Vernon Unit received the most extensive and severe wind damage (over 20,000 acres damaged). Varied use of heavy machinery for debris removal was employed to test the effects on the recovery time of longleaf pine systems.

These sites will be monitored for long-term research and the data will be used to identify best management practices for future storm clean-up operations in sensitive habitats.