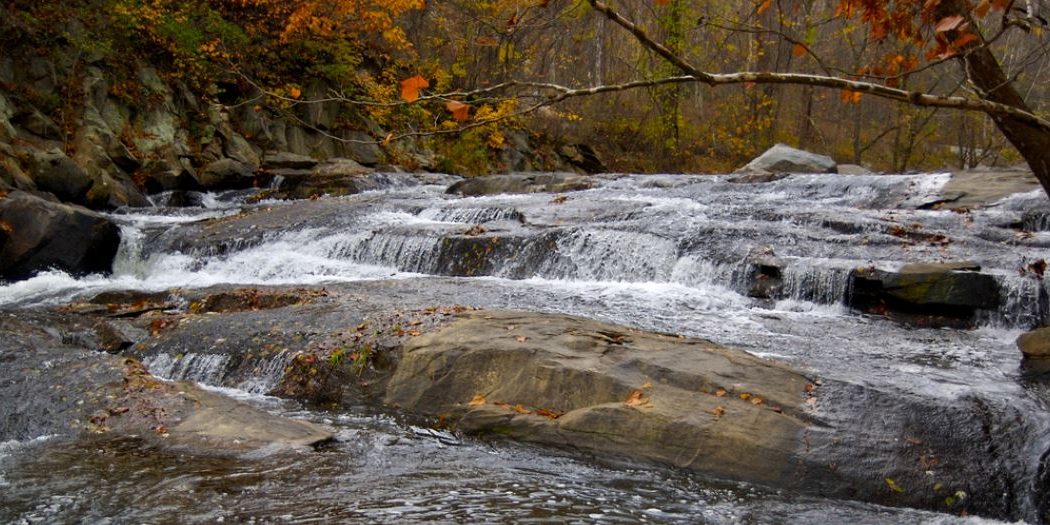 Over the next few months, there will be a lot to celebrate for those living near Maryland’s Patapsco River. When the Bloede Dam comes down, the river will not only be safer for visitors, it will help revitalize the health of the entire Chesapeake Bay.

While the Patapsco has had a positive impact on the environment and the people of Maryland, the Bloede Dam has done just the opposite. In truth, the dam has placed a huge burden on the river for more than a century – causing tragic deaths as well as damage to the river’s health.

American Rivers has been fighting for the removal of the Bloede Dam for nearly a decade. What follows is the story of what will become one of our country’s most critical dam removal and river restoration projects to date.

The name “Patapsco” is derived from the Algonquian pota-psk-ut, which translates to “tide covered with froth” or “backwater.” As a major river of the United States, both in terms of its history and geography, the Patapsco is rich with stories.

In the historical timelines of this country, the mapping of the Patapsco River is old news, as in, before-the-Pilgrims old. It was actually John Smith of Jamestown fame who first mapped the river in his travels throughout the waters of the mid-Atlantic, sometime in the early 1600’s. The river begins in central Maryland and eventually makes its way to the Chesapeake Bay, flowing through Baltimore in the process. If you’ve ever ridden a paddle boat or eaten a crab cake along Baltimore Harbor, you were on the Patapsco.

The path of the river made it ripe for industry, and in the 1800’s the Patapsco was one of the birthplaces of the industrial revolution in America. For nearly a century, foundries, iron and flour mills, and textile factories flourished up and down the river. The mainline of the Baltimore and Ohio (B&O) Railroad ran along the Patapsco Valley. With this growth stemmed a need for additional power sources. Common for that time in our history, the community built Bloede and other dams in the region to capture hydropower for these growing industries.

Come the turn of the 20th century, as with many early industrial rivers, the factories and mills closed shop, giving the Patapsco a very different role in the community. Along its 39-mile course, the river now provides important habitat for a variety of fish and wildlife and offers recreation opportunities for outdoor lovers in the Baltimore metro area. The river flows through the heart of Patapsco Valley State Park, popular with families looking for swimming, fishing, paddling and a connection with the outdoors.

Unfortunately, some of its industrial history still haunts the Patapsco.

The challenges from Bloede Dam aren’t unique. With more than 90,000 dams blocking rivers across the United States and at least 659 dams in Maryland alone, our country’s dams have become increasingly dangerous for people and harmful to the environment. While many still assume dams are intrinsically beneficial, the reality is they cause a variety of problems: disrupting the free flow of water, changing the temperature and overall quality of the water, and destroying habitat for fish and other wildlife.

Take Edwards Dam, on Maine’s Kennebec River, for example. Next year, 2019 is the 20th anniversary of the removal of Edwards Dam. Prior to dam removal, the river’s fish populations were struggling. Migratory fish weren’t able to swim from the ocean up the river, because the dam blocked their way. Now that the dam is gone, millions of alewives return to the Kennebec each year — the largest migration of its kind on the eastern seaboard.

And, like Bloede, many dams are not aging well. This creates maintenance headaches for dam owners, along with safety concerns — increasingly frequent and severe flooding across the country is putting additional stresses on outdated dams. And dam failures can be deadly for downstream communities.

In short, many dams are no longer serving the purpose they were built for, and are actually creating more harm than good.

American Rivers advocates for removing dams whose costs outweigh their benefits. More than 1,300 dams have been removed across the country since 1912. Last year, 2017, was a record year for dam removal, with 82 dams torn down nationwide.

And in the case of Bloede Dam, it’s been a long time coming. 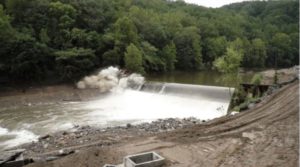 Victor Bloede, a wealthy inventor and entrepreneur, financed the development of Bloede Dam in 1906, which was a reinforced concrete slab and buttress dam. The hollow interior allowed room for the turbines to function inside of the dam, making Bloede the first underwater hydroelectric dam in the world.

Living somewhat outside the purview of the major electric utilities of the day because of its location on the Patapsco, Bloede supplied electrical power to both the cities of Catonsville in Baltimore County and Ellicott City in Howard County. Politics and economics being what they were, this independence was short-lived, and after ownership bounced around to a few other electrical utilities, the dam went dormant in 1924, less than 20 years after it was built.

By 1938, Bloede’s ownership was transferred to the Maryland Department of Natural Resources, on whom it has been a burden ever since. For years, it has served no functional purpose, becoming even more of an impediment when part of it was damaged during Hurricane Agnes and subsequent flooding in 1972.

Simply keeping the dam as it stands has proved to be a costly endeavor. $1.5 million was invested to build a fish-ladder in 1992, and recent research determined keeping the dam in place would have required at least $1 million in repairs to comply with Maryland dam safety requirements.

And then you have the environmental damage.

Removing the Bloede will increase the range of local fish, adding more than 65 miles of spawning habitat for river herring, American shad and hickory shad. The American eel will benefit from more than 183 miles of open river!

Historically, river herring (blueback herring and alewife, collectively) and American shad were a major fishery resource throughout the Chesapeake Bay and a common food staple for Native American tribes. The commercial harvest for American shad peaked in 1890 when landings in Maryland exceeded seven million pounds.

In the Patapsco, Bloede Dam is essentially creating a wall that blocks shad and river herring from moving to spawning grounds upstream. These animals are simply not successfully negotiating the labyrinth of a fish ladder to move upstream. American eel, a little more acrobatic by nature, are able to scale the dam in small numbers, but they too will benefit greatly from this removal project. After all, not everyone is Simone Biles. 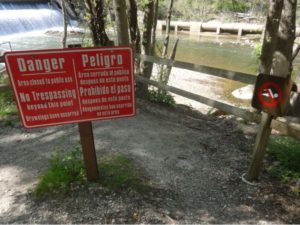 Already an ecological disaster, this 34-foot high by 220-foot long dam has become a serious public safety hazard within Patapsco Valley State Park. Injuries and deaths have repeatedly occurred, with at least nine dam-related deaths since the 1980s, the most recent of which occurred in June 2015. Another near-death experience happened for two teenagers just earlier this year. The dangerous currents at the base of the dam are a death trap for swimmers.

One such incident occurred in June 1981, and Patapsco Valley State Park ranger Paul J. Travers was on duty. On summer days, the heavily wooded park filled up with high schoolers from the suburbs between Baltimore and Washington, D.C. Ignoring the “no swimming” signs, they would splash into the Patapsco River and lounge on its huge boulders. Dozens of kids were swimming that day, sliding down the old, defunct Bloede Dam into the deep pool below. Suddenly, one of the kids disappeared underwater. His friends waited for him to surface. But he never came back up. Travers was there when rescuers pulled the teenager’s lifeless body from the water.

“Bloede Dam had killed again, its deadly currents trapping the victim in an underwater whirlpool known as a ‘drowning machine’… Whenever I patrolled the dam after the accident, my thoughts always revisited the heartache of that afternoon… Today we can give Bloede Dam the death sentence that it rightfully deserves. Removing the dam is not a financial option, it is a moral obligation,” said Travers at the time.

Given the environmental and safety issues, it’s long past time for Bloede Dam to come down. Restoration efforts on the Patapsco River began with the removal of two other dams, Union Dam in 2010 and Simkins Dam in 2011. American Rivers was already involved at this point, and shifted our sites to Bloede.

“The benefits of this project will resonate long into the future, improving the lives of community members, revitalizing the health of the Bay, and inspiring a new generation about the importance of healthy, free-flowing rivers.” 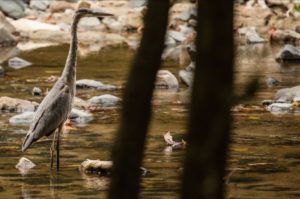 On September 11, 2018 a blast of dynamite took a large piece out of Bloede Dam, starting the final process of demolition.

Because the dam serves as the first barrier on the Patapsco River blocking fish swimming to and from the Chesapeake Bay, its removal is the linchpin of a comprehensive ecosystem restoration plan: restoring more than 65 miles of spawning habitat for blueback herring, alewife, American shad, hickory shad, and more than 183 miles for American eel in the Patapsco River watershed.

Rivers, flowing freely, have a remarkable ability to heal themselves. As the Patapsco finds its natural course once again, it will flush out sediment and other debris, build sandbars, and create the habitat fish and wildlife need to thrive. A year from now, visitors will be able to swim, boat, and potentially float nearly 17 miles of the Patapsco from below Daniels Dam to near the mouth of the river, largely unencumbered.

The Patapsco River Restoration Project is more than just a dam removal project. By working with Friends of the Patapsco Valley State Park, we hope to also leverage river protection tools such as Wild and Scenic designation and the river’s recreational resources to continue to keep the Patapsco a river the community can be proud of.

Removal of Bloede Dam is possible thanks to a partnership of American Rivers (donations welcome!), the Maryland Department of Natural Resources, National Oceanic and Atmospheric Administration, U.S. Fish and Wildlife Service, and others.

This article originally appeared on the American Rivers website. Reprinted here with permission.