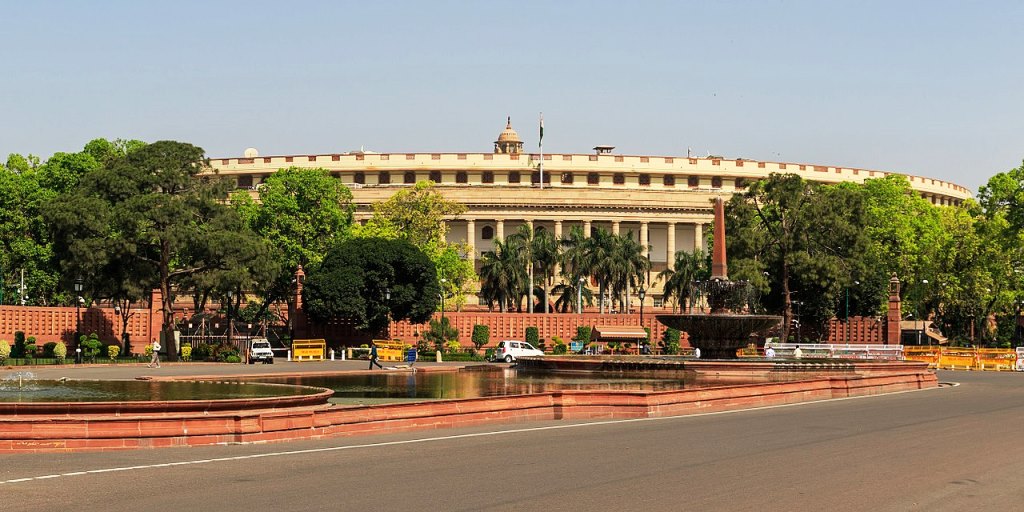 Originally called the House of Parliament, the Parliament Building (usually known as “Parliament House” in English) in New Delhi, India was designed by the British architects Sir Edwin Lutyens and Sir Herbert Baker in 1912-1913 as part of their wider mandate to construct a new administrative capital city for British India.

It’s said that the circular structure of the 11th-century Chausath Yogini Temple may have inspired the design of the building. Construction of the Parliament House began in 1921, and it was completed in 1927.

Now, on October 25, 2019, the Central Public Works Department (CPWD) of the Government of India announced that the contract to restore and redevelop the historic structure has been awarded. The work is expected to take a little over four years.

The official announcement appears below: 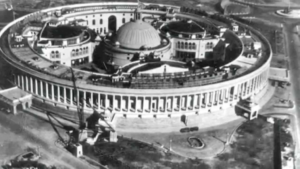 1926 photo of Parliament House courtesy of the National Archives, Government of India.

CPWD has awarded the consultancy work to M/s HCP Design, Planning & Management Pvt. Ltd. on 18.10.2019 and now the firm is on board for development of the Master Plan of Central Vista area and design of buildings as per new requirements.The Govt. has set stringent timelines to complete the development/redevelopment of Parliament building, Common Central Secretariat and Central Vista. While the timelines given to CPWD to complete the Central Vista project is November, 2021, the work on Parliament building is to be completed by March, 2022 and the common Central Secretariat by March 2024.

With an aim of improving the old buildings on Raisina Hills, make improved Common Secretariat Buildings, refurbish old Parliament building, make new space for new requirement of MPs and upgrade the entire Central Vista area by revisiting entire Master Plan, a world class Consultant was required.The process of selection of Consultant was started on 02.09.2019 when a Notice Inviting Bid was issued by CPWD.To meet the objective of selection of a reputed consultant, a system of QCBS (80 : 20) has been adopted. The sanction towards cost of consultancy has been issued for Rs. 229.75 Cr. As per the RFP, a pre-bid conference meeting was also held on 12.09.2019 where 24 bidders participated. The issues raised in the meeting were addressed. The Technical Bids were opened on 30.09.2019. A total of six bids were received. After examining the initial eligibility and technical parameters, all bidders were asked to make their presentation on 11.10.2019 on Approach and Methodology before a Jury consisting of reputed Architects and Landscape Designer under the chairmanship of Prof P.S.N Rao, Director, School of Planning & Architecture(SPA), Delhi and chairman Delhi Urban Art Commission(DUAC). Four Bidders were formally selected for opening of financial bid, which was opened on 12.10.2019.

After assigning the weightage of 80% to technical i.e. quality aspect and 20% to financial, M/s HCP Design, Planning & Management Pvt. Ltd. have emerged the highest scores. They are one of the leading architect firms in India, having vast experience of designing various buildings and spaces like Central Vista and State Secretariat at Gandhinagar; Sabarmati River Front Development, Ahmedabad; Mumbai Port Complex;Redevelopment of Temple Complex, Varanasi; New Campus, IIM Ahmedabad and CII-SN Centre of Excellence Kolkata etc. They have designed some projects outside India also. After the Master Plan is prepared the steps would be taken to execute the works by CPWD by awarding the works to reputed eligible contractors.

The buildings on Raisina Hills were constructed in the period from 1911 to 1931, designed by Sir Edwin Lutyen and Sir Herbert Baker. At that time, also these were designed to have office for viceroy & Secretariat. The Parliament building was constructed in the same period. Various buildings along Rajpath have been constructed at different stages for accommodating offices of various Central Govt. Ministries and Departments. The Central Vista starting from Rashtrapati Bhawan upto India Gate is the heart of city which has been point of attraction for visitors from all over the world.

Over a period of above 100 years after the conceptualisation of building on Raisina Hill and adjoining to Rajpath, the requirement has now increased manifold. These buildings designed earlier are not now able to provide enough space, amenities and comfort requirement. The requirement of safety standards have also got improved. In terms of offices, now more space is required to accommodate all Central Govt. offices at nearby area. Due to delimitation, more Nos. of MPs may be there in future and hence more space is required for them. Even for present MPs, the space and amenities required is quite insufficient in Parliament House.Lots of visitors come to Central Vista from India & abroad and there is an imperative need to improve the beauty of Central Vista to make it a world class tourist attraction point.

Photo of Parliament House by A. Savin via Wikimedia Commons.