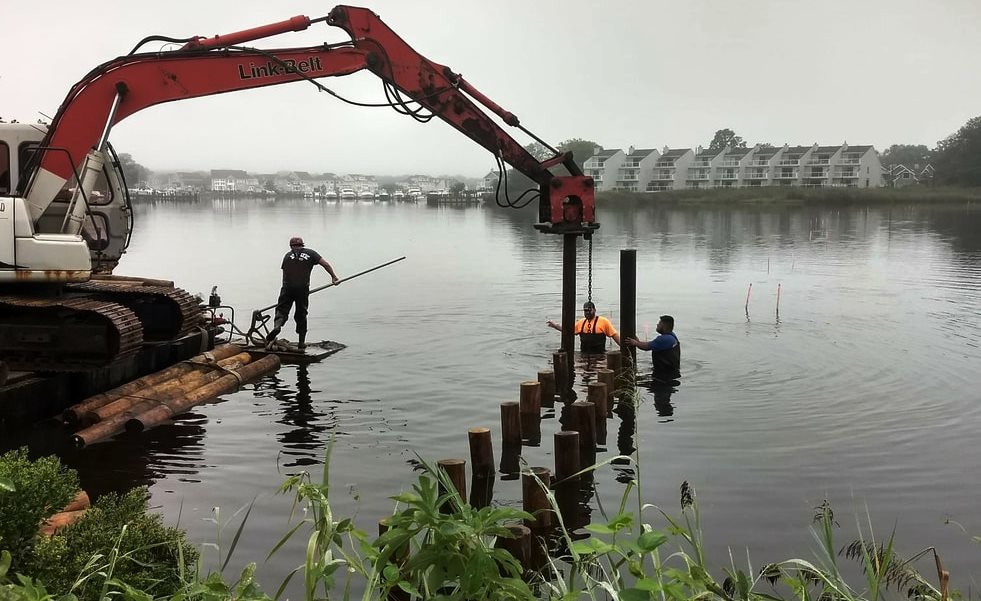 In one New Jersey town, repurposed Christmas trees—otherwise destined for the landfill—will be reborn in a new role that helps restore and protect the local shoreline.

“We want people to think of the restoration at Slade Dale as a holiday miracle that they helped create,” said Capt. Al Modjeski, Habitat Restoration Director for the American Littoral Society. “Rather than mulching or burning trees, the community came together to provide inexpensive materials that will not only restore a shoreline but help protect the surrounding area.” 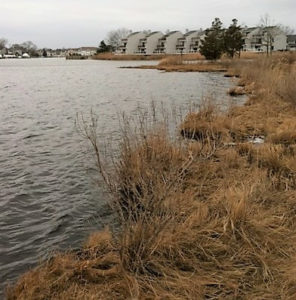 As part of an American Littoral Society project, trees will be collected and recycled in Point Pleasant to help protect the shoreline of a tidal creek running past Slade Dale Sanctuary.

Located in Point Pleasant, Slade Dale Sanctuary is a 12.93-acre preserve situated along the North Branch of Beaverdam Creek, a tidal tributary that flows into the larger Metedeconk River and, eventually, Barnegat Bay.

The Sanctuary’s pine-oak forest, hardwood swamp, and salt marsh provide a space of protected wilderness in an otherwise heavily developed coastal area of New jersey. The salt marsh at Slade Dale helps protect uplands from flooding during storms. It also provides nursery habitat for fish, and foraging habitat for birds such as osprey, egrets, and bald eagles.

Unfortunately, Slade Dale Sanctuary is disappearing. The shoreline has eroded approximately 300 feet since 1930, and almost all low marsh habitat has been lost. In addition, the current vegetation composition of the site shows evidence of marsh retreat: dead or dying upland tree species in current wetland areas suggest these locations were previously upland and have since become inundated as the shoreline eroded.

In September 2018, the American Littoral Society oversaw the installation of over 300 wooden pilings. These pilings are the first steps in the construction of branch box breakwaters that will prevent further erosion, foster sedimentation, and restore low marsh habitat at Slade Dale.

In Spring 2019, Christmas trees donated by local residents will be placed between the pilings to complete the breakwaters. Multiple Christmas tree vanes will also be installed. 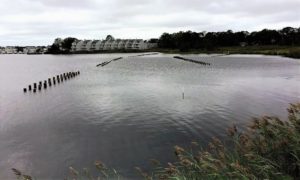 “This project is a model for other living shoreline efforts, puts our sustainability principles into action, and reflects wonderful partnerships,” said Tim Dillingham, Executive Director of the American Littoral Society.

A few weeks earlier, on December 10, 2018, the American Littoral Society was the recipient of two New Jersey Governor’s Environmental Excellence Awards for their restoration work.

Eleven organizations and individuals were recognized at the 19th Annual Governor’s Environmental Excellence Awards (GEEA) for work in various areas of environmental stewardship.

It marked the first time since the inception of the GEEA in 2000 that a single organization has received two in one year. The Littoral Society also previously received GEEA’s in 2011 and 2015, for the “Bayscape for Barnegat Bay” Healthy Ecosystem project and work restoring coastal habitat on the Delaware Bayshore, respectively.

“This year’s winners exemplify New Jersey’s strong commitment to protecting the environment and following practices that will help us fight climate change and sea-level rise, while also improving flooding resiliency around the state,” New Jersey Department of Environmental Protection Commissioner Catherine R. McCabe said at the ceremony. “Their fine work is an example to us all, and I congratulate the winners for their outstanding achievements.”

The DEP received 50 applications for this year’s awards. A panel of judges reviewed and scored the nominations. To learn more about the program, visit www.nj.gov/dep/eeawards/.

“I am very pleased and proud that the excellent work of the Society and our partners is being recognized in such an important way,” said Tim Dillingham, Executive Director of the American Littoral Society. “Our work is not only restoring important environmental resources and places but pioneering how we can do that statewide. In an age of changing climate, we need new approaches and partnerships like these that are proven to work.”

The Governor’s Environmental Excellence Awards Program is New Jersey’s premier awards program for recognizing outstanding environmental performance, programs and projects throughout the state. These awards recognize individuals, businesses, institutions, communities, organizations, educators, youth and others who have made significant contributions to environmental protection in New Jersey.

The Littoral Society was recognized for a project to restore the inlet to Wreck Pond in Spring Lake, New Jersey, and the “Clean Water, Beautiful Bay” project, which involved a series of initiatives designed to reduce pollution going into Barnegat Bay via stormwater runoff.

The $7.4 million restoration of Wreck Pond, which was administered by the Society, began in July 2015 as a collaborative effort to solve problems that have plagued the pond and surrounding communities for decades. A 600-foot-long fish passage served as the cornerstone of the project, as it would not only improve water flow between the ocean and badly polluted 73-acre coastal lake, but also decrease localized flooding, and bring life back to the Wreck Pond watershed.

Work on the fish passage was completed late in 2016 and the Society has spent the last two years monitoring both water quality and wildlife in the pond. As part of that effort, the Society trained citizen scientists who will help gather information on the project for the next few years.

With the help of those citizen scientists and other partners, the Society found a marked resurgence of migratory fish spawning in Wreck Pond, which would indicate that the project can be a model for other similar waterbodies along the eastern seaboard.

“We’re honored to be recognized for a project that is a model for how we can effectively and efficiently plan, fund, and implement a restoration project that helps people and the environment,” said Capt. Al Modjeski. “We’re also pleased that it brought together a wide array of federal, state and local partners, to work together toward common goals that will benefit community residents and coastal resiliency.”

“Our “Clean Water, Beautiful Bay” projects have demonstrated that green infrastructure improvement techniques not only reduce flooding and pollution problems at businesses, schools, and public recreation locations, but also that such projects can help protect and restore our beloved Barnegat Bay,” said Helen Henderson, Mid-Atlantic Ocean Program Manager for the American Littoral Society. “The willingness and participation by the variety of public and private partners is a testament to their desire for a clean and healthy Barnegat Bay. The work also lends support to future local, county, or state efforts to fund these types of improvements on watershed-wide scales.”

All photos are courtesy of the American Littoral Society. Featured photo shows pilings for a breakwater being installed along Beaverdam Creek at Slade Dale Sanctuary in Point Pleasant, NJ.