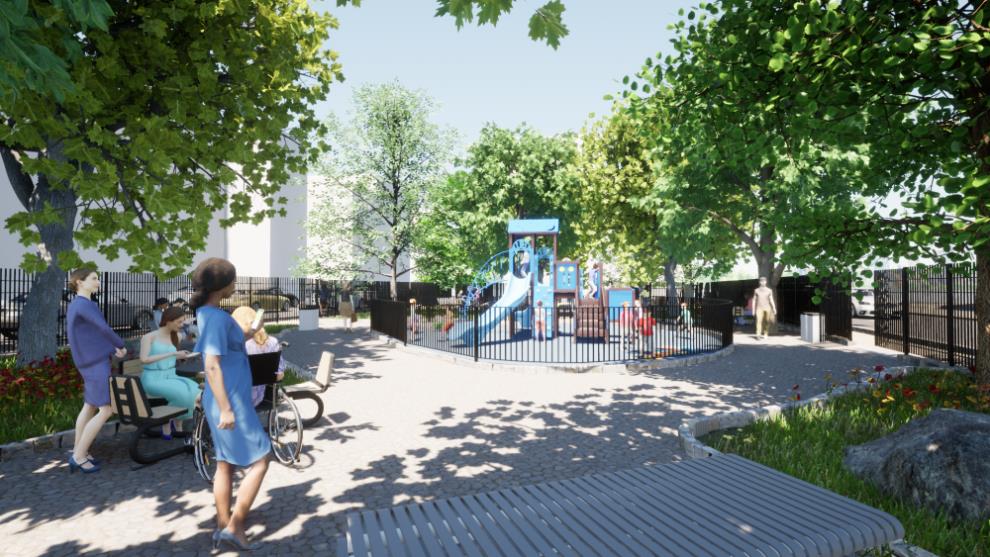 Back in 2021, Jersey City, New Jersey committed to permanently transform Fairmount Square Park from an unusable island surrounded by busy roadways into optimized recreational space for local residents to enjoy.

The recent acquisition of an unsightly car storage lot will be used to increase the size of the new neighborhood park in the Bergen-Lafayette neighborhood by 40%.

“We are creating this brand new park at the residents’ request, and today, we’re taking it a step further by transforming an adjacent scrap yard into green public space to foster community and promote physical and mental activity outdoors,” said Fulop.

“After hosting numerous community meetings and surveys, this transformational park is the latest example of how we continue to look for ways to help neighborhoods in all six wards meet their fullest potential by listening to the residents’ needs and turning their input into actionable steps to improve the community and quality of life overall,” he added.

Following the success of the City’s 2019 pilot program to replace the underutilized space with a functional park, which has remained in place since, the City conducted a traffic assessment and held numerous community meetings to incorporate residents’ input into the new vision for a safe outdoor recreational area to benefit the neighborhood.

With the acquisition of the additional property currently used to store cars for an auto body shop, the City will expand the park by an additional 3,200 square feet. In addition, the project examines and implements various safety improvements to provide families better access to and from the new park.

The additional lot to extend the park along Storms Avenue, being purchased by the City for $275,000, was in negotiations for larger development when the City engaged the property owner with the intention to expand and preserve open space. The property owner is a lifelong Jersey City resident who recognized the inherent value of transforming the lot into an extension of the new Fairmount Square Park for the community’s benefit.

The Fairmount Park renovation design was developed with community input to include playground equipment and permanent infrastructure with new tree plantings, seating, restriping pedestrian crosswalks, fencing, landscaping, a flagpole, and other elements being installed this year for residents to safely enjoy in the newly established public space. The reimagined park space advances the administration’s goals by combining Vision Zero, place-making, and sustainability efforts for a diverse, intergenerational community in Ward F.

“This project has been a long time coming, and we are grateful to see the City stay on top of the original plans, as well as plan on making the space even bigger for our community and families,” added Summit Avenue resident Joey Sforza.

“Our community and the children that reside here are deserving of a space that is beautiful, fun, and safe! A parking lot that is filled with unused and broken cars is both an eyesore and not beneficial to anyone in the surrounding area. The park, including this added extension, will be for everyone who lives in the area to enjoy and bring life and joy to our community!” he continued.

The process of the entire park improvement project, from start to finish, will be published by Blue Zones to be used as case studies for what other municipalities around the nation can do to achieve similar success.

The new Fairmount Park fully incorporates the surrounding street space – at the intersection of Fairmount and Summit Avenues – to create unified park space, including a sidewalk around the perimeter and a pedestrian traffic signal to allow families to cross safely at nearby intersections. Additionally, eliminating the cut-through streets will improve traffic safety by reducing the number of conflict points between pedestrians and motorists.

The City secured a grant for the park project by the Made to Move program, funded by Blue Zones and the Degree Foundation. Jersey City is one of five municipalities nationwide awarded the grant to fund projects that promote healthy living and active transportation and serve as a model for other communities.

“The Coalition looks forward to working with our City officials and the community to transform a former scrap yard into usable public green space for all to enjoy,” he concluded.

The Fairmount Park project aligns with the City’s broader efforts to expand and improve neighborhood parks for all Jersey City residents. Through the first allocation of Jersey City’s Open Space Trust Fund, enacted under Mayor Fulop in 2016, over 20 additional park improvement projects spanning the City are underway or already completed.