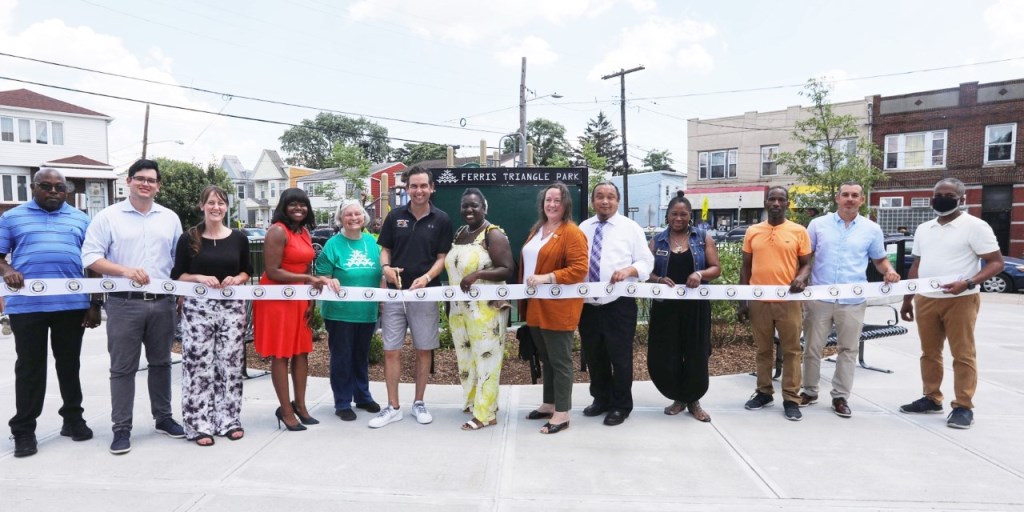 Located in Jersey City’s Greenville section – consisting of a brand new, ADA compliant playground area, a splash pad with push-button activation, among other much-needed upgrades throughout the park. 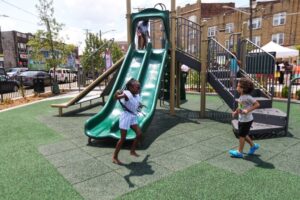 “Triangle Park has been a priority under our Open Space Trust Act with a goal of reclaiming the public park space to bring out its fullest potential for the benefit of neighborhood residents, and so we worked directly with the community to understand their needs and bring them to fruition,” said Mayor Fulop.

“This is a great way to kick off summer, especially for many of the local children and families as these park improvements provide an easily accessible outdoor recreational space where they can cool off and have fun under the sun,” he added.

“The Triangle Park renovation is a great example of collaboration between residents and their local government. Members of the Triangle Park community worked to have this park restored, and we will continue to work together to keep the park activated and in good condition,” said Ward A Councilwoman Denise Ridley.

The Triangle Park Community Center, a ministry of Episcopal Jersey City, will use the park for events and programming content to further engage the community.

“The reopening of Ferris Triangle Park brings a new revival, one filled with hope and promise that the stigma of the old park stays in history,” said Monica Shaw, Director of the Triangle Park Community Center. “Today, Ferris Triangle Park begins a new chapter of progress. Let the community take ownership and pride to create a fresh narrative for our youth, families, and seniors to cherish!”

The improvements align with the City’s broader efforts to expand and improve neighborhood parks for all Jersey City residents. Through the first allocation of Jersey City’s Open Space Trust Fund, enacted in 2016, over 20 additional park improvement projects spanning the City are underway or already completed.

“This park has seen generations of neglect but will now have the chance to empower local businesses and strengthen community bonds. The Jersey City Parks Coalition looks forward to partnering with the surrounding community and City officials for the rebirth of this park – to bring fun and energizing events to Triangle Park,” said Patrick Ambrossi, Trustee for the Jersey City Parks Coalition.

“We are excited to see the impact of the Jersey City Open Space Trust Fund, specifically in Triangle Park, where 100% of these improvements have been funded through the Open Space Trust Fund. We are proud to have been advocates for and work with Mayor Fulop and his administration to make this a reality,” he concluded.

The $500,000 in community-driven upgrades were fully funded by the Jersey City Open Space Trust Fund, and took only six months to complete.