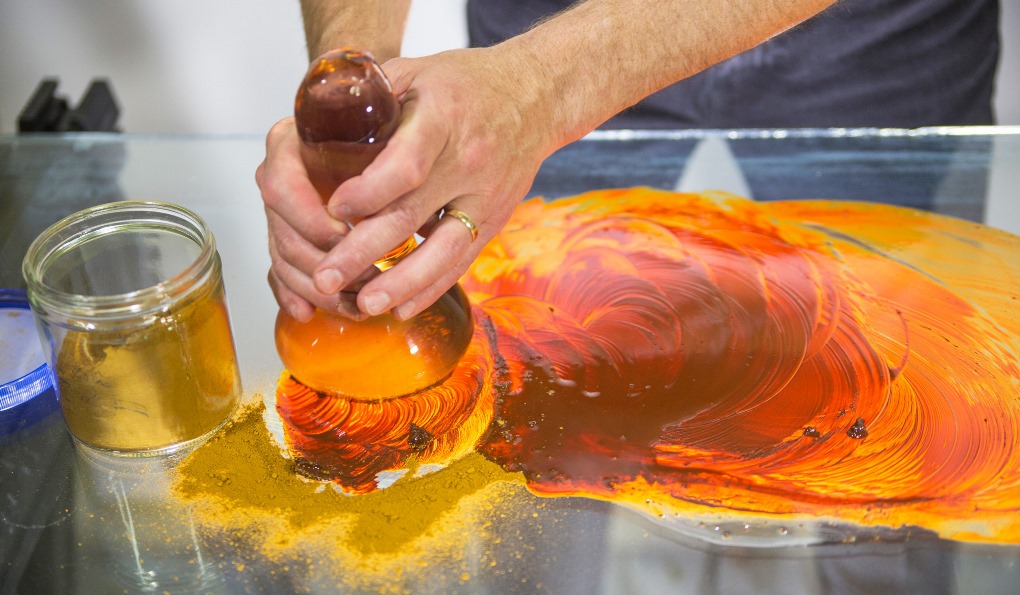 In the Appalachian region of Ohio—where abandoned mines have polluted some 1300 miles of waterways—an artistic partial solution has been created. This toxic waste is being repurposed as a valuable commodity: artists’ paint. 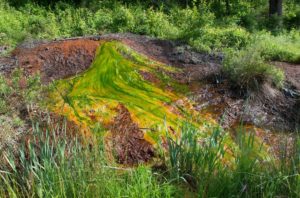 All across the United States, tens of thousands of abandoned mines mar the landscape, many of them leaking toxic minerals, metals, and acid into streams, rivers and lakes. Mining companies stripped the land of the nation’s public resources, and then declared bankruptcy in order to stick taxpayers with the bill when cleanup time arrives.

Until 1972, when the Clean Water Act took effect, no laws required mining companies to clean up their acidic, heavy metal-filled wastewater. Many mines still aren’t properly sealed, and the flow of pollution, called acid mine drainage, can’t be stopped.

This corporate welfare system was perpetuated for over a century by politicians whose campaigns were paid for by mining companies (note: in countries that are more honest about their political process, such campaign contributions are referred to as “bribes.”) [The Trump administration is currently working hard to undo many protections afforded by the Clean Water Act, which was—ironically—passed by a Republican administration. This was back when embracing “family values” meant actually protecting one’s family from harm, and wasn’t just political rhetoric. Corporate lobbyists have turned “regulations” into a dirty word these days, but we need to remember that the sole purpose of regulations is to protect society (usually from those who are against regulations).] 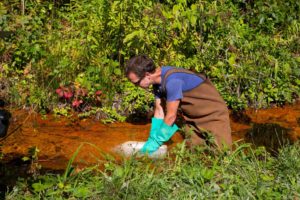 In Ohio, the non-profit group Rural Action has a Sunday Creek Watershed Group. They have been teamed with Ohio University for ten years to find treatment solutions for large acid mine drainage seeps. They’ve successfully restored seven miles of streams, but at the largest of these seeps, a new solution was needed.

Ohio University civil engineering professor Dr. Guy Reifler and art professor John Sabraw devised a plan to precipitate the iron ore from the water and turn it into paint. In partnership with Rural Action Sunday Creek Watershed Coordinator, Michelle Shively, the Sugar Bush Foundation funded the building of a pilot plant to test the technology in the Village of Corning, where rust colored water flows out into the village park stream at 1,000 gallons per minute.

In a Mmy 10, 2018 email to REVITALIZATION publisher Storm Cunningham, Debbie Phillips, Chief Executive Officer of Rural Action said “Rural Action works to develop our region’s assets in ways that help to create a sustainable local economy. This project is very exciting for us, because it has the potential to transform a problem into a solution, by fixing an ecological problem, creating the potential for local jobs, and making art. So many wins are possible here.”

Professor Sabraw bakes the precipitated iron ore to different temperatures and creates an array of yellows, oranges, reds, browns and purple, which he and other artists turn into amazing art. A Kickstarter campaign helped finance the work: it had a $30,000 goal, but raised $33,138 from 488 backers. 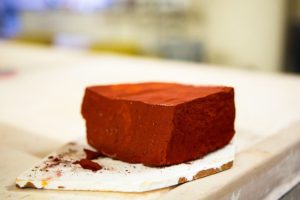 It took years of tweaking the process to make a product that could be commercially viable. In the beginning, “it was pretty much just like horrible green mud,” says Sabraw, who has been collaborating on the project with Riefler, who initially conceived of the idea. “It was not anything close to a pigment, and it was not anything close to beautiful or desirable in any way, shape, or form.”

By 2015, “we really achieved something that I felt was a viable artist pigment that would be valuable for its inherent properties, not simply because of its backstory,” Sabraw says. He was using paint made from the pigment in his own work.

Rural Action is a membership-based nonprofit working in the southeast and central eastern counties of Appalachian Ohio since 1991. Their mission is to promote social, economic, and environmental justice by training, organizing and supporting communities. Their work is about developing the region’s many assets in environmentally, socially, and economically sustainable ways. 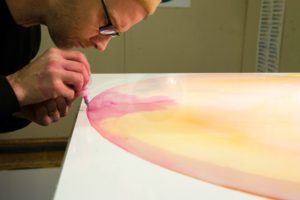 They do this by focusing on sectors identified as important by our members: food and agriculture, forestry, zero waste and recycling, environmental education, and watershed restoration. Emerging work in social enterprise development, local tourism, and energy are more recent parts of their portfolio.

Rural Action has a network of over 600 members throughout Appalachian Ohio. The organization is governed by a Board from across southeast Ohio, with strong private sector involvement. The Board oversees a CEO who manages a staff of 20 full time equivalent staff and 26 AmeriCorps members through the Corporation for National and Community Service. Rural Action members are involved as volunteers, participants, decision makers, and project designers. Their vital member base guides our sustainable development work in Appalachian Ohio through personal and civic action.

REVITALIZATION thanks Mathew Roberts, Info and Outreach Director at UpGrade Ohio for bringing this project to our attention.

All photos are courtesy of John Sabraw, except for the featured photo at the top, which is courtesy of Louise Orourke Photography.