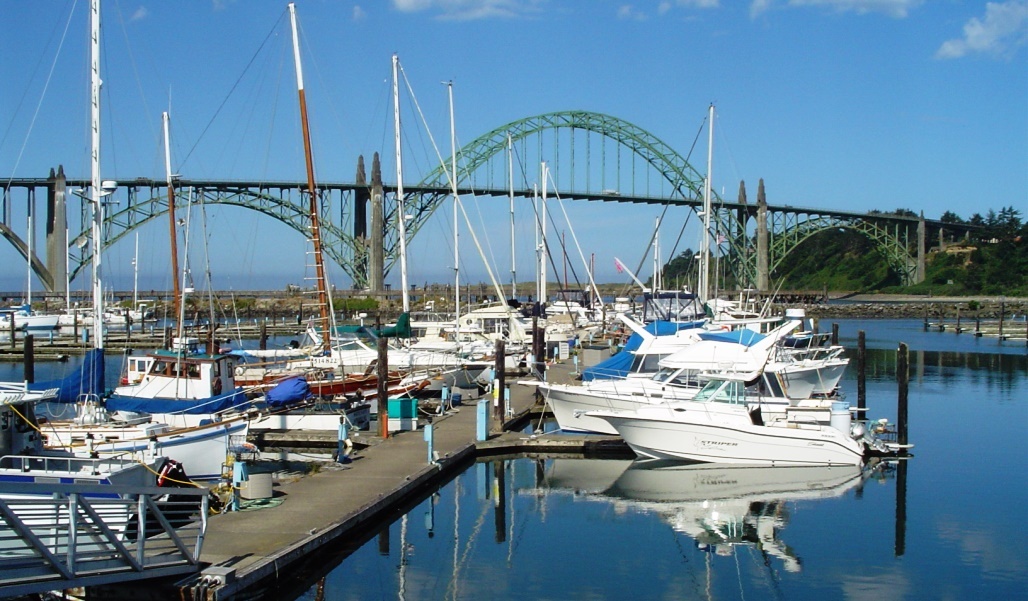 So it is good news that two projects should help the Yaquina Bay estuary thrive. One, led by Oregon’s MidCoast Watersheds Council, is at work restoring habitat on 55 acres of land along Yaquina Bay owned by The Wetlands Conservancy.

The other, spearheaded by the Oregon Coastal Management Program (OCMP), will update a nearly 40-year-old land use plan for the estuary to include research, consideration of new threats, such as updated sea-level rise maps, and input from coastal tribal nations. That project is slated to start soon. 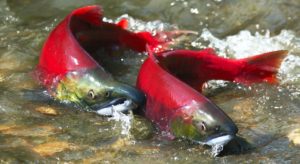 “Estuaries are, in a very real sense, the cradle of life for many coastal organisms, from shellfish to shorebirds,” according to the Oregon Coast Aquarium, which sits on the southern shore of the estuary. Wetlands and eelgrass also protect coastal communities from storms and damaging waves, and they capture and store significant amounts of carbon from the atmosphere.

However, human manipulation over the years—including building dikes and digging ditches to control water flow—has resulted in the Yaquina Bay estuary losing about 68% of its salt marsh habitat and over 85% of its tidal forested wetlands.

This degradation has severely affected Pacific Northwest salmon, which pass through estuaries as they travel from the rivers where they are born to the open ocean, and back again to spawn. Juvenile salmon use the nutrient-rich waters of wetlands, beaver ponds, side channels, and tidal marsh sloughs to rest and feed while growing large enough for life at sea.

The MidCoast Watersheds Council has been working with partners for 25 years to improve habitat conditions in the estuary. The $729,000 Yaquina Bay project is removing about 45% of a dike that restricted tidal flow and salmon access, creating 2,400 feet of new channels for fish habitat, and positioning more than 200 large logs to approximate ideal salmon habitat. The next stage includes planting native trees to help restore the tidal forest. Federal, tribal, and state governments are supporting the project with funding and technical assistance.

Underscoring the importance of such work are studies by the Oregon Department of Fish and Wildlife and the National Marine Fisheries Service.

They found that coho and Chinook salmon that spent more time as juveniles in the restored marshes of the nearby Salmon River estuary were more likely to return to spawn compared with fish without access to the same habitat. The bump in returning adults was about 20% to 35% for coho, and more than 50% for Chinook, which translates into an increase in the overall salmon population.

“When we lose tidal marshes, we lose salmon,” said Fran Recht, a habitat program manager for the Pacific States Marine Fisheries Commission who helped manage the restoration project. “When these tidal marshes are restored, we see that population return.”

Estuaries provide a bridge between the land and the sea. Restoring habitats, from riverine and forested uplands to brackish estuaries, would help several fish species recover from declines, including steelhead; eulachon, a threatened forage fish; coho, Chinook, and chum salmon; Pacific lamprey; and herring.

“We’re working toward habitat restoration at scale, from ridge tops to reefs, so to speak,” said Paul Engelmeyer, a land manager for The Wetlands Conservancy, and chair of the council. “That’s what the salmon need, that’s what forage fish like herring need, and that’s what people need, too.”

The 55 acres being restored under the MidCoast Watershed Council’s project were first identified as a priority for restoration in the 1982 estuary management plan.

That plan is under revision by the OCMP in an effort funded through the federal Coastal Zone Management Act, the 1972 law that seeks to balance conservation and development along U.S. coasts. When completed, the modernized plan will serve as a case study and provide statewide guidance for more than a dozen estuary plans awaiting an update along Oregon’s coast.

Modernizing estuary management plans is important because it can help to detail ways to better address the effects of climate change, identify local tourism and recreational opportunities, and give historically marginalized communities more of a say in the policies that govern these shared resources. The plans can therefore play a big role in fostering healthy coastal economies and equitable influence across a wide range of communities.

Pew and its partners will advocate to ensure that all stakeholders have input into the process, and that estuaries are managed for equity and for economic and environmental health.

Photo of the Port of Newport and the Yaquina Bay Bridge is by Becherka via Wikipedia.

This article was written Jennifer Browning (director) and Elizabeth Ruther (principal associate) of The Pew Charitable Trusts’ conserving marine life in the United States project. It first appeared on the Pew website. Reprinted here (with minor edits) by permission.