On May 16, 2022, Filomena Tassi, Canada‘s Minister of Public Services and Procurement, announced that Toronto-based Zeidler Architecture Inc.—in association with London, England-based David Chipperfield Architects—had been selected as the winning team in the Architectural Design Competition for the redevelopment of Block 2. 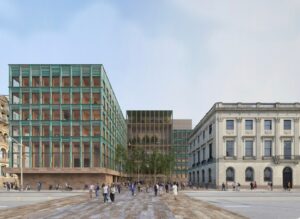 The redevelopment of Block 2 will help revitalize Canada’s Parliamentary Precinct. This work will transform a mix of functionally obsolete buildings into an innovative complex that will meet the needs of a 21st-century parliamentary democracy in a way that respects the past while also embracing the future.

“The redevelopment of Block 2 will transform this mix of aging buildings into modern, inclusive, sustainable, secure and accessible accommodations for the Parliament of Canada. I truly hope that all Canadians will be able to visit and experience the chosen design, for years to come,” said Tassi.

“Congratulations to the Block 2 design competition winner, the team consisting of Zeidler Architecture Inc. of Toronto, Canada, in association with David Chipperfield Architects of London in the United Kingdom, for their creative and innovative design. Thank you to all of the design teams that submitted extraordinary design options,” she added. 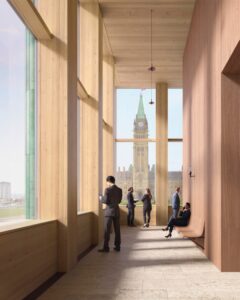 The winning design concept, chosen by an independent jury, best responded to the complex and historical considerations of the area.

Block 2 sits at the heart of Canada’s Parliamentary Precinct and brings together the past, present and future, mixing heritage-designated buildings with modern landscaped courtyards and a public square facing the Peace Tower. The design concept also demonstrates a high level of respect for and understanding of the significance of a future Indigenous Peoples’ Space, which will be located in the centre of Block 2.

The redesigned Block 2 will provide office space for the Senate and the House of Commons and will allow for the future consolidation of parliamentary accommodations, including space for the Library of Parliament. It will also include renovated retail space in the Sparks Street Mall. 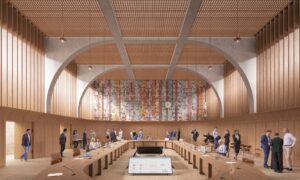 Public Services and Procurement Canada (PSPC) will now enter into negotiations with the Zeidler/Chipperfield team to establish a contract so that the design concept can be further refined in anticipation of construction beginning in 18 to 24 months.

“Competitions help to generate new ideas, drive innovation and build public interest. I’d like to thank my fellow members of the jury for their incredible insight and thoughtful deliberation throughout this design competition. The members represented a great scope of domestic and international expertise, reflecting Canada’s rich diversity and the experiences of Indigenous Peoples. I would like to extend my congratulations to the Zeidler/Chipperfield team on winning first place in this competition,” said Anthony Housefather, Parliamentary Secretary to the Minister of Public Services and Procurement and Member of the Jury for the Architectural Design Competition. 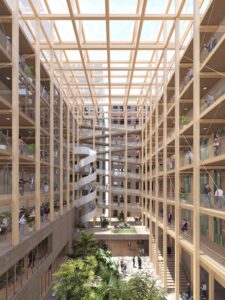 The Block 2 Architectural Design Competition was launched in spring 2021. In the fall of 2021, an independent jury evaluated 11 design concepts and ultimately shortlisted 6 competitors, who advanced to stage 2 of the competition.

The 6 competitors refined their design concepts, as part of stage 2, and presented their designs to the jury and the Canadian public through a public presentation that took place on April 11, 2022. The jury then deliberated from April 20 to 22, and provided PSPC with their official recommendation for the top 3 finalists, including the winning design.

All design teams in the competition had at least 1 Canadian component.

The Royal Architectural Institute of Canada (RAIC) oversaw the overall competition process, including the selection of the jury. John Ralston Saul served as honorary adviser to the RAIC for the Block 2 design competition.

The jury was composed of national and international design professionals, respected members of Canadian academia and civil society, as well as parliamentary representatives. 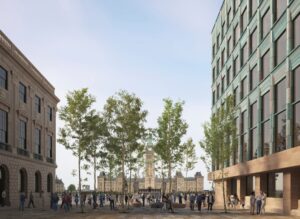 Two of the 11 buildings in Block 2, and an infill space in between, have been dedicated for the development of an Indigenous Peoples’ Space.

Architectural design competitions are among the most effective ways to achieve building excellence, attracting leading architectural firms that generate new and innovative ideas.

The Zeidler/Chipperfield team is complemented by highly specialized sub-consultants, which include heritage and Indigenous consultants, EVOQ Architecture and Two Row Architects respectively.