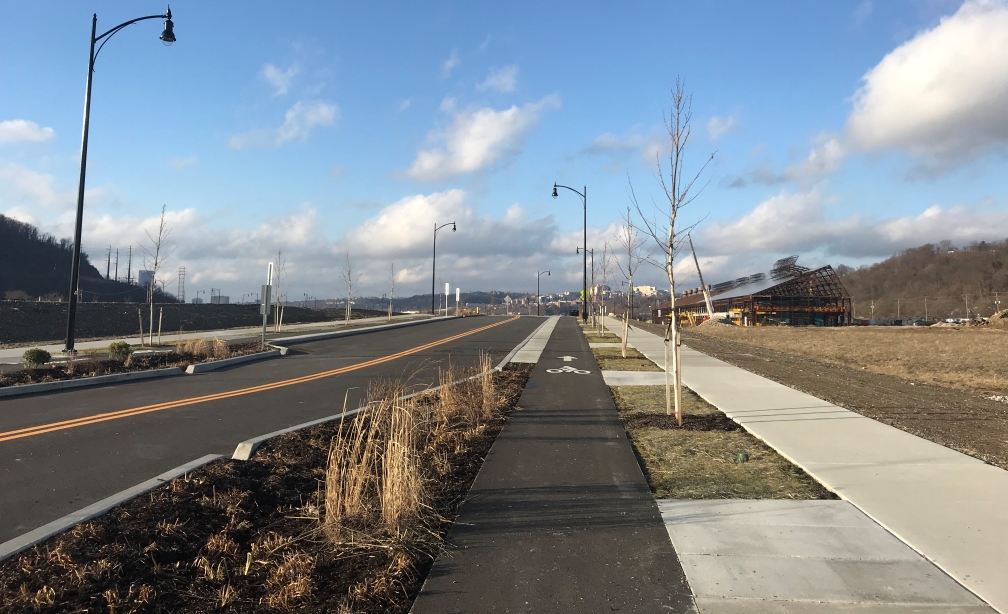 Located in the Pittsburgh, Pennsylvania’s Hazelwood neighborhood, and situated along the Monongahela River, Hazelwood Green is envisioned to become a world-class model for sustainable redevelopment. It encompasses a mix of offices, research and development, light manufacturing, housing, retail, public green spaces, trails and transportation.

With a goal of achieving USGBC LEED for Neighborhood Development Plan certification, the site’s plan for redevelopment prioritizes reuse of land in an urban infill location; seeks to create a well-connected, walkable community; and pursues efficient use of resources.

The Hazelwood Green site was once the home of Jones & Laughlin Steel Company (J&L Company) and then later, LTV Steel. During its peak, J&L employed 12,000 workers between its South Side and Hazelwood sites, with the adjacent Hazelwood neighborhood growing to reach a peak population of 13,000 residents in 1960.

The decline of Pittsburgh’s steel industry led to steel operations slowing in 1991, with the last facility closure on site in 1997. By 1998 only 6,000 residents remained in Hazelwood; today there are approximately 5,000 residents. 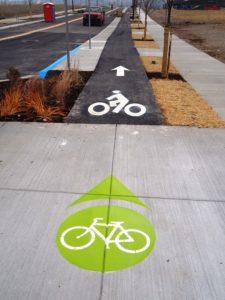 Now, on January 30, 2020, after more than a year of design and coordination with the City of Pittsburgh, Lytle, Beehive and Eliza Streets—Pittsburgh’s first “complete streets”—opened at Hazelwood Green, setting a new standard for Pittsburgh street design that prioritizes people and safety over automobiles.

Lytle and Beehive Streets employ numerous street design firsts for Pittsburgh: protected sidewalk-level bicycle lanes, a shifting center line (chicane) with alternating on-street parking, raised intersections, floating bus islands, and an emphasis on green infrastructure and landscaping. These street design guidelines and traffic calming tools are being increasingly deployed in cities across the country, including Boston, Seattle, Minneapolis and Austin, and have been in use in Denmark and the Netherlands for decades.

The new streets are designed for a target speed of 20 miles per an hour. Rather than relying on drivers to voluntarily maintain the speed limit, the street’s design – chicanes, narrow travel lanes and raised, textured crosswalks – prevent and discourage drivers from speeding.

“By encouraging and prioritizing multi-modal transportation, this design aligns with the vision established for Hazelwood Green in its Preliminary Land Development Plan (PLDP) and its objective to meet climate, equity and health goals,” said Rebecca Flora, ReMake Group President and outgoing Almono director for the project.

As part of an overall TDM (transportation demand management) and monitoring effort, two permanent bicycle and pedestrian counters – Eco-Counters – were also installed to count movement and direction and inform future mobility investments and strategies. Counts can be monitored at http://www.eco-public.com/ParcPublic/?id=4600.

“Hazelwood Green has set a new standard for how bicycle and pedestrian infrastructure should be built in the city,” says Scott Bricker, BikePGH Executive Director. “Getting these streets right from the get-go means people of all ages and abilities can comfortably and safely choose to get around on foot and bicycle, keeping more cars off the streets and freeing up valuable space for people.”

“The City of Pittsburgh’s mobility team worked closely with the Hazelwood Green project team over the past three years to balance progressive design solutions with practical maintenance and safety requirements,” says Karina Ricks, Director, Pittsburgh Department of Mobility and Infrastructure (DOMI). “We are pleased to accept this brand new “City” street that will serve as a model for future development projects.”