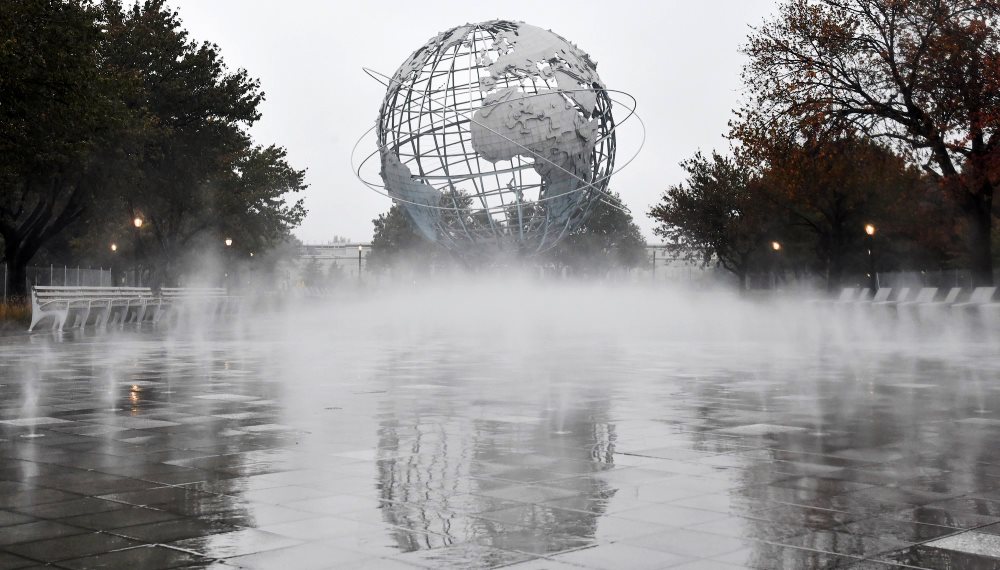 In New York City, Flushing Meadows Corona Park is home to Queen’s beloved symbol, The Unisphere. It features representations of the continents and celebrates the World’s Fairs theme of “Peace Through Understanding.”

As the site of two World’s Fairs, Flushing Meadows Corona Park has become a recreational escape for the residents of New York City and visitors from around the world.

The park draws over three million visitors from all over the world for both spectator and recreational activities. The park’s international flavor draws from the area’s diverse neighborhoods, making its revitalization of widespread importance.

“The Fountain of the Fairs is an iconic symbol of the 1964 World’s Fair that keeps us connected to our city’s rich history,” said Commissioner Silver.

“We’re thrilled to restore vibrancy to this historic site for the enjoyment of New Yorkers and visitors. Thanks to Mayor de Blasio’s investment, the revitalized Fountain of the Fairs will continue to serve as a symbol of Queens and place for peaceful respite for generations to come,” he added.

Funded by Mayor Bill de Blasio, the $6.8 million project transformed the Reflecting Pool into an interactive mist garden. Specialized jets were installed to create a cooling cloud that will refresh visitors on summer days.

“These iconic fountains are known throughout the world as a hallmark of the borough of Queens, and a wonderful attraction where residents can cool off and have fun in the summer,” said City Council Member Koo. “Investing in our parks is intrinsically tied to the health and well-being of our communities, and I’m very happy to see this significant investment fulfilled right here in Flushing Meadows Corona Park.”

Responsive to community input, the pool retains its 1964 imprint with the original design and dimensions.

“Grateful for the collective commitment to supporting and beautifying spaces like the Fountain of the Fairs, one of the staples of Queens,” said Council Member Moya.

“Flushing Meadows-Corona Park is a place where people from diverse communities from here and around the world gather with family, play soccer, enjoy nature, or meet their life partner like my parents did. Now visitors will count with a restored Fountain of the Fairs as part of their instagrammable experiences in New York City,” he concluded.

Designed for the 1964 World’s Fair, the Fountain of the Fairs connects the Unisphere to the Fountain of the Planets. In 2000, the fountain was restored to life after decades of inactivity, but later fell into despair after sustaining flooding damage from Superstorm Sandy.