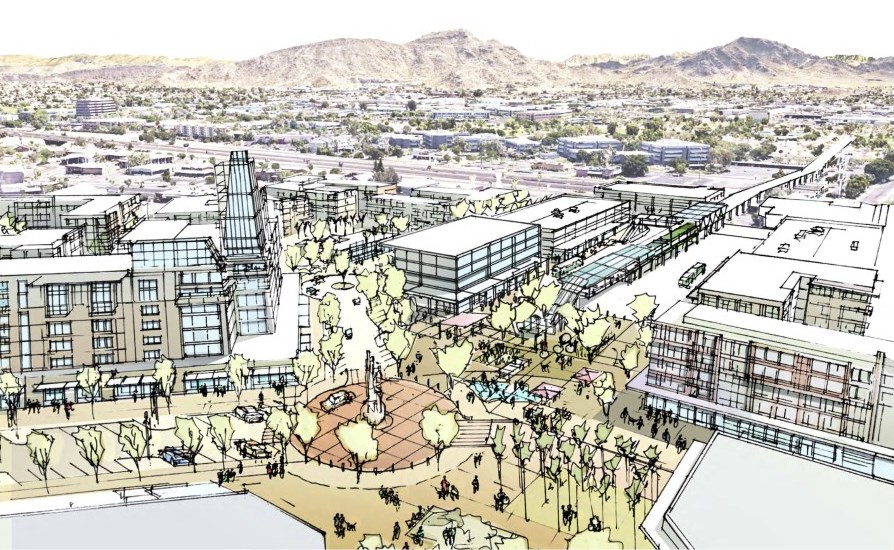 One of Phoenix’s most iconic commercial properties is about to become the largest mall redevelopment project in Arizona history, transforming into hwta local leaders hope will be a vibrant new addition to help revitalize the sprawling city’s long-neglected core.

Concord Wilshire Capital (CWC) and TLG Investment Partners (TLGIP) (which are collectively the developer) announced on December 9, 2021 that they have contracted to acquire the huge Metrocenter Mall, and plan to invest approximately $750 million to redevelop the property into a residential and mixed-use community.

The developer has formed a strategic alliance with Hines, the international real estate firm, to redevelop and repurpose the Metrocenter Mall into a community-driven walkable village that will be home to a variety of residential apartments, curated boutiques, popular retail stores, restaurants, bars, a town-center park, and other commercial and entertainment venues (to be known as the Village). 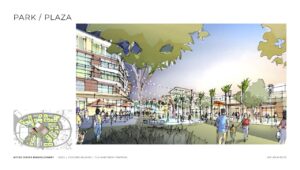 The Village will be situated on approximately 68 acres of prime land in a qualified Opportunity Zone. The plans for the Village include over 2,600 multifamily units, 100,000 square feet of essential and service retail. Total construction costs are expected to be over $750 million.

The Village will be designed as a self-contained community encompassing the city’s new Light Rail Station that is currently under construction within the Village. The City of Phoenix is investing approximately $150 million to build this Light Rail Station.

The Light Rail Station is scheduled to be delivered in 2024 as part of the Northwest Extension. The Light Rail Station will serve as one of the major focal points of the Village and will provide direct connectivity to Downtown Phoenix, the Phoenix Sky Harbor International Airport, ASU, and communities to the east.

“This is an enormous economic boost to the entire west side of Phoenix,” said Mayor Kate Gallego. “The connectivity provided by the light rail extension means easy access to shopping, entertainment, housing, and – perhaps most importantly – to jobs. In addition to the many construction jobs created by this redevelopment, there will be opportunities available to work in the businesses that will take root and grow in the Village. I am excited, optimistic, and thrilled that Concord Wilshire is investing in the future of Phoenix.”

Residents and visitors of the Village will be able to enjoy an array of anticipated amenities, including pet-friendly parks and greenspace, an amphitheater, pedestrian and bicycle pathways, a walkable retail promenade, shops, restaurants and immersive water features.

On June 28, 2021, CWC signed a contract with Carlyle Development Group of New York, the Mall owner, to acquire the Metrocenter Mall, and the inspection period has been successfully completed. The transaction is scheduled to close in the second half of 2022. The Company has reached an agreement with Carlyle to demolish the mall ahead of closing.

“We worked very hard to obtain approval for a flexible PUD that allows a high density residential and mix-use development in the metro Phoenix market. We are excited and proud that the Developer and the City of Phoenix are incorporating our vision into the redevelopment of this iconic location,” said Abdi Mahamedi, President of Carlyle Development Group.

The Village will also be designed to integrate with and complement certain existing amenities and venues within the Metrocenter Mall through its partially shaded internal pathways and roads. The existing amenities and shops include a 150,000 square foot Walmart Supercenter, a public library, the Arizona Canal with its own pedestrian and bicycle pathways, the Rose Mofford Park (which provides free afternoon activities for children and teenagers), a theme-park, and a cinema.

“We are excited to be a part of the redevelopment of the former Metrocenter Mall into a vibrant mixed-use community with a sense of place that will enhance the public investments,” said Chris Anderson, Senior Managing Director of Hines.

The Village will also provide approximately 4,100 parking spaces programmed in up to 7 garage decks conveniently located for use by the community, residents of the Village, visitors, and for the Light Rail Station Park-and-Ride users.

“Good things come to those who wait, and now, the spotlight will shine on our beloved Metrocenter once again, thanks to Phoenix’s new partner in economic development, Concord Wilshire Capital. I am excited to collaborate and transform Metrocenter into a vital hub of social gatherings, cultural diversity and economic growth,” said Councilwoman Ann O’Brien of Phoenix District 1, where Metrocenter is located. “I am grateful for all the hard work that went into making this exciting partnership happen.”

The Developer has also reached preliminary terms with the City of Phoenix, subject to City Council approval, for a public private partnership for public improvements, by and through a to-be-formed Community Facilities District (CFD), for the Village. The public improvements are planned to be funded through CFD assessment bonds and will be primarily for the construction of public parking garages.

“We are proud to be working with the City of Phoenix again. The proposed redevelopment of the Metrocenter Mall property will be another substantial project to further the city’s redevelopment and revitalization plan for the North Mountain Redevelopment Area,” said Nate Sirang, President of Concord Wilshire Capital.

“This redevelopment of such a memorable mall and destination for area residents reflects our continued commitment to the Phoenix market. We are excited to create a first-class destination for local families, while contributing meaningfully to the community and its economy and safety,” he concluded.

In 2016, Carlyle led the rezoning of the Metrocenter Mall and the surrounding parcels and obtained the City Council Approval for a Planned Unit Development (“PUD”) designation, as well as lobbying for the relocation of the Light Rail Station into the Metrocenter Mall, paving the way for a successful future mixed-use development.