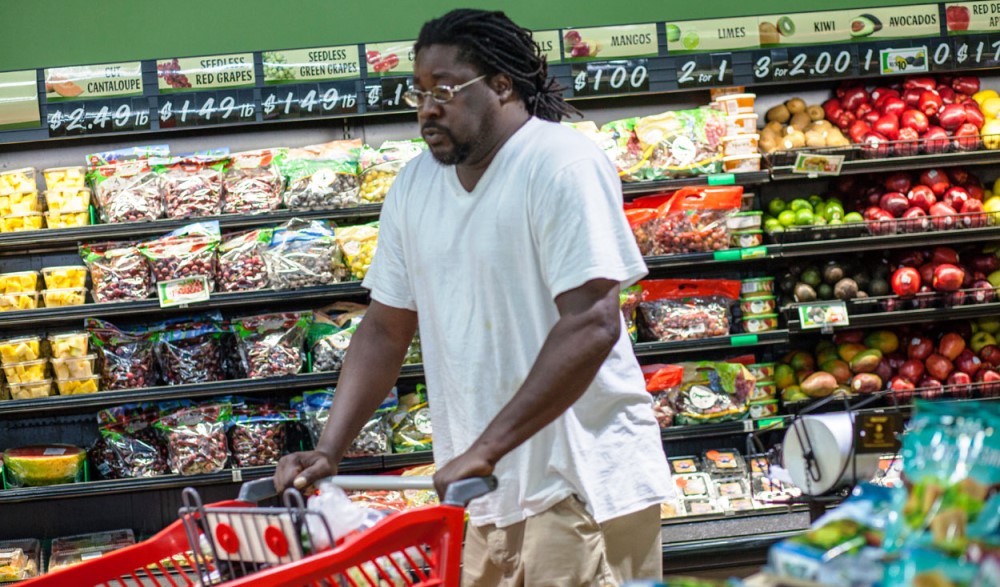 The grocery business is more competitive than ever. Even in normal times, much of the market share is taken up by the big-box players. But in the face of an unprecedented pandemic, local, independent grocers are focusing more deliberately on serving their communities, going out of their way to provide the goods that customers that they often know by name need.

These grocers continue to fill an important niche in the landscape, often serving communities that do not see much investment from national chains with top-notch customer service and a focus on community development and local food. 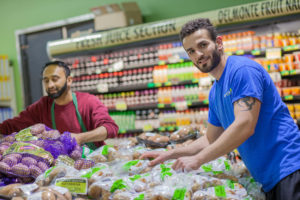 For generations, systemic racism has kept many people of color from achieving even a basic standard of living, which includes social services that help communities thrive. The effects of COVID-19 and historical racism on access to quality health care, inclusive food systems, and education for people of color has led to lower life expectancies and many other negative outcomes.

Access to healthy food can be sparse in communities with low incomes and particularly in communities of color. Lack of access to healthy, fresh foods has been a driver for chronic diseases like diabetes and cardiovascular disease in communities of color, and the same is true for COVID-19. Not coincidentally, during the pandemic, health officials have stated that a diet full of healthy, nutrient-dense foods can help people recover more quickly from COVID-19 and other illnesses.

Capital Impact Partners has a long history of supporting good food entrepreneurs, particularly those that focus on communities of color and communities experiencing poverty, whose missions and structures often fall outside of what traditional banks are looking to finance. One example of this includes the Michigan Good Food Fund (MGFF), which Capital Impact administers.

It’s a $30 million public-private partnership loan fund that provides financing and technical assistance to good food enterprises working to increase access to affordable, healthy food in low-income and underserved communities in Michigan. This includes the range of businesses that grow, process, distribute, and sell healthy food that reaches those who need it most. The MGFF collaborative includes six lenders and two technical assistance providers.

We caught up with three Michigan-based, independent grocers that Capital Impact Partners has worked with to see how they are centering the needs of their communities and continuing to foster inclusive food systems during the pandemic.

What we learned is that each of these grocers share a common thread that uniquely positions them to support communities in times of crisis and illustrates why we support them. This includes:

As the pandemic continues and individuals, families, and communities work to build economic resilience, the benefits that independent community grocers provide will be a grounding strength for community members. 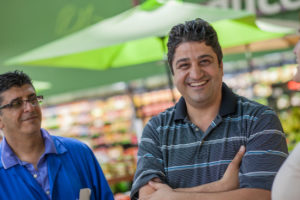 Sam Shina is no stranger to meeting the needs of the local community.

His independent grocery store, Imperial Fresh Market, has met the requirements of its diverse community in Detroit for nearly 25 years, in an area where there are fewer local options for food shopping than in surrounding suburbs. You can read more about Sam and Imperial Fresh Market here.

So when the pandemic hit, Shina found himself engaging his community shoppers and employees around a whole new set of needs. Working to keep produce fresh and stocked, employees and customers safe, and prices in check became his main focus.

At the end of March, Shina took on the costs of retrofitting his store and installed plexiglass on the registers; required employees to wear masks and gloves; and increased sanitation of registers, doors, and grocery carts. He lost a lot of staff early on, many of whom were fearful of working and were able to receive stimulus funds.

These days, he’s working with a smaller team and battling the price increases that have inevitably come with a supply chain in the throes of a pandemic, as well as managing the cost of retrofits. Understandably, some customers have been upset.

“It gets to a point where people get frustrated that they’re spending more money on food,” Shina said. “When you’re in a situation and don’t know what’s going to happen the next day, you get vulnerable. You don’t know how to react.”

But overall, Shina said, customers are appreciative that they have access to a 40,000-square foot, full-service grocery in their neighborhood, especially in the midst of the pandemic. The location of the store means that they do not have to travel as far for goods, and that means less exposure to the virus. They have accepted that sometimes not having the exact item in stock is a fair trade for not having to travel out to the suburbs to shop at big-box stores, which tend to get priority distribution.

“We’re still struggling,” Shina said. “I’m going to stop carrying certain lines that are not beneficial for me in today’s world. Sometimes you’re only going to get a certain flavor of a certain kind.”

These days, Shina said his inventory is about 80 percent stable, and revenue is returning to normal levels. It is still a challenge in a city like Detroit, where the population has declined over the past 25 years that Imperial has been in the neighborhood. But Shina and his family are committed to the community. They decided in 2015 to renovate and double in size. Capital Impact Partners helped them finance that $6 million expansion. 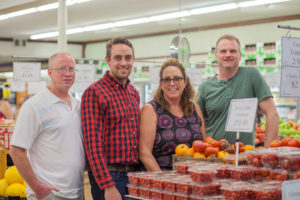 Owners of Ken’s Fruit Market in their store. Meeting community need, Ken’s was able to open a second location.

Ken and Gina Courts started small when they opened their independent grocery store with a 7,000-square-foot building in the Grand Rapids’ neighborhood of Alger Heights.

“We basically started with $25,000 worth of inventory, and mainly focused on fresh fruits and vegetables,” Gina Courts recalled.

Soon after, in 2012, they opened a second location a few miles away.

During their start-up phase, the Courts had amassed a complicated stack of personal and bank loans at high interest rates. 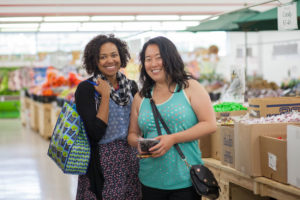 Two women smile in Ken’s Fruit Market. Supplying quality food to a community is a valued commodity, one that can determine health, educational, and other outcomes for individuals and families.

The financing allowed the Courts to reduce their costs and focus on investing and growing their business.

In the pandemic’s early days, the Courts battled challenges on all fronts — a shortage of hand sanitizer and personal protective equipment (PPE) for staff, staff shortages when some workers were scared to return to work and preferred to file for unemployment, difficulty keeping shelves stocked while navigating shortages, rising prices, an ever-shifting distribution landscape, and navigating the mask issue with customers.

But it is worth it to remain in business and continue their mission of serving a clientele of varied income levels with fresh, locally sourced groceries, Courts said.

“Once in a while you get a customer that’ll send you a letter in the mail or come up to you and say they really appreciate everything that you’re doing to keep going in this pandemic,” she said. “That is the thing you have to look at, to keep you going.”

When Steve Hernandez and partner Michelle Jones laid eyes on the historic Woolworth’s building in downtown Port Huron, they knew it was special, even if they were not 100 percent sure what the building’s future held.

Then they started talking to the community.

Indeed, the only places to buy food in the immediate vicinity of downtown included two dollar stores and a party store.

But the partners ran into challenges when they sought financing to rehab the old building, investors who, Hernandez said, had trouble seeing their vision.

“The common theme was that we don’t have a big parking lot for our customers to park in,” said Hernandez. “And we tried to explain that this is a small town — there’s parking in and around this area.”

The location is also accessible to public transportation, making it attractive to those who rely on the bus to get around town.

So Hernandez and Jones bought Country Style Market, a grocery store in Fort Gratiot, just 4 miles north of the downtown property. The market was known for its high-quality meats. After working to increase profitability, they turned it into a thriving business, and they are ready to expand into a second location in downtown Port Huron, where they believe it will serve a wider community and cater to a mix of incomes.

Hernandez turned to Capital Impact Partners for help in financing the project.

Having bought the 20,000-sq-ft historic building, Capital Impact supported Jones and Hernandez with a $3.4 million construction loan to create a 12,000-sq-ft space for the second Country Style Market grocery store.

Hernandez and Jones are in the process of rehabbing the building. They are excited to open “just in time” for an expected resurgence in downtown Port Huron, featuring new condominiums and boutique hotels coming on top of the 2018 expansion of McLaren Hospital.

Hernandez said that small independent grocers have an advantage in uncertain times.

“We can turn on a dime,” he said. “We were able to pivot and move strategically to follow the guidance of the health department, cut hours to stay clean, and reduce stress on employees.”

And being small and focused on quality means that building strong customer relationships comes perhaps a bit easier than it does for the big-boxes, Hernandez added. When times were a little tough in the pandemic, Hernandez and Jones went out of their way to go pick up the meat from their wholesale suppliers and bring it back to the grocery store, to make sure it was there when customers needed it.

“We have numerous customers come in and tell us that they prefer to shop in a small grocery store like ours,” he said. “We are always friendly, nobody’s pushing or taking stuff out of your cart. And we work hard to stay that way.”

All photos courtesy of the Michigan Good Food Fund.

This article by Mary Donnell, Program Manager of the Michigan Good Food Fund, originally appeared on the website of Capital Impact Partners. Reprinted here (with minor edits) by permission.