The 5-year restoration of the 500-year-old Koyunbaba Bridge on the historic Silk Road in Turkey‘s central Çorum province is now been substantially completed.

This stone arch bridge spans the Kızılırmak River. It was built between 1485 and 1489 at the demand of Sultan Bayezid II, who wanted to revitalize the local economy by boosting camel caravan traffic in the region. The bridge is named after the 15th-century Turkish Sufi poet Seyyid Ali, whose nickname was Koyunbaba. 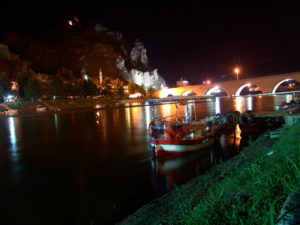 The bridge is one of the few structures in the area to have survived for five centuries.

The 15-arched bridge is one of the largest historic bridges in Anatolia, measuring some 250 meters long, 25 meters high and 7 meters wide.

Over time, eight of the arches had been buried by buildup of sediment from the river.

Not surprisingly, given its age, this isn’t the bridge’s first restoration. Back in the 1960s, the original ashlar pavement was replaced with 32 cm (13 in)-thick concrete and covered with asphalt.

In the 1980s, the facades of the bridge were plastered with compounded mortar and slurry was used in the mortar joints. 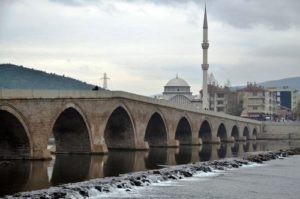 The bridge restored. Photo courtesy of the seventh Regional Directorate of Highways.

Over time, the mortar on the facades crumbled. This latest restoration work aiming to reinstate its original state began in July 2014, and continued until 2017.

After removal of the mortar on the facades in the first instance, the bridge was closed to motor traffic and pedestrians for further restoration work in November 2015.

Osmancık Mayor Hamza Karataş is pleased with the historical accuracy of the restoration, saying “All stages of the project are being examined in detail.”

He noted that the bridge—which is the symbol of the entire district—was restored as close as possible to the original version, undoing some badly-engineered earlier renovations.

Featured photo of the bridge prior to restoration is by Yusuf Fatih KARACİRAK via Wiikipedia.