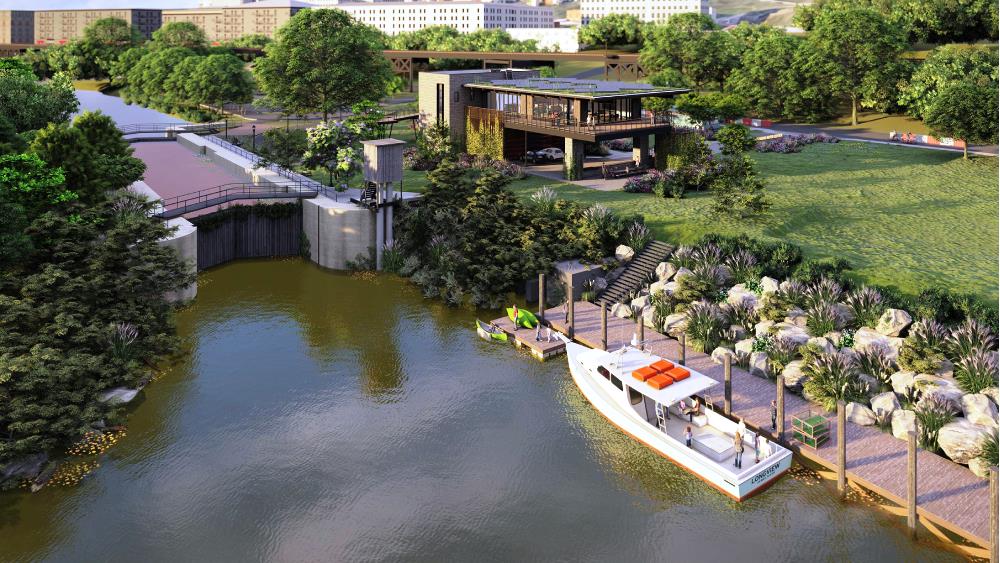 On August 10, 2021, The Conservation Fund announced its purchase of the 5.2-acre Dock Street property on the James River in downtown Richmond, Virginia.

The Conservation Fund—together with the Capital Region Land Conservancy (CRLC) and the James River Association (JRA)—celebrated both this acquisition, and JRA’s future plans to build an environmental education center on a portion of the land. This is part of a strategic effort between the three partners and the City of Richmond to protect the property in perpetuity for the public.

“The ability to help our partners purchase and secure key properties like this one quickly and effectively is what The Conservation Fund was built for,” said Heather Richards, Mid-Atlantic Regional Director at the Fund. “Increasing access to the James River and making trail connections for urban centers has never been more important for Virginia’s environmental health and community and economic vitality.”

The effort will have various benefits to the Richmond community including adding new public access to the riverfront, enhancing the Virginia Capital Trail and youth education programs, and safeguarding the historic “View That Named Richmond.” 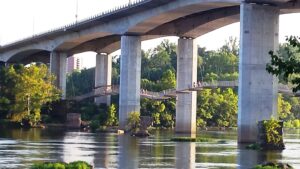 Belle Island Pedestrian Bridge (built in 1991) is a brilliant example of repurposing space under a freeway that normally would have been wasted. Fuzzy photo (sorry) by Storm Cunningham.

Conservation easements will be placed on the land to prevent future commercial development of the site and ensure public ownership of the riverfront from Rocketts Landing to Browns Island and the Belle Isle pedestrian bridge.

“Permanently conserving this scenic and historic riverfront area is the intentional result of tremendously successful collaborative efforts and undertakings by the dedicated individuals, organizations, and entities involved,” says The Honorable Cynthia I. Newbille, President, Richmond City Council, Councilmember, Richmond East End 7th Voter District. “This work and the plans slated for this area are transformational in nature and will continue to strengthen the beauty, enjoyment, and value of our natural river asset for all Richmond residents and visitors in helping to make our city an even better, more equitable, and more beautiful place to live, love, work, learn, play, visit, enjoy, and raise a family.”

They will also protect water quality for more than 2.6 million people who live in the 10,000-square-mile James River watershed, as well as help restore wildlife like the Atlantic sturgeon.

The CRLC entered into a contract for the historic Dock Street property last year. The contract was then assigned to The Conservation Fund for temporary ownership while the partners raise funding to complete the transaction.

In the near future, JRA will purchase approximately one acre of the land from The Conservation Fund to establish a new river center for environmental education. The program will focus on connecting Richmond youth with river-based, hands-on learning experiences while inspiring confidence, ecological understanding, nature appreciation, and conservation action.

“Our goal is to ensure that every child growing up in ‘America’s Best River Town’ is introduced to the James River and enjoys a lifetime of benefits that the river can provide,” said Bill Street, JRA’s Chief Executive Officer. “Building a leading-edge education center on Richmond’s riverfront will expand our ability to engage local youth, particularly in the historically underserved East End.” 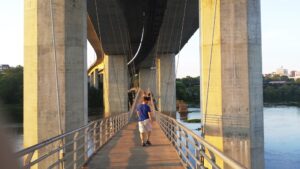 “The James River Center represents a great opportunity for Richmond Public Schools students to take part in meaningful environmental science education that focuses on the issues and resources within their city,” said Josh Bearman, Science Curriculum and Instructional Specialist with Richmond Public Schools. “Its presence so close to downtown will greatly increase the possibility of access to high impact field experiences on the river, a crucial piece of RPS Science’s goals for place-based learning.”

The rest of the 5.2 acres will be transferred to the City of Richmond to become part of the James River Park System, where it’ll be opened for public riverfront recreation and secure a critical link of the Virginia Capital Trail; a 51.2-mile trail that connects Richmond to Williamsburg. This effort will allow the trail to be moved entirely off city streets and onto waterfront parkland.

“I applaud The Conservation Fund, Capital Region Land Conservancy, and James River Association for working together to expand the James River Park System with the purchase of 5.2 acres of riverfront property,” said City of Richmond Mayor Levar Stoney. “This significant acquisition, and plans for the James River Center, will benefit Richmonders for generations to come.”

The CRLC played an essential role in securing a contract with the private seller to make this effort a reality. They will coordinate with the City of Richmond and James River Association to conduct community engagement to envision uses of the future public open space and park, as well as continuing to work with all parties to secure the remaining funding needed to fully open this property to the public and permanently protect this critical riverfront.

“As Richmond’s local land trust having played a critical role in the permanent protection of the James River Park System more than a decade ago, CRLC is honored to continue its efforts to make more places available for the public to enjoy and implement important components of community support plans such as the Riverfront Plan and Richmond 300 Master Plan,” said Parker C. Agelasto, CRLC’s Executive Director.

Grants for this project have been awarded for the City’s future acquisition from Virginia’s portion of the Land and Water Conservation Fund and the Virginia Land Conservation Foundation, which have a match component and requires an immediate need for private donations. JRA’s river center is part of its $20 million James Changer Campaign.

Featured photo of the Dock Street property courtesy of the James River Association.