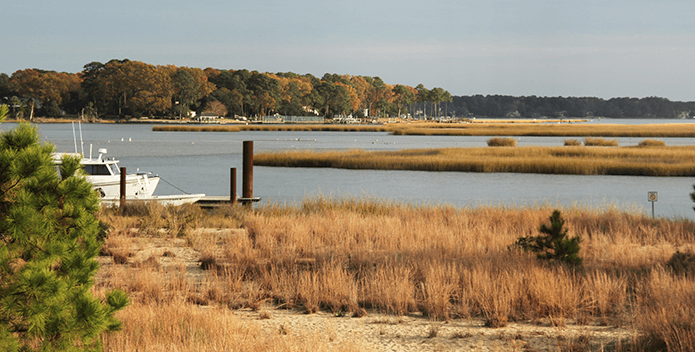 On May 18, 2022, the second phase of a large-scale hard reef habitat restoration project funded by the Norfolk District, U.S. Army Corps of Engineers (USACE) and the City of Virginia Beach, Virginia made progress at a public meeting in the Brock Environmental Center in Virginia Beach.

Along with oyster reefs, the aim of the Lynnhaven River Basin Ecosystem Restoration Project is enhancing the river’s already enormous ecological, cultural, economic, historic and recreational impact on residents, tourists and the nearly 18 million people in the U.S. impacted by the Chesapeake Bay. 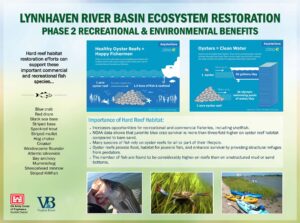 The meeting showcased plans and specs for the next phase of the previously-controversial oyster and fish reef restoration, aimed at improving the historic abundance and quality of the Lynnhaven River.

Alongside representatives from the Norfolk District and City, subject experts from the environmental advocacy groups Chesapeake Bay Foundation (CBF) and Lynnhaven River Now answered questions during the informal, open-house format.

According to Heather Lockwood, USACE’s Norfolk District project manager, “The construction is anticipated to begin in late spring or early summer of 2023.” She noted that while construction is estimated to take approximately 90 days, it could take longer depending on weather delays or other unforeseen elements.

The second phase of reef restoration is part of a unique multipart, multiphase project to improve both Virginia Beach and the country’s most vital estuary.

The initial reef restoration phase caused trepidation from waterside property owners and boaters, so during this public meeting, impacts to recreation were a topic of conversation. In the reply to a recent public query on the matter, project personnel stated the following:

“There will be no anticipated impacts to recreation. All recreational activities in Broad Bay (boating, swimming, tubing, kayaking, fishing, etc.) will continue as was able before the project would be implemented. The placement of the reef in Broad Bay will provide additional oyster, fish, and crab habitat therefore, improving both recreational and commercial fishing opportunities. At low tide (Mean Low Water) the clearance above the reef (from surface of water to surface of reef) ranges from 3.6’-7’ depending on the location within the site. The proposed reef designs will place substrate in 50’ rows with 80’ spacing in between the rows, and the reef substrate has a target height of 14” off the bottom.”

The project is also forging ahead with second phases in its wetlands and submerged aquatic vegetation renewal.

Executive Order 13508 (Chesapeake Bay Protection and Restoration) and the 2014 Chesapeake Bay Agreement proclaim the Lynnhaven River is a “Priority” tributary and has been identified as one of 10 tributaries to be restored by the year 2025.

One goal of the agreement is to combat climate change by increasing the resiliency of the bay and tributaries to withstand changing weather and its impacts.

This goal falls in line with the Army’s first Climate Strategy, released earlier this year, which recognize climate change as a threat to both national security and the well-being of the American people.