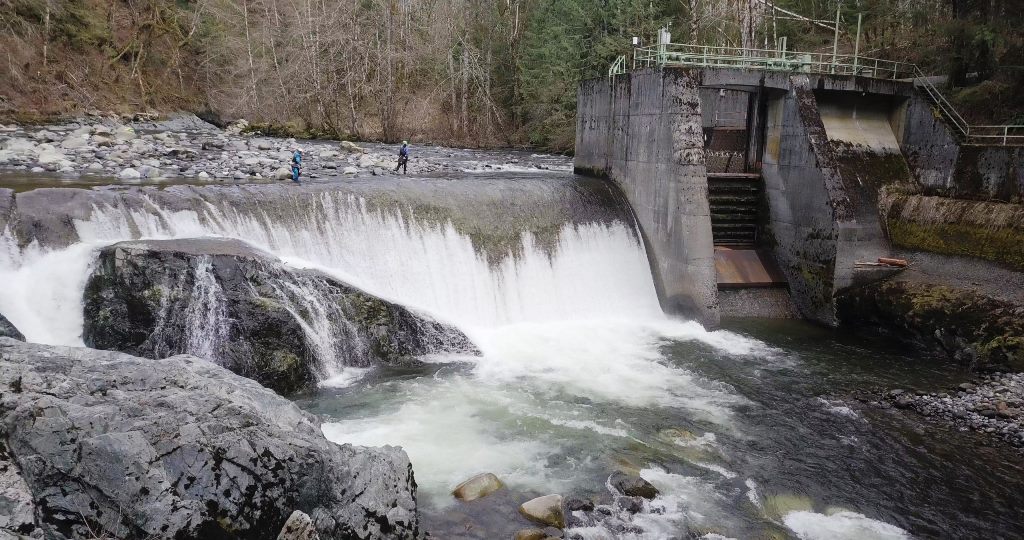 “Removing the Middle Fork Nooksack Dam will restore miles of pristine habitat for fish and illustrates the type of collaborative projects essential to salmon recovery in the Pacific Northwest. We hope that this public private partnership inspires future work that benefits people, salmon and orcas,” said Anji Moraes on behalf of the Paul G. Allen Family Foundation.

The initial demolition blast.(link to video at end of article)

“Nooksack is a historical tribe in this watershed,” said George Swanaset Jr., Nooksack Tribe’s natural and cultural resources director. “Work began many years ago with Nooksack tribal members Peter Joseph, George Swanaset Sr., Paul Costello and Nooksack Cultural Committee, and is still ongoing. The diversion dam is located in the boundaries of an area nominated as Traditional Cultural Property with the National Register of Historical Places.”

Crews have been working for months to prepare the site, including extensive precautions to avoid the spread of COVID-19. The dam will be demolished in July and restoration of the river channel will take place in August. When in-water work is completed in September, the river will flow freely for the first time in more than 50 years.

“Healthy rivers are vital to life, and when we remove a dam and let a river flow freely, people, fish and wildlife, and the economy can all benefit,” said April McEwen, associate director of American Rivers’ River Restoration Program and project manager.

The project showcases how communities can work together to restore and care for vital resources while maintaining water supply.

“The Middle Fork Dam was constructed as an essential piece to our drinking water infrastructure but we have known for over a decade that we needed a creative solution to restore access to this pristine fish habitat,” said Renee LaCroix, assistant director for City of Bellingham Public Works. “Fish are an invaluable cultural and ecological resource in the Pacific Northwest and we are grateful for the community relationships that made this long-term vision a reality.”

“It is possible to create a more sustainable future by restoring a free-flowing river to provide critical habitat for threatened species and to meet the needs of communities,” said McEwen. “We hope this example of tremendous collaboration and innovation can inform and inspire other river restoration efforts in the region and nationwide.”

Removing the Middle Fork Nooksack Dam will restore access to 16 miles of cold, pristine spawning and rearing habitat in the upper Middle Fork Nooksack River for threatened spring Chinook salmon, steelhead and bull trout. Project elements include moving the point of water diversion upstream to eliminate the need for the dam while maintaining water supply; removing the dam and restoring the channel to reconnect habitat; and installing fish screens to prevent entrainment into the water supply diversion.

“The habitat in the Nooksack basin will take decades to recover because there are many limiting factors that impact Endangered Species Act listed (ESA) early Chinook,” added Merle Jefferson, director of Lummi Natural Resources. “The habitat above the Middle Fork has potential and we hope that this project will provide more spawning habitat for the salmon, which are integral to our heritage and cultural identity.”

“The State and tribal co-manager hatchery programs will provide the necessary adult salmon spawners to seed the new habitat. These hatchery programs are critical to preserving the ESA species while habitat recovers. We will be working together to monitor the effects of the dam removal and hope that the project produces the fish returns we are looking for,” Jefferson continued.

Fish passage at the dam was recognized as the top priority action to increase spring Chinook in the Water Resources Inventory Area 1 Salmon Recovery Plan. In the 2019-2021 state biennium, the project was ranked the top priority for funding by the Puget Sound Acquisition and Restoration program and subsequently funded in the state capital budget.

Additional benefits include restoration of culturally significant resources for the Nooksack Indian Tribe and Lummi Nation, increased resiliency of Bellingham’s municipal water supply and removal of a safety hazard for whitewater kayakers.

The Middle Fork Nooksack River Dam was built to supplement the City of Bellingham’s water supply in 1961. Though state law at the time required fish passage, dam construction was permitted without the inclusion of passage.

“We want to see the salmon return and continue protecting a resource that has always been there for our people,” explained Trevor Delgado, Nooksack tribal historic preservation officer. “The Middle Fork dam removal project is a representation of decades of work and provides an opportunity to work together collaboratively to protect an area that is deeply rooted to our culture. What the Middle Fork means for our people today, we want it to mean the same for future generations. We want to continue to pass on the bridge from our ancestors into the future.”

The Nooksack Indian Tribe has advocated for dam removal for decades. In 2002, the WRIA 1 fishery co-managers, the Nooksack Indian Tribe, Lummi Nation, and Washington Department of Fish and Wildlife, signed a memorandum of understanding with the City of Bellingham to work together to restore fish passage at the dam. Several design efforts and feasibility studies were undertaken without approval of a feasible solution.

The project was re-initiated in 2017 when American Rivers became a formal partner, with funding provided by the Paul G. Allen Family Foundation for project management and coordination, as well as planning and construction. The private foundation funding was critical to development of the project and in leveraging remaining public funding needed for project completion.

The project is managed by the City of Bellingham and American Rivers, with key support from the Nooksack Indian Tribe, Lummi Nation, Washington Department of Fish and Wildlife. Funding and collaboration was provided by the Paul G. Allen Family Foundation, City of Bellingham, National Oceanic and Atmospheric Administration, U.S. Fish and Wildlife Service, Puget Sound Partnership, Puget Sound Acquisition and Restoration Fund, and the Open Rivers Fund, a program of Resources Legacy Fund supported by The William and Flora Hewlett Foundation. Additional project partners include Long Live the Kings and American Whitewater.

“The Middle Fork Nooksack River Fish Passage Project will benefit both fish species and people. The newly accessible areas of the river will provide Puget Sound Chinook salmon, bull trout and steelhead additional spawning and rearing habitat and the expected increase in population abundance for Chinook salmon will, in turn, help the southern resident orcas. The river holds cultural significance for the Nooksack Indian Tribe and Lummi Nation, and the relocation of the City of Bellingham’s water supply intake maintains a reliable drinking water supply for the city’s residents. This project will continue to deliver multiple benefits over the long term. The Partnership is pleased to be involved as a funding partner in this project through the Puget Sound Acquisition and Restoration Fund, and we are deeply grateful to the many other partners and funders who have made this project possible,” explained Laura Blackmore, executive director of the Puget Sound Partnership.

The Nooksack River watershed, located in northwestern Washington, spans parts of Whatcom and Skagit Counties and reaches north into British Columbia. The watershed covers more than 830 square miles and contains more than 1,000 miles of streams and rivers, spanning three main Nooksack River tributaries – the North, Middle and South Forks. From the flanks of glaciers on Mount Baker, the river flows through forests, farms and towns to Bellingham Bay and Puget Sound.

“The teamwork and innovation at the heart of this project exemplify the approach that we take with the Open Rivers Fund for dam removal and river restoration across the American West. It’s just what we need to address our increasingly urgent 21st Century water infrastructure challenges, while achieving benefits for people, fish and wildlife. We’re pleased to have supported this inspiring team of partners,” said Julie Turrini, director of the Resources Legacy Fund/Open Rivers Fund.

Before the arrival of non-native settlers to the area that is now known as Whatcom County, the Nooksack Indian Tribe had intimate knowledge and use of the Nooksack River, inhabiting areas throughout its watershed, including the isolated section of the Middle Fork. Historically, the Middle Fork was a place for hunting, gathering, solitude and spiritual practice. Today, the Middle Fork Nooksack is a Traditional Cultural Property and has been nominated by the Tribe as a Place of Significance. The people of Nooksack and their descendants see the area as part of their cultural identity and wish to continue their traditional practices.

“Restoring the Middle Fork Nooksack River to its free-flowing state will benefit wildlife, ecosystems and people—from native tribes and residents of communities that rely on a sustainable source of clean drinking water. Hopefully the success of this collaborative project will serve as a model for other states seeking to restore rivers while meeting community needs,” concluded Nicole Cordan, project director at The Pew Charitable Trusts.

Lummi Nation’s Usual and Accustomed area for fishing, hunting and gathering reserved by the 1855 Point Elliot Treaty is far reaching through the Puget Sound area and includes the San Juan Islands, Fraser River in Canada and Nooksack River watershed where the dam removal project is taking place. Early Chinook are an integral part of the heritage and culture of its 5,500 community members. The Tribe is working to restore salmon fishing back to mid-1980s harvest levels by restoring salmon habitat in the watershed and providing harvestable fish through hatchery production at its three salmon hatchery facilities.