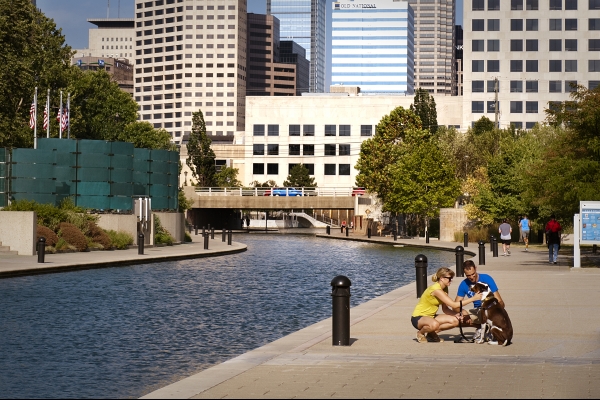 Indianapolis, Indiana is often touted as the largest U.S. city not on a body of navigable water, but don’t be fooled: Streams and rivers abound in the Indiana capital.

But, like most American cities, Indianapolis has a history of turning its back on its waterfronts. The White River flows through downtown, joined by Fall Creek, Pogue’s Run, Central Canal, Pleasant Run and Eagle Creek, many of which also flow through Indy’s most underserved neighborhoods.

Indeed, nearly 96 percent of the population lives within a 10-minute walk from a body of water, but sewage and pesticide-filled runoff have polluted the White River in particular, making the waterways undesirable.

An effort to bring residents back to the waterways was actually launched in 2012, with the founding of Reconnecting to Our Waterways, a coalition of organizations, government agencies and nonprofits promoting the health and appreciation of Indy’s rivers.

In 2016, poets, dancers, composers, musicians and visual artists have joined the effort, working with scientists to interpret the waterways and the challenges that face them in myriad ways.

Mark Kesling, co-chair of Reconnecting to Our Waterways, is also the founder and CEO of the daVinci Pursuit. Through it, he has been promoting an experimental model for public science education that goes beyond museum walls.

Indianapolis actually doesn’t have a science museum, and instead of advocating to build one, Kesling has asked, “How do you activate the city as a learning community?”