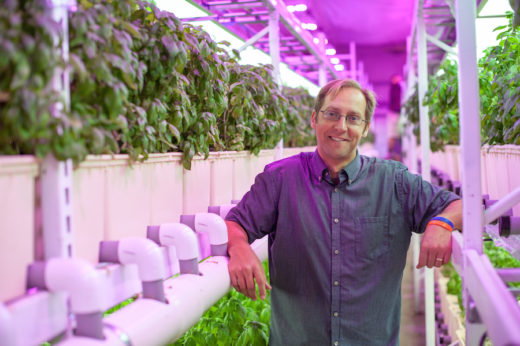 When most people think of urban agriculture, places like New York City or San Francisco instantly come to mind.

But in Indiana, a state more associated with large farms growing commodity crops like wheat and soybeans, there’s a quiet revolution taking place in Indianapolis. Mission-driven urban farm programs are trying to solve the big city problems of urban renewal, job opportunities for the disenfranchised, and feeding the hungry who live in so-called “food deserts” without access to fresh, wholesome food.

In this city of fewer than one million people, Indianapolis has an out-sized problem with food insecurity. In 2014, it topped the real estate company Redfin’s list of worst cities for food access.

Over the last few years a number of diverse organizations have banded together to deal with the issue, creating unique partnerships that have resulted in an urban farm that donates all its produce to food banks, a restaurant—complete with micro-farm—where the proceeds go to feeding food-insecure students, and a high-tech hydroponic farm that provides jobs for folks who need a second chance. Modern Farmer spoke with several of the people involved in these projects to see how they are dealing with food insecurity in their city.

The city’s newest urban agricultural venture, Farm 360, was launched late last year with the twin missions of employing local folks, especially those who been incarcerated and have had a hard time finding good work, and repurposing blighted properties in the city’s Near Eastside neighborhood.

In a nondescript warehouse, the growers at Farm 360 are growing vegetables through a hydroponic system that is 100 percent powered by renewable energy. Sustainable Local Foods Indiana, in partnership with the Englewood Community Development Corporation, selected the warehouse site with the goal of injecting energy and resources into an area that has been federally designated as a “Promise Zone,” highlighted by the Obama Administration as high priority for redevelopment. “We like to repurpose what we consider to be underutilized buildings in communities where it can add real value,” said Bloom.

Photo of Joe Bowling by Esther Boston, courtesy of Farm 360.