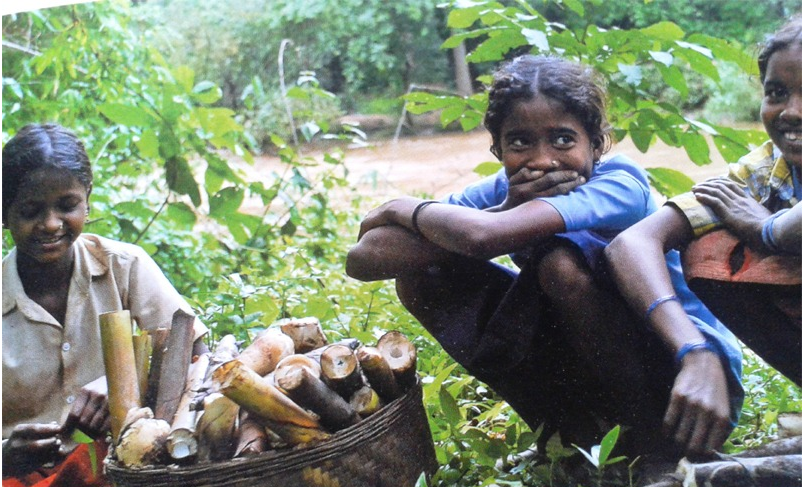 The Khond community is a large indigenous tribal group of India that has relied for generations on a rich and diverse variety of native millets and foraged jungle foods. That is, until the state forest department proposed that forest lands be cleared for cash crops like teak, eucalyptus, soy, and cotton.

The non-profit group Living Farms has documented more than 350 high-nutrient forest foods harvested by adavasis in the region—foods, researchers say, could provide a solution to micronutrient deficiency, a condition termed “hidden hunger.” Inidigenous people who have sustainably harvested forest food for generations, are being displaced, and their knowledge lost as forests are cut down for agriculture and industrial purposes.

Resisting that fate, the women of Khalpadar in the hills of Odisha have risen to block destructive development. They have held meetings with officials and other villages to find consensus to save their forests. When officials repeatedly refused to listen, villagers cut down the cash crops and planted their own traditional crops.

“We planted dates, mangoes, jackfruit, tamarind, jaamkoli [a berry],” says Balo Shikoka, a Khalpadar villager. Forest officials notified the police, who soon came to arrest the villagers. “We said, Fine, we will go to prison for this. But you will have to take all of us—women, children, elders, everyone. We will all go to prison for the jungle. We’ll stay in your jail, but we won’t eat your city food. The officials just left,” Shikoka laughs.

“When they came to persuade us to plant eucalyptus and teak, we refused,” recounts Timoli Kurunjelika, another villager. “Even though they said, You will get more money.”

The soil, damaged by plantations, took time to replenish. The trees took years to regrow. But their efforts paid off, and today, after much work, the hills around Kumruka are flourishing with indigenous trees, plants, and flowers.

“This year, from June to July alone, we have regrown jungles in 35 villages in Muniguda block,” says Sukhomoti Shikoka, a resident of Muniguda. “About 6,000 families have got involved, each planting 10 to 15 trees. Now the nutrition needs of our children will be well met, even when rains are gone.”

Living Farms was founded in 2005. They work with landless agricultural laborers, marginal, small farmers, forest dependent communities and Adivasis on issues related to food security and sovereignty. The organization is based at Odisha in the Eastern part of India. This region is particularly vulnerable to food insecurity and malnutrition being home to some of the poorest communities in the world. About 90% of the communities in the region that Living Farms works with are below the national poverty line.