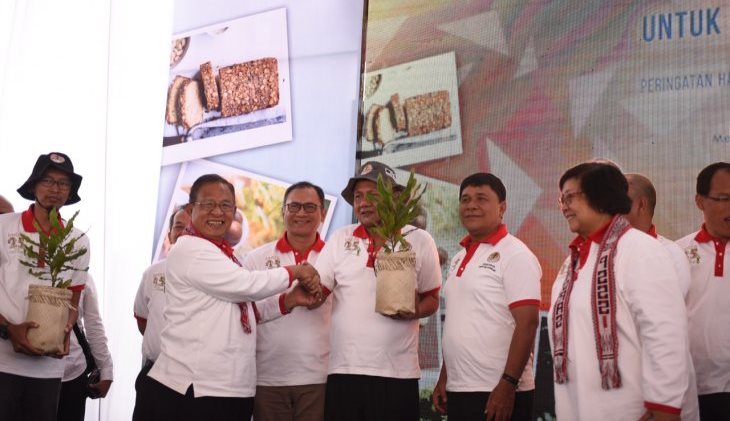 One of the universal factors encountered worldwide during economic development discussions—especially those involving land use—is balancing the needs of humans with those of wildlife. Such discussions are often bitter when dealing with sprawl projects that seek to entirely replace lands that are providing valuable ecosystem services with residential, commercial or industrial development.

They are often more harmonious when dealing with already-destroyed ecosystems. In North Sumatra, Indonesia, vast swaths of forest have been removed, leaving little but dry, overheated, barren dirt, rather than living soil.

Waiting for an equally-vast ecological restoration effort to be funded might take decades, so local officials have devised a way of restoring life to the soil—and to local economies that have been devastated by the loss of their forest—using macadamia trees. 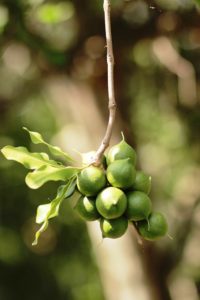 Macadamia nuts on a plantation in Hawaii. Photo credit: MorePix via Wikipedia.

Granted, macadamias are not native: they come from Australia. While some purists might object to the use of a non-native plant, others might choose to enjoy some form of environmental restoration over continued lifelessness. Macadamias aren’t invasive, and covering these dead areas with trees would help restore the soil, the watershed and the climate. Over time, with the restoration of shade and water, local species could once again get established, either within the macadamia groves or on the periphery.

“By the time the macadamia trees are five years old, the farmers can harvest the expensive and richly flavored nuts,” Darmin said on July 4, 2019. He added that the plant was already being cultivated elsewhere in Indonesia, including Solok in West Sumatra, Rembang in Central Java, Bondowoso in East Java.

“This plant can withstand soil erosion and is resistant to fire. Our task now is to make locals aware of the tree’s benefits to the environment as well other potential benefits,” Darmin continued. They could generate about income potential, from Rp200 million to Rp1 billion ($14,000 – $70,000 USD) per hectare in revenue. 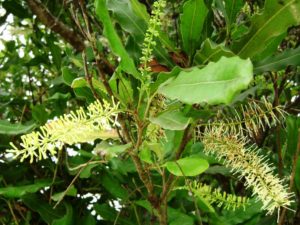 Macadamia integrifolia, native to Australia, are a flowering tree in the family Proteaceaestart. They produce nuts at the age of five, with 12 to 25 kilograms of fruit (wrapped around the nuts) produced annually. About 40 meters high when mature, they are native to northeastern New South Wales and central / southeastern Queensland, Australia. Its fruit can be consumed by the community after removing the nuts.

North Sumatra Governor Edy Rahmayadi, explained that there are some 1.3 million hectares (2.9 million acres) of devastated “critical land” in the province that could benefit from this approach.