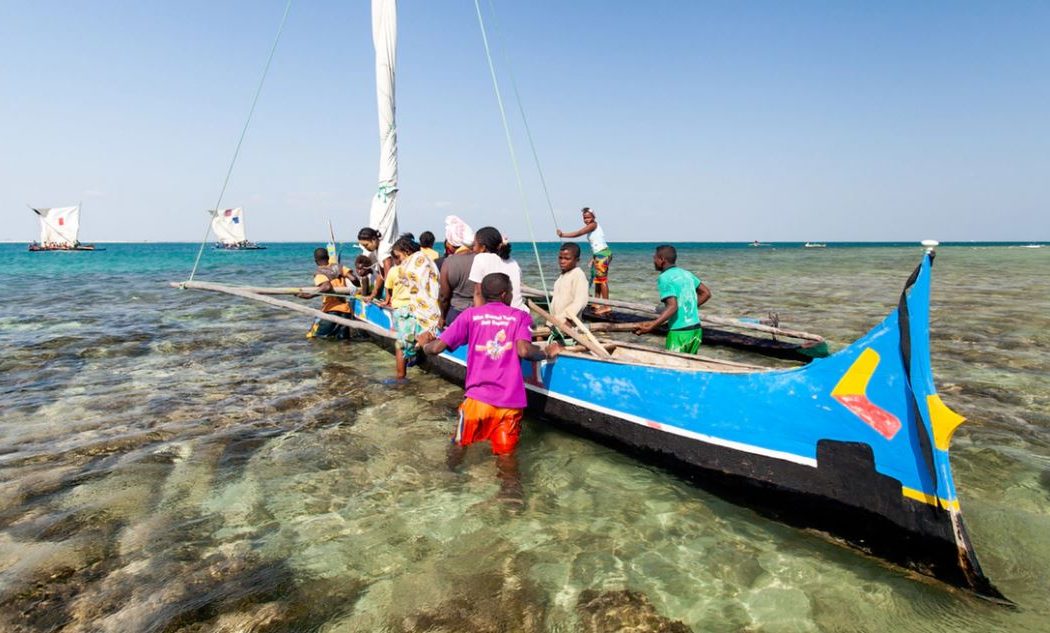 North Sulawesi is a province of Indonesia. It’s located on the northern peninsula of the island of Sulawesi, on the Minahasa Peninsula south of Philippines and southeast of Malaysia. The province’s capital and largest city is Manado, and it has a population of about 4,400,000.

In 1991, 20 hectares of pristine and biodiverse mangroves were cleared in Tiwoho Village, part of Bunaken National Marine Park, as part of a nation-wide program of aquaculture development known as the Blue Revolution, which has resulted in the loss of over 1,000,000 hectares of mangroves nation-wide.

The aquaculture venture operated only for a period of 6 months, and the land lay fallow for the next decade. Six attempts to plant mangroves took place over the intervening years, but none of these attempts succeeded, as a result of failure to restore a functional hydrology to the system, which is the limiting factor for successful mangrove rehabilitation. 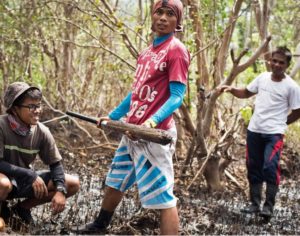 In 2004, the principles of Ecological Mangrove Rehabilitation were applied to the site in a collaboration between villagers, local universities and NGOs, and international ecologists.

The CIFOR report linked to below shows how they brought to life this pivotal rehabilitation effort, the first of its kind in Indonesia where communities were enjoined to repair the hydrology of an abandoned shrimp pond complex to promote natural regeneration of mangroves.

This pilot project has led to the successful rehabilitation of over 2000 hectares of mangroves in other parts of Indonesia, and serves as an example of collaboration and adaptive management that is changing the way Indonesian practitioners address mangrove restoration. 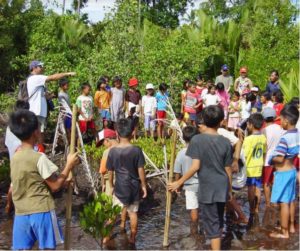 Nature has an amazing ability to heal itself, but sometimes requires the assistance of humans to set it on track. Such is the case in Tiwoho Village, where a whole community dived into the mud, armed with only hand tools, to restore the way water flows in and out of their beloved mangroves. The results have manifested themselves as 400,000 true mangrove trees representing more than 25 species, growing tall and healthy in a free-flowing coastal forest.

The community of Tiwoho is proud of their restored mangrove forest, receiving visitors from Indonesia and across the world every year to learn from their handiwork. Numerous families enter the mangroves every day, in search of crabs, snails, clams and natural medicines, or simply for some time away from busy village life.

Strategic breaching of dike walls and creation of tidal creeks can be achieved with manual labor as well as heavy machinery. Indonesia currently maintains over 660,000 hectares of shrimp ponds in former mangrove systems, many of which are abandoned or disused. Rehabilitating a portion of these ponds back to mangroves costs only around USD 1000 per hectare, but the long-term value they have for local communities has been calculated at over USD 20,000 per year, every year.

If your community is interested in restoring disused or abandoned shrimp ponds to become productive mangrove forests again, simply Google “Ecological Mangrove Rehabilitation,” or reach out to CIFOR and Blue Forests for technical advice.

The Center for International Forestry Research (CIFOR) is a non-profit, scientific facility that conducts research on the most pressing challenges of forest and landscape management around the world. Using a global, multidisciplinary approach, we aim to improve human well-being, protect the environment, and increase equity. To do so, we help policymakers, practitioners and communities make decisions based on solid science about how they use and manage their forests and landscapes.

Blue Forests is a non-profit organization that helps coastal communities rebuild tropical fisheries. Blue Ventures develops transformative approaches for catalyzing and sustaining locally led marine conservation. We work in places where the ocean is vital to local cultures and economies, and are committed to protecting marine biodiversity in ways that benefit coastal people.

The Blue Forests story started over a decade ago, surveying coral reefs in the Mozambique channel. Vezo communities in southern Madagascar were concerned about the decline of their fisheries, so we supported one village to experiment with closing off a small section of their octopus gleaning area for a few months, to see whether this might boost productivity.

When the closure was re-opened, communities experienced a huge increase in octopus landings and fisher incomes. As news of this remarkable fishery boom spread, neighbouring communities started copying this approach. Crucially, this sparked interest in more ambitious coastal management efforts, leading to the creation of the country’s first Locally Managed Marine Area (LMMA) governed by a small network of fishing villages.

Since then, this temporary fishery closure model has gone viral along thousands of kilometres of Madagascar’s coastline, spawning a grassroots marine conservation revolution with 64 more LMMAs established to date. Today, 11% of the island’s seabed is managed by communities, for communities.

Now, Blue Forests’ work is about much more than octopus. These experiences have guided their journey searching for new approaches to demonstrate that marine conservation can be in everyone’s interest, and that taking less from our ocean can give us much much more.