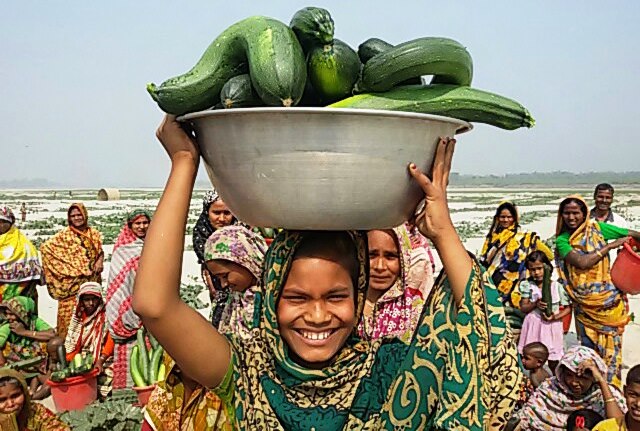 Amena Begum, a 50-year-old entrepreneur who lives in a village called Taluk Shabaz in northeast Bangladesh. At age 20, she married a man named Sekendar with whom she had two children, a girl and a boy.

Sekendar’s health issues prevented him from working, leaving Amena alone to pay for the family’s food, housing, and education. She also discovered that her in-laws were landless — which is economically devastating in a region where owning land is key to financial stability. They had lost their land to river erosion and hired themselves out as agricultural laborers to make ends meet.

The financial stress tore Amena’s family apart. They tried to rent farmland, but decreasing supply kept prices high. Renting one acre for a crop season costs a minimum of $100 USD in that region — a huge sum in a country where the average yearly income is less than $1,500. Frustrated, Amena separated from her husband for several years.

Amena’s story is not uncommon, especially in the impoverished northeast region of Bangladesh where river bank erosion has destroyed the farms and homes of millions of people.

Most of these displaced people take shelter on an embankment or other eroding land, which forces them to leave yet again and continues the cycle of displacement and trauma.

HELP FROM AN UNEXPECTED PLACE

Practical Action, an international charity, focuses on problems of this nature. “These communities used to have houses and farms,” says Nazmul Islam Chowdhury, head of Practical Action’s Extreme Poverty Program. “But all that has been washed away by environmental catastrophes. No one is helping them.” 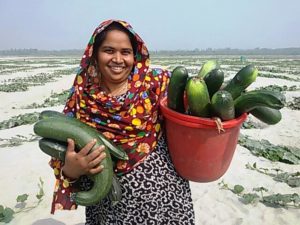 Practical Action helps families in the region grow food by cultivating an unexpected place: the very river banks where their homes and farms once stood.

Pumpkins, squashes, cabbages, sunflowers, and other valuable crops grow quickly in sandy environments, including river banks. During the dry seasons, when the rivers recede, acres of sandbars emerge for a few months.

These sandbars are typically barren, but with an innovative technique of building pits for growing crops, Practical Action helps thousands of farmers just like Amena take advantage of this land.

“The communities become more resilient and able to deal with changes,” says Chowdhury. “We especially focus on building the economic capacity of women… By moving away from traditional agriculture, we can have truly rapid and sustainable growth.”

FROM TRADITIONAL FARMER TO ENTREPRENEUR

While separated from her husband, Amena labored in a garment factory and yearned for the satisfaction of working her own land. She decided to reunite with her husband. With the help of Practical Action, she was able to give farming another chance.

She learned to dig specially-designed pumpkin pits in a sandbar. Using cow dung for fertilizer, she carefully watered 200 pits from a small mug, gradually increasing the amount of water as the plants grew in size. If one of the saplings failed, she would replace it with a new plant. From that first harvest, Amena collected and sold 350 pumpkins for 5,000 Bangladeshi Taka (roughly $61 USD), which she wisely invested in a goat and more seeds. Her next harvest yielded 500 pumpkins, which she used to buy more land.

Venture after profitable venture, Amena amassed a small fortune. She now rears both goats and pond-cultivated fish, which she sells at a profit. She owns a quarter of an acre of land that is fertile year round and three-fourths of an acre devoted to sandbar pit cultivation — both of which she sometimes rents to other farmers. 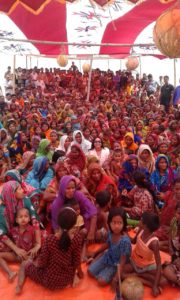 Amena no longer worries about where her food is coming from. She even partners with neighboring farmers to export their crops to Malaysia, Kuwait, Yemen and a number of districts in the country. “All of our products were taken away to Malaysia straight from our courtyard, which gave us such joy,” Amena recalls. “It is a very prestigious matter to export my own cultivated crops!”

Chowdhury beams with pride when he discusses farmers like Amena. “Some people call these workers and these farmers poor, but in reality, they are not. They are the people feeding our nation, they are feeding the world!”

Five years ago, Amena and her family couldn’t count on three meals a day. Today, her son works in a mobile tower company with a good salary and has completed nine years of education. Her daughter is happily married and living nearby. And Amena is currently building a house with an indoor latrine, brick walls, and a floor made of solid concrete.

“Years back I lived in a straw made [thatch] room,” she explained. “Now I live in a tin shed house. Tomorrow I will live in a building. This is my dream.”

The United States through USAID, Sweden through the Swedish International Development Cooperation Agency (Sida), the Government of South Africa, and the Ministry of Foreign Affairs of the Kingdom of the Netherlands are providing this innovator with funding and technical assistance.

This article originally appeared HERE on Securing Water For Food. Reprinted with permission.