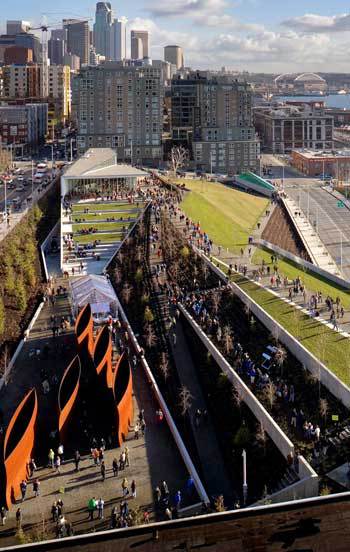 Seattle, Washington has long been an innovator in layering built and natural infrastructure so the two more fully complement each other. Over the past few decades, the city has taken advantage of all that rain so ever-present greenery seems to equal – if not dominate– the roads, bridges, and buildings.

While locals may want even more parks, for someone just visiting the city the first time, Seattle exclaimed Pacific Northwest first and then city. Perhaps it’s the dramatic mountains, with their views carefully preserved from so many places in the city, or the water that is never far away. Or how trees and plants seem to be found everywhere they possibly can be.

In the first of a series of posts on how Seattle has integrated built and natural infrastructure, we’ll look at the Seattle Art Museum Olympic Sculpture Park by interdisciplinary design firm Weiss/Manfredi, with Charles Anderson Landscape Architecture, in downtown.

Here is an example of how an incredibly difficult site with hardcore infrastructure needs — it accommodates a railroad line, four-lane street, riverfront bike lane, and sea wall — was made a true destination with the addition of an inviting green public space that is a showcase for both art and the natural splendor of Seattle.