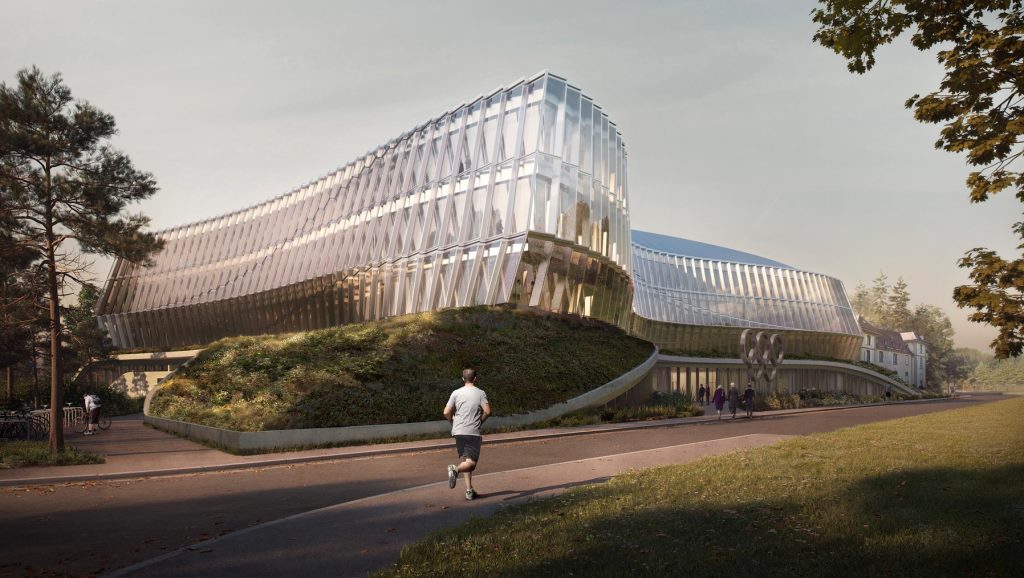 A beautiful new integrated headquarters for the International Olympic Committee (IOC) opened on June 23, 2019—during the worldwide celebration of Olympic Day—at the redeveloped site of one of their former buildings.

For years, IOC staff were scatted around the city of Lausanne in four buildings, making it hard for them to function as a team. This new building on on the shore of Lake Geneva brings them all together. Thus, this revitalized property should, in turn, help revitalize the IOC itself. 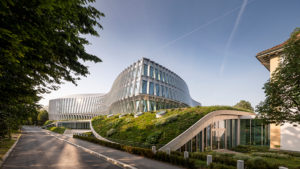 The new $144 million, 237,000-square-foot Olympic House was designed by the Danish architectural firm 3XN, together with local Swiss architects Itten+Brechbühl.

It sits in Lausanne’s Parc Louis Bourget, next to the historic Château de Vidy, which served as their main headquarters building for half a century.

The IOC’s stated missions of international cooperation, transparency and sustainability have now been brought together under one roof, bringing together all 500 of IOC’s employees for the first time. 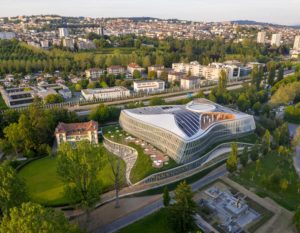 The IOC decided in 2014 to move ahead with the consolidation of its head office, and 3XN was selected to design the project through a multi-stage, international architecture competition certified by the International Union of Architects and led by a jury of renowned architects.

Following the competition, Swiss architecture firm IttenBrechbühl worked in partnership with 3XN to oversee the construction of the project.

3XN approached the project with the intent to achieve the highest level of integration with the unique natural and historical setting of the park. Developed in close consultation with the local authorities, the Olympic House offers the region an emblematic architectural landmark, and becomes an important element of the local Louis Bourget public park that welcomes a diverse group of visitors every year. 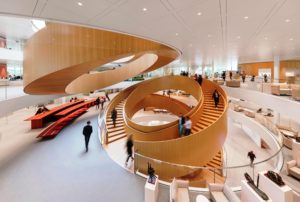 A hallmark of 3XN’s design, the façade of the Olympic House pays tribute to the Olympic spirit by emulating the graceful movements of an athlete.

3XN’s design prioritizes transparency and flow to facilitate and encourage interaction, communication, and knowledge sharing between the IOC staff while creating a highly efficient and sustainable workspace.

The Unity Staircase, which references the Olympic Rings, soars the full height of the building and connects the five floors through a central atrium.

Innovative features that minimize the building’s environmental footprint, without compromising the quality of the workspace, demonstrate the IOC’s commitment to sustainability. The building is designed to meet the most demanding sustainability standards both locally and internationally and has been designed to favor energy and water efficiency, waste reduction and landscape integration.