On December 11, 2019, Invest Detroit announced that they had been awarded a $10 million grant from the Ralph C. Wilson Jr. Foundation. The investment will support the Strategic Neighborhood Fund (SNF) over the next five years to help revitalize commercial corridors and renovate catalytic parks in 10 neighborhoods across the city.

“This initiative is doing crucially important work to help boost these Detroit neighborhoods and create momentum that will spread to even more neighborhoods, ensuring that residents across the city live in thriving communities,” said Lavea Brachman, The Ralph C. Wilson Jr. Foundation’s vice president of programs. 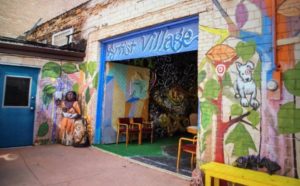 “The Ralph C. Wilson Jr. Foundation is proud to be helping with this key initiative and to partner with Mayor Duggan’s administration and Invest Detroit,” she added.

The announcement was made at Artist Village in Detroit’s historic Old Redford neighborhood, where one year and one day earlier, Mayor Mike Duggan announced that seven corporate partners had agreed to pledge $5 million each to the SNF.

At the time, Mayor Duggan also announced a goal of raising $56 million through corporate and philanthropic organizations, plus $3 million in operational support. Now, with The Ralph C. Wilson Jr. Foundation’s support, the City and Invest Detroit have raised 85% of that goal. 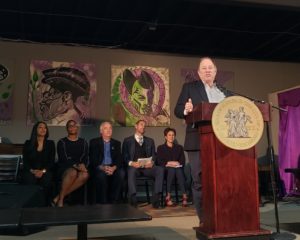 “On behalf of the residents of Detroit, I would like to thank the Ralph C. Wilson Jr. Foundation for this commitment to continue this important work that is doing so much good in our city’s neighborhoods,” Mayor Duggan said.

“They and our other corporate partners have already made an incredible impact, and it is my hope that others will join us in continuing our mission of creating a stronger Detroit for everyone,” he added.

In each neighborhood, the process involves a planning period followed by implementation – in such areas as streetscapes, commercial corridors and parks. This process is projected to take up to four years in each neighborhood and will proceed simultaneously in multiple neighborhoods.

“We are already seeing more investment in Detroit’s neighborhoods than we have in decades, and this will lead to economic growth that brings more jobs, residents and investment. The Ralph C. Wilson Jr. Foundation investment will help to leverage the growing momentum we are seeing into even further and more sustained progress,” he concluded.

Work through the SNF is also designed to ensure that any displacement is avoided, often in partnership with the City’s Affordable Housing Leverage Fund. Residents are engaged from the beginning of the planning process, and the focus is on improving the quality of life in the neighborhoods for those who already live there.

The Ralph C. Wilson Jr. Foundation investment follows $2 million that the organization gave to the first round of the SNF in 2017.