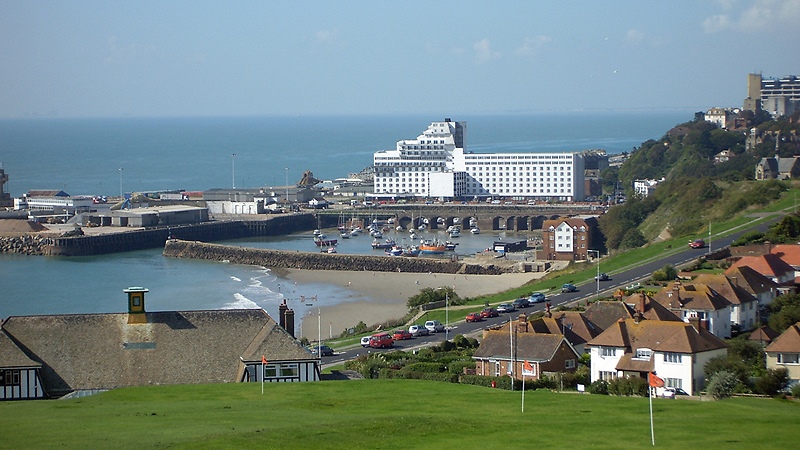 Folkestone is a port town on the English Channel, in County Kent of south-east England. The town lies on the southern edge of the North Downs at a valley between two cliffs. It was an important harbor and shipping port for most of the 19th and 20th centuries.The harbor’s use has diminished since the opening of the nearby Channel Tunnel and stopping of local ferry services, but still remains in active use.

The once-thriving seaside strip was ingrained in Kent’s history as thousands regularly flocked to enjoy the Rotunda funfair, amusement arcades and regular Sunday market. But after being demolished over a decade ago, the site has been left desolate ever since. 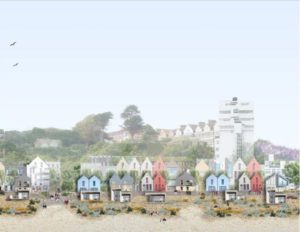 In stepped a Victorian-style benefactor in the shape of billionaire Sir Roger De Haan, whose charitable trust has helped regenerate the whole town, including a £7 million facelift of the Creative Quarter.

Folkestone Harbour Company commissioned Foster and Partners to produce a masterplan for Folkestone which was published in April 2006. The plans described the rebuilding of the harbour as a marina, a “Green Wave” along the sea front linking countryside west and east of the town, new housing, shops, a performance area, and a small university campus. The plans also took in land that was previously the Rotunda Amusement Park.

Progress in redeveloping the area was inhibited by the 2008 recession and by new guidelines governing flood protection. Outline planning permission was granted in 2015 for mixed development based on a Masterplan prepared by Sir Terry Farrell and which met with widespread approval during consultation. Extensive work to prepare the site and construct flood defences. 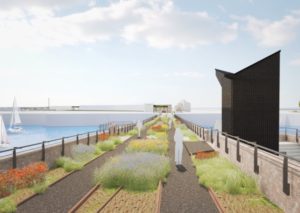 Now, in April of 2017, this long-term project to regenerate Folkestone’s seafront has accumulated approximately £74 million of investment.

The Harbour Arm, formerly used solely for port activities, has been extensively restored and developed as a recreational space and promenade to which the public has access, including bars and restaurants, with entertainment at weekends and on some evenings. The former railway station and harbor viaduct are being reconstructed as a public walkway and promenade, following the full closure of the branch railway in 2014.

Surviving features of the Harbour Arm, such as the glass canopies, will be restored to retain that aura of history. Mr. Bettley added: “The idea is not to leave it as it was, because it was actually a mess, and hadn’t been available to the public for decades. But there are individual features on the Harbour Arm that will also be in the station renovation and on the viaduct that do draw out the history and heritage of the site.”

Regeneration will be shaped around historic structures, including the lighthouse and viaduct which carried trains across the harbor, as a nod to the town’s heritage, explained Peter Bettley of the Folkestone Harbour Company.

See full article by Tom Pyman in the Kent News.